The tree line, located at approx. 1000 m above sea level in Southern Norway, gradually descends and reaches sea level near the North Cape. In addition to numerous coniferous forests, 70% of the afforestation, there are also deciduous forests in Norway. In the south, on the fertile soils, one finds the northernmost foothills of the Central European deciduous forests with oak, common ash, rough elm, Norway maple, hazel, and whitebeam.

In higher elevations and in the north, the vegetation is limited to a kind of thicket consisting of dwarf birches and juniper berries. Many swamp plants, heather and reindeer moss grow on the high plains. In many places along the coast the fertile top layer has disappeared and there is not much growing there. A coniferous forest type with man-sized herbs and ferns grows in moist nutrient-rich valleys and gorges. In the forests of Central Norway you can find many wild fruits: blueberries, raspberries and wild strawberries, among others. Many mushrooms are found in the deciduous and pine forests. One of the most famous large animals in Norway is the moose, which is common in many parts of Northern Norway. Tens of thousands of tame reindeer live mainly in the province of Finnmark and are used as livestock by the Sami. Wild reindeer live on the Dovrefjell. Musk oxen were re-released after WWII because they were eaten for lack of food. Wolves are rare and often come from Sweden. Large animals such as brown bear, wolverines and lynx are still present thanks to strict protection. Arctic fox and arctic hare were hunted for their fur and therefore increasingly rare.

They too are now protected animals. The lemming, a kind of vole, is special. Once every three or four years they move en masse over mountains, through valleys and rivers and lakes cross towards the west coast due to overcrowding. A well-known image are the thousands of lemmings who fall blindly into a ravine and kill themselves, but that is a myth. 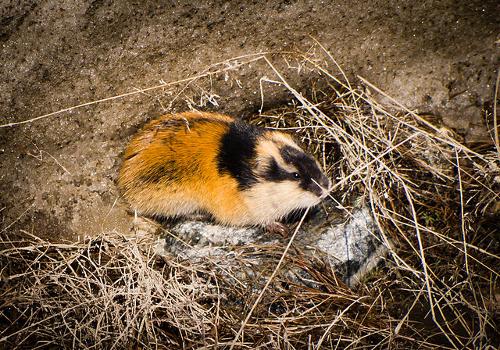 Norway is especially rich in water birds: ducks, gulls, guillemots and the well-known puffin are common. More than 200 bird species are found on some offshore islands. Inland the Western capercaillie is a well-known appearance. The national bird of Norway is the white-throated dipper.

The sea off the coast is very rich in fish, partly due to the high seawater temperature due to the Warm Gulf Stream. Some whale species are found in the Arctic Ocean. Pollock, mackerel and cod are common. To a lesser extent, you will find flatfish, halibut and catfish. The lakes and rivers include salmon, trout, perch, bream and pike. Cold-blooded animals such as reptiles are sparsely represented; the adder occurs only in the south and the small viviparous lizard reaches its northern limit in Norway. Tourists can be bothered by mosquitoes, which are especially abundant in Finnmark.