The Norwegian language and its dialects belong to the North Germanic language group, as well as Danish, Swedish and Icelandic. The country has two completely assimilated (and closely related) writing languages: bokmål (used by about 80%) and nynorsk (20%). The Norwegians owe bokmål to the more than 400 years of Danish rule. It is in fact Old Danish with Norwegian influence and pronunciation. Bokmål is internationally regarded as Standard Norwegian and the Oslo dialect is considered "civilized Norwegian". Nynorsk is derived from the language that is still spoken in Iceland and is most like what the Vikings ever spoke. 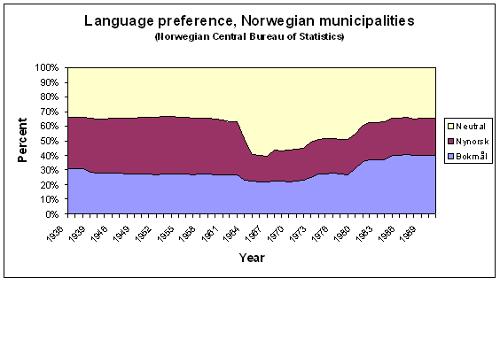 Preference for written languages by Norwegian municipalities in the period 1936-1991Photo: Leifern CC 3.0 Unported no changes made

The majority of the population uses the local dialect as a spoken language. Dialects are therefore highly regarded and cherished by the local population as a precious heritage. Attempts to arrive at one common language, samnorsk, do not get off the ground.
The Norwegian alphabet has 29 letters, and the æ, the å and the o with the slash through them. Sami, the language of the Sami or Lappen, is recognized as the third official language in Northern Norway. Sami is related to Finnish, Estonian and Hungarian. 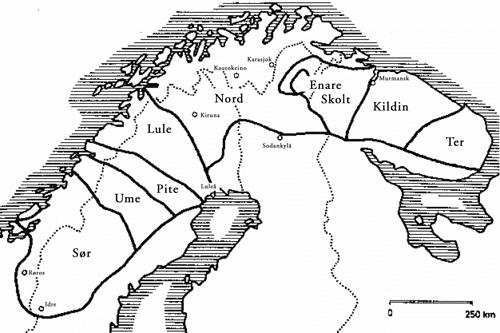 Overview of Sami languages in Northern ScandinaviaPhoto: Rogper CC 3.0 Unported no changes made