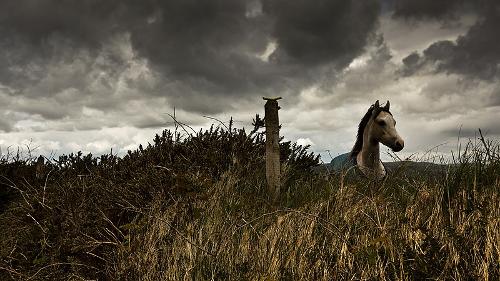 Storm Clouds over IrelandPhoto:Thomas Haid CC 3.0 Unported no changes made

Ireland has a moderate, mild maritime climate. The influence of the Warm Gulf Stream is to blame for this. That is why Ireland does not have warm summers and severe winters. The temperature ranges from about 5 °C in January and February to about 15 °C in July and August. Because it is a fairly small island, there are only minor differences between the various parts of the country. The island is strongly influenced by low pressure areas migrating across the ocean to the European mainland; especially along the west coast it can often be very windy. The average annual rainfall across Ireland is large (approx. 1100 mm). The largest quantities fall along the west coast (1500-2000 mm in the extreme southwest). The capital Dublin is located in the driest zone of the country at approximately 750 mm. The number of days with precipitation is large, as is the average number of rain hours (700-1000 per year). More than half of Ireland's territory has an average of 225 rainy days per year. In the summer there is an average of about twelve days of rain. It can rain for days on end, but it can also be sunny weather for weeks. The least precipitation falls in the spring; the driest months are May and June. In general, snow rarely falls and frost days are also quite rare.