The Arab Republic of Egypt (Arabic: Jumhuriyat Misr al-Arabiya) is a republic in Northeast Africa and is located on the border of Asia and Africa.

Egypt is on two continents; the Suez Canal separates the African part from the Asian (Sinai). The Suez Canal cuts through the Isthmus (isthmus) of Suez from Port Said to Suez, providing the maritime link between the Mediterranean and the Red Sea. The channel is 163 km long, with a width that varies from 365 to 305 meters. The canal has no locks and the passage takes about 15 hours. The sea route from Western Europe to the Far East is shortened by 16,000 km through the Suez Canal. Egypt's territory consists almost entirely of desert, about 96%. The habitable area is only 55,000 km2 and includes the valley and delta of the Nile, the coastal areas along the Mediterranean and Red Sea and a few oases in the Western Desert. Physically geographically, the country can be divided into four areas: the Nile area, the Western Desert, the Eastern Desert and the Sinai area.

The Nile area extends 1250 km from the Sudanese border to the Mediterranean Sea, is a flat landscape, narrow and winding. From the Sudanese border to about 320 km downstream, the narrow Nile Valley cuts through the Nubian sandstone. Lake Nasser has formed here due to the construction of the High Dam near Aswan. Forty kilometers north of Aswan, the alluvial plain is about 10 miles wide and widens from Isna, where the Nile flows between white, steep limestone banks. The greatest width of the Nile valley is 20 km. From Aswan to Assiut they speak of Upper Egypt, then to Cairo of Middle Egypt.

At Cairo begins the Nile Delta (or Lower Egypt), where most of the Egyptian population lives, a triangular flood plain that extends for a distance of about 160 km from Alexandria in the west to Port Said in the east. Immediately inland from the coast is a zone of swamp and brackish lagoons, parts of which are reclaimed for agriculture.

Course of the Nile from origin to EgyptPhoto: Imagico CC BY-SA 2.5 no changes made

To the west of the Nile Valley lies the Western or Libyan Desert (Arabic: Al-Sahra al-Gharbiyah), a very arid plateau comprising about 75% of the total territory, and the easternmost part of the Sahara. This desert has an average height of three hundred meters. The area is made up of three plateaus: two of limestone, the Gilf al-Kabir and al-Diffah (Lybian Plateau) and a large sandstone plateau, the Nubian plateau. Approx. 15% of the desert is covered with sand dunes. The Great Sand Sea (Bahr al-Rimal) stretches for hundreds of kilometers, making it the largest dune area in the world. With a certain dune shape, the so-called sickle dune, the slope becomes increasingly steeper due to the constant wind and small avalanches arise. The dunes gradually move because of this slipping sand. The distance over which this happens varies from a few centimeters to as much as 20 meters per year.

Large oases occur in the seven large and some small depressions where fresh water is tapped. The only desert population also lives there. The largest oases are Siwah, al-Bahriyah, al-Farafirah, al-Dakhilah and al-Kharigah. The al-Qattarah Depression, up to 130 m below sea level and 20,000 km2 in size, is too salty for human habitation and one of the hottest regions on Earth. Temperatures of approx. 60 ° C have been measured. Other deep depressions are al-Fayyum (about 2 million inhabitants) and Wadi al-Natrun. The depressions were caused by a combination of soil subsidence and wind and water erosion. The Eastern or Arabian Desert (al-Sahra al-Sharqiyah) extends from the Nile Valley to the Red Sea and merges into the Nubian Desert in the south. On the north side are two plateaus, the northern and southern "Galala". Parallel to the coast stretches the reddish-brown Red Sea Mountains with peaks of more than 1500 meters: the Dzjebel Shayib reaches up to 2187 meters.

The drainage of the mountains here in the distant past created a network of deep wadis separating the mountain ridges. Nomadic shepherds roam here, who practice livestock thanks to the water from the occasional springs and hidden cavities or that is brought up from under the dry beds of the wadis. Hundreds of meters above sea level, fossils in the limestone show that this area was once a seabed.

The Sinai Peninsula (about 6% of the total area) is separated from the Eastern Desert and the Nile Delta by the Suez Canal and the Gulf of Suez. This irregular, triangular plateau reaches its greatest height in the south, where Jebel al-Deir or Mount Catherine is Egypt's highest peak (2641 m) in a spectacular mountain area. This mountain range was created about 50 million years ago by the drifting of the continental plates. Another high mountain is the holy Dzjebel Musa (Mount Sinai), 2285 meters. 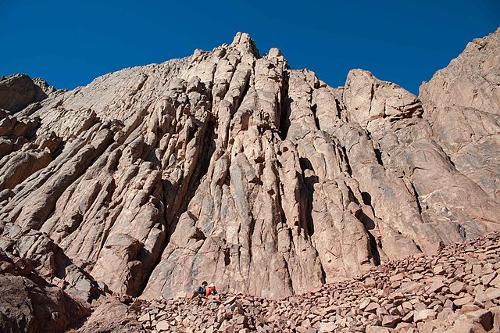 To the north of this mountainous area is the very dry al-Tih Plateau, which is intersected by enormous wadis, and to the north gives way to the coastal plain with a belt of sand dunes. Volcanic rocks, limestone and sandstones provide colorful contrasts of red, green and yellow. 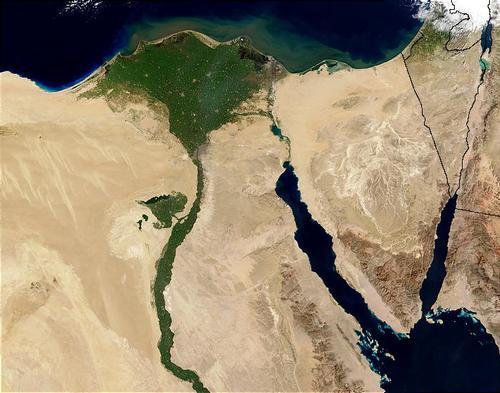 Literally Egypt's lifeline, the Nile Valley is in fact the longest oasis in the world. This river oasis has a total area of 35,000 km2, and stretches for 900 km between Cairo and Aswan. The oasis consists of a narrow strip of fertile farmland on either side of the river that is never more than 20 km wide.

Due to the Ethiopian monsoon rains, the Blue Nile swells so much that the water of the White Nile is blocked. It then floods the surrounding area. The flood water from the Blue Nile reaches Egypt in September, when the supply is greatest: sixteen times as much as the flow rate in May.

The most distant source of the White Nile is in Burundi, 6,825 kilometers from the Mediterranean coast. The Nile is therefore the longest river in the world. In the northern swamp areas of South Sudan, the Gazelle River (Bahr al-Ghazâl), the Giraffe River (Bahr az-Zarâfa) and the Sobat reinforce the watercourse of the Nile. The last 2700 kilometers through Sudan and Egypt, the Nile has no tributaries anywhere. The Nile cuts through the country for a distance of about 1500 kilometers, and enters Egypt just north of Wadi Halfa. River Nile at the height of the capitol of Egpt, CaïroPhoto: Fakharany CC 3.0 no changes made

North of Cairo begins the Nile Delta, an area with an area of 20,000 km2, a maximum width of 250 km and a length of 160 km. This area consists entirely of silt that the Nile has deposited in the Mediterranean. When the Aswan Dam was completed in 1971, this silt deposition came to an end. The Nile flows in two main arms to the sea, the Damietta and Rosetta arms, supplemented by many smaller streams and canals. The river used to have seven arms, but five of them have silted up. Four shallow brackish lakes ("Bahra") form the gateway to the Mediterranean. These lakes are still separated from the sea by narrow headlands. The coastal strip of the delta is also dotted with marshes.

The only inhabited places west of the Nile Valley and the Delta are oases or "wahat" in the Libyan Desert. Enough water rises in seven places to allow permanent residence. These water sources are located in places where aquifers come to the surface. Sometimes those water sources are fed by rainwater that has fallen into the surrounding mountains and accumulated in the soil layers. Sometimes the water comes up from fossil water supplies (25,000-50,000 years old), formed during periods when the climate in the Sahara was much more humid than at present. 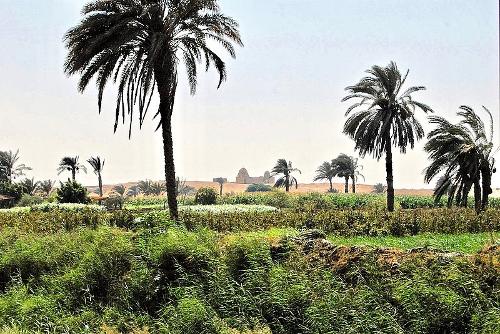 The largest "oasis" is that of al-Fayyum, with nearly two million inhabitants. In fact, it is not a real oasis, as it draws its water from the Nile through the canalised Bahr Yusuf, which flows into the depression at al-Lahun and branches off into a spider web of canals. The oasis of Wadi al-Natrun, 24 meters below sea level, is also becoming increasingly connected with the "inhabited" world, partly through the Cairo-Alexandria road that passes close to it. Wadi al-Natrun is approximately 40 km long, between 8 and 10 km wide. Due to the difference in height, groundwater from the Nile reaches the valley, where it returns to the surface. As a result, in combination with the strong evaporation, salt lakes have formed, which dry up completely in the summer. What remains is table salt and sodium hydroxide, a substance used in the time of the Pharaohs as a component of balm.

Siwa is the most remote oasis and is located at the lowest point of a depression (-18 meters). The oasis has hundreds of springs, 400,000 date palms and an abundance of olives, oranges and grapes. It is an un-Egyptian world, whose inhabitants do not speak Arabic, but a Berber dialect, Siwi. The area around the oasis was a military prohibited zone until 1991, but is now open to tourists and foreign investors.

The oases Dakhla, El-Kharga and Bahariya are elongated ribbons of villages and plantations. The El-Kharga oasis, located 1065 km from Cairo, is very long and stretches for almost two hundred kilometers. A large iron ore mine is located in Bahariya, and a phosphate mine has been opened near the Dakhla oasis. The small oasis Farafra is located on a plain amid sand dunes. The terraced farmlands of the oases are planted with vegetables, fruits, cereals, "bersim" clover, date palms and olive trees. 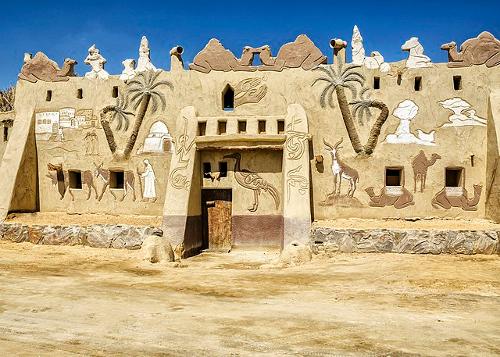