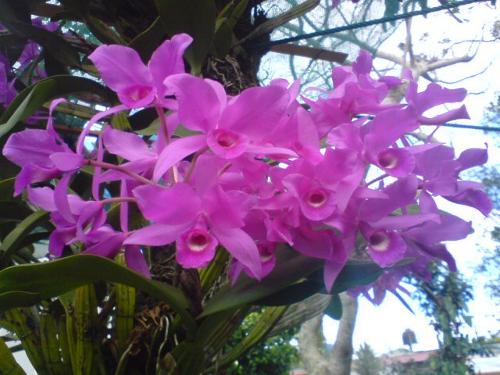 The plant world of Costa Rica is very extensive and varied. There are more than 12,000 different plant species and probably many unknown species still grow in remote areas. It is significant that no fewer than 1200 types of orchids are growing. Climate, soil conditions and altitude ensure the great diversity. Costa Rica's national flower is of course an orchid: the deep pink Guaria Morada.

The vegetation varies from tropical rainforest in the eastern lowlands to dry steppes in Guanacaste. The area of rainforest has been drastically reduced in recent decades and is now only found in fragmented areas, especially in the mountainous areas of the Cordillera de Talamanca, on the Osa peninsula and some parts of the Cordillera Central. The tropical rainforest is dominated by forest giants that can grow up to 60 meters high. Because the bright sun shines constantly on the crowns of these trees, there is a desert climate, as it were, in the tops of the trees. The trees have adapted to this situation through small, thick, leathery leaves. The shrub and herb layer is not much in the rainforest due to the lack of sun. Some common varieties that still grow here are arum and dewclaws. 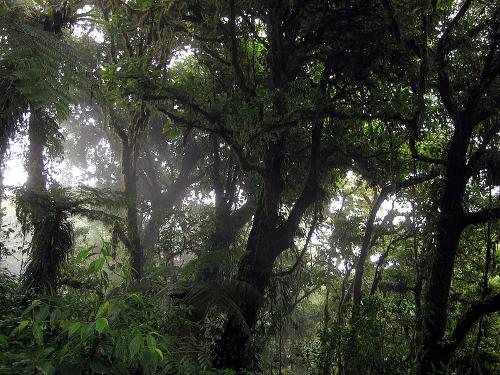 The cloud forest thrives on the slopes of the cordilleras, where the warm rising air from the Caribbean lowlands condenses. Due to the very high humidity in these cloud forests, the plant growth is very abundant and varied. The trees of the cloud forest are somewhat smaller than those of the rainforest and the vegetation on the ground is very dense. A typical cloud forest tree is the copal with its peculiar shapes. Remarkable here are the ferns and lichen and beard mosses (epiphytes) that grow on the trees, including the well-known bromeliad, the "matapalos" or tree bugs (e.g. Ficus benjamina) and lianas. A notable herb on the ground floor is the Gunnera insignis or "sombrilla de pobre" ("umbrella of the poor") with enormous leaves. The Parque Nacional Braulio Carillo is Costa Rica's most extensive cloud forest; other areas are Poás, Tapantí and Monteverde.

In the relatively dry northwest of Costa Rica, the so-called "sabana" vegetation predominates, consisting of grasses, shrubs and rain-green forests with trees that generally do not exceed about 15 meters, including calabash, thorn acacia and olive oak. These deciduous trees lose their leaves in the dry season. But the rain-green forests are also under heavy pressure; many forests have been cleared to make way for livestock farms. They are found almost exclusively on the coastline of the Pacific Ocean and in Costa Rica these types of forests can only be found in the national parks of Guanacaste and scattered on the Nicoya Peninsula. Columnar cacti also thrive in this environment.

A characteristic tree in this area is the unmistakable Guanacaste, a low tree with a spreading crown and bearing huge ear-shaped fruits. Another special tree species in the province of Guanacaste is the "palo verde", the green tree, family of the mimosa and never taller than nine meters and recognizable during the flowering period by its clusters of yellow flowers. Other notable plants are the calabash tree and the American balsam tree, recognizable by its reddish-brown, paper-thin bark and aromatic resin.

Above the tree line, from about 2800 meters, the páramo vegetation dominates. There is hardly any vegetation here, except for some low shrubs, mosses and grasses. This vegetation can be found on the Cerro de la Muerte, the Cerro Chirripó and the Irazú volcano. In the tropical forest of the Costa Central grows, among other things, the "manzanillo de playa", whose fruits, but especially the branches and leaves, contain a poisonous liquid. The La Amistad National Park covers a significant part of the Cordillera de Talamanca. In total, this cross-border nature reserve covers 400,000 ha; slightly less than half is on Costa Rican soil. The area has different climatic zones, each with its own animal and plant world, about which little is known. Many of the more than 10,000 plant species that scientists have mapped are endemic and therefore do not occur anywhere else in the world. The same applies to a number of animal species. In 1983 UNESCO placed La Amistad on the World Heritage List.

La Amistad, together with the Chirripó and Cahuita National Parks, with a number of protected forest areas, animal reserves and buffer zones, form the Area de Conservación La Amistad.

The Reserva Biológica Lomas Barbudal is a small reserve, yet there are several plants that are rare in the rest of the country, including mahogany, Panama redwood, gonzalo alves, cortez amarillo and rosewood.

A common tree on the Caribbean coast is the bread tree, a descendant of the Southeast Asian bread tree. This species was introduced to the West Indies in 1793. From there it was brought from Jamaica to the province of Limón. The 20-meter-high evergreen tree has dark green, glossy leaves that can grow up to a meter in length. 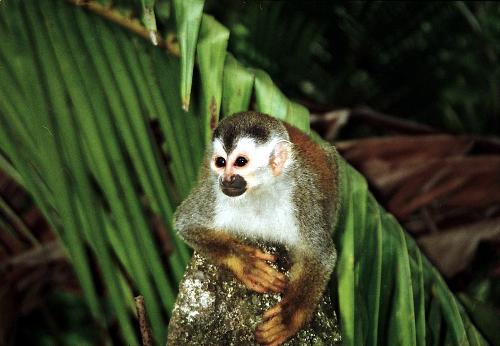 There are four species in Costa Rica that are scattered across the country: squirrel monkeys, howler monkeys, spider monkeys and capuchin monkeys.

Tooth-poor mammals such as armadillos, sloths and anteaters are common in Costa Rica.

The anteater family consists of three types: the giant anteater, the tamandua and the dwarf anteater.

Two types of sloth live in Costa Rica: the two-toed sloth and the three-toed sloth.

The nine-band armadillo is found all over Costa Rica and inhabits the most diverse ecosystems.

Feline predators evolved in North America and did not reach South and Central America until the isthmus between the Americas came into being. In addition to the well-known jaguar, the following felines also live in Costa Rica: puma, ocelot, margay, and jaguarundi.

Other predators include the coati or coati, the raccoon and the roll-tailed bear or kinkajoe.

The largest mammal order in Costa Rica is that of bats, of which about a hundred species occur. They are not only insect eaters but also eat fruit, nectar, mice and frogs.

Well-known apparitions are the fishing bat, vampires and the tent bat.

Special rodents are the agouti or golden hare and the paca. Ungulates are not very common, only a few species of dwarf deer (including Virginia deer and white-tailed deer), parrot and white-lipped pigs or bristles, and tapirs.

A remarkable appearance is the porcupine. In the waters of the Refugio de Fauna Silvestre Barra del Colorado in northwestern Costa Rica, the waters are full of sábalo or tarpon, robaló or Caribbean pike, guapote, macarela or mackerel and the gas fir or leg pike. The gaspar is sometimes called a living fossil because this fish belongs to the order of the ray-finned. The heyday of these fish was in the middle of the Mesozoic Era, about 210 to 150 million years ago. The order of the bony fish originated from this order. 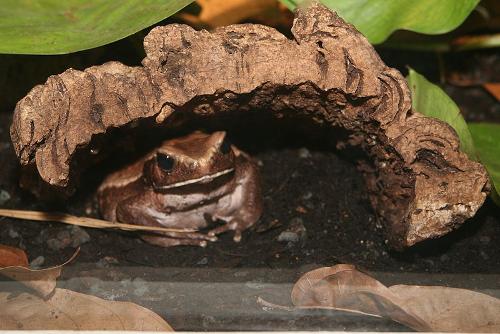 The Monteverde Cloud Forest Biological Reserve was the only area in the world where the rare "Sapo Dorado", a golden toad, was found. These unique animals have not been seen for several years.

The Lomas Barbudal reserve is especially important for insects. More than 250 species of bees have been counted here, as well as many species of wasps, butterflies and moths.

Parque Nacional Cahuita is important because of the coral reef that extends 500 meters off the coast. Dozens of species of coral live there, including: elk antler coral, brain coral, fan coral or sea fan, star coral and fire coral. Beautifully colored fish swim between the coral, such as the blue-yellow colored angel fish, the black-yellow colored angel fish, the troepial fish or duke fish and the blue parrot fish. Barracudas, stingrays, three types of sharks and six types of moray eels also live on the reef.

The Parque Nacional Corcovado is a rainforest area with an enormous wealth of plants and animals: 6000 insects, 500 tree species, 367 bird species, 140 mammals, 117 reptiles and amphibians and 40 freshwater fish have been found in the park. 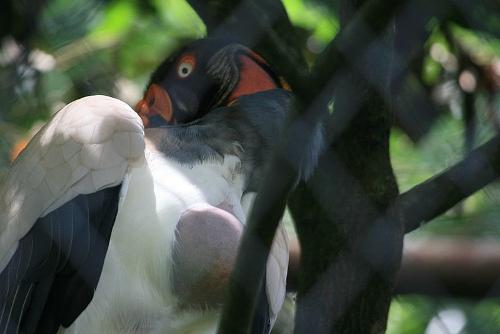 With more than 800 bird species, 200 of which are migratory birds, Costa Rica is a true paradise for bird watchers. Costa Rica's national bird is the inconspicuous Grays thrush.

Costa Rica's most commonly observed birds of prey are a number of vulture species: turkey vulture, black vulture and the rare king vulture. The latter bird is still found in the Lomas Barbu Valley Reserve and the Corcovado National Park. Among the small birds of prey, the laughing falcon is very striking, as are the bald-legged screaming owl, the piebald tawny owl and the crested owl.

Large waders and other water birds live along slow-flowing rivers, such as the pink spoonbill, white ibis, the rare scarlet ibis, wood stork, black-bellied whistling duck, blue-winged teal, night heron and the large but rare jabiru. A number of heron species are the cow heron, the tiger bittern and the barge-billed heron.

Special tropical birds are the brightly colored trogons, including the beautiful quetzal. The quetzal was once the sacred bird of the Aztecs, and even Costa Rica's national currency is named after these special birds. This bird mainly lives in cloud forests at altitudes between 1000 and 2500 meters. 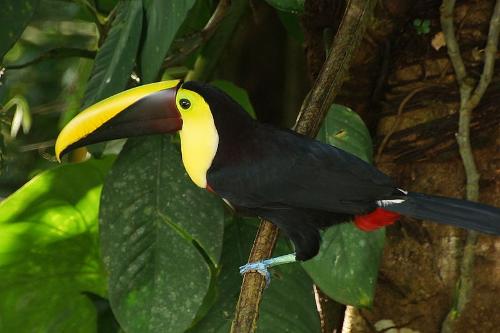 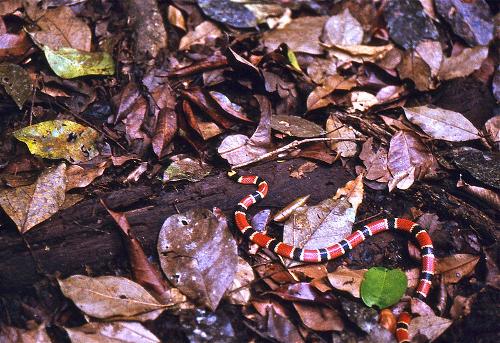 Of the 135 species of snakes found in Costa Rica, 17 are poisonous. As far as venomous snakes are concerned, Costa Rica actually has two groups, the pit vipers (including the lance point snake or fer-de-lance) and the coral snakes. The largest snake in Costa Rica is the boa constrictor, a non-dangerous strangulation snake with a maximum length of 3.5 meters.

Costa Rica has a number of impressive lizards, of which the iguanas and basilisks are the most striking. The largest iguanas are the black and the green iguana. Basilisks are actually iguanas too, but have distinctive combs on the head, back and tail. A common reptile is the alligator lizard.

Santa Rosa National Park is one of Costa Rica's most important protected areas. On Playa Nancite, in the south of Santa Rosa, hundreds of thousands of sea turtles come ashore every year between September and December to lay eggs. Costa Rica is therefore one of the most important nesting areas for sea turtles.

In 2015, it was announced that a new species of glass frog, the only 2.5-large Hyalinobatrachium dianae, had been discovered in Costa Rica. 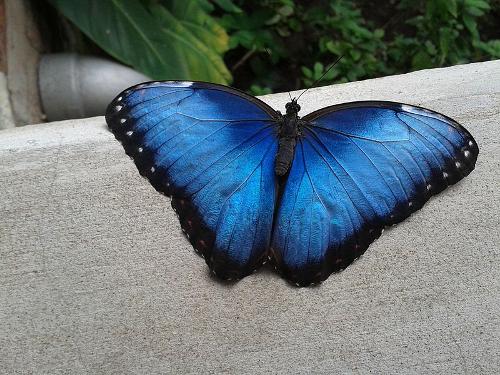 Costa Rica has about tens of thousands of different insect species including stick insects, termites, parasol ants, praying and saber crickets. In total, about 3000 butterfly species have been counted in Costa Rica, including the beautiful blue morpho, heliconius butterfly, owlet and large pintails.

American scientists have discovered a vegetarian spider in the jungles of Costa Rica and Mexico, it was announced in October 2009. The Bagheera Kiplingi lives in South America and feeds on the leaves and buds of plants. As far as is known, the Bagheera Kiplingi is the only one of the more than 40,000 spider species that is not a carnivore. Since no prey has to be caught, the animal does not spin a web.