In general it can be said that Costa Rica has a subtropical to tropical climate with a dry season from December to April and a wet season from May to September. Due to its location near the equator, there are hardly any temperature differences at sea level. The temperature differences between the hottest and the coldest month do not exceed 4° C. The annual averages are on the coast at 26 to 27° C, at 1000 m altitude at approx. 20° C and at 3000 m altitude at 7 to 8° C.

The average annual precipitation vary between 2000 mm minimum and 4000 mm maximum. Strongly affected by trade winds and depressions in the Atlantic Ocean, the Caribbean coast receives significant rainfall all year round in the form of tropical downpours; more than 3000 mm on average and in the Barra del Colorado reserve in the north more than 6000 mm. Sometimes in a certain year there is between 8000 and 9000 mm. September and October are the driest months here.

The area along the Pacific coast has a dry and a wet season. In the northwest there is rainfall "only" between 1000-2000 mm per year ("tierra caliente") and between December and April there is hardly any rainfall and it is distinctly dry, hot and sunny. This is because the entire area is then in the rain shadow of the mountain ranges. 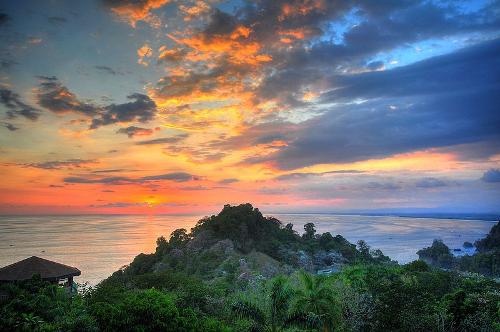 Between 600 and 1650 meters is the temperate zone or "tierra templada", including the Meseta Central with the capital San José. The average minimum temperature there is 16.3° C and the average maximum temperature is 24.9° C. Annual rainfall is between 1600 and 2000 mm.

Areas between 2000 and 3300 meters form the "tierra fría", with temperatures of 10 to 16° C, especially in the higher parts of the Cordillera Central and the Cordillera de Talamanca. On the high peaks of the Cerro Chirripó and the Irazú volcano, the average temperature does not exceed 7° C. Snow rarely falls, but temperatures can drop below freezing.

Hurricanes crossing the Caribbean from the Atlantic Ocean usually pass through Costa Rica along its northern border. As a result, the country has relatively little to do with natural disasters compared to a number of neighboring countries. In the rainy season, however, there are occasional floods in the lower areas.