California, nicknamed the 'Golden State', with an area of 411,049 km², after Alaska and Texas, is the third largest state in the United States. The largest county in California alone, San Bernardino, with an area of 52,200 km² is much larger than the Netherlands (41,526 km²). California is on average about 1300 km long and 400 km wide, the widest point is 587 km.

California is bordered to the north by Oregon, to the south by the Mexican state of Baja California, to the west by Nevada, to the southwest by Arizona and to the east by the Pacific or Pacific Ocean with a coastline of about 1,350 km. 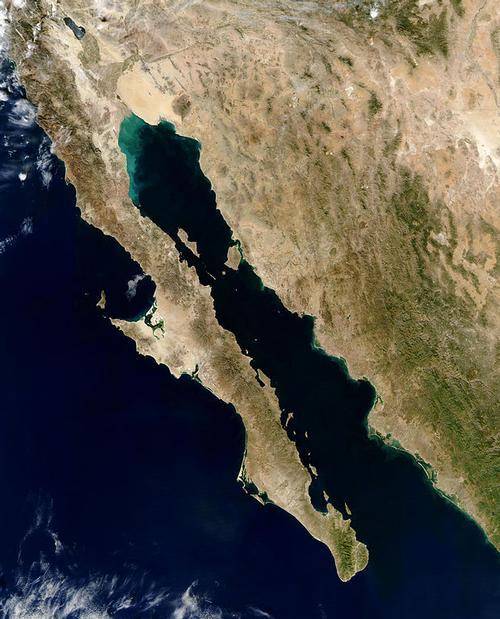 Much of the coast of California is flanked by the rugged mountains of the Coast Ranges, which hold back a lot of rain, especially in winter. The Coast Ranges are, as it were, interrupted halfway through San Francisco. The often fog-shrouded coastal strip north of that city is sparsely populated. Central and Southern California have a much milder climate and most people live there. In the far north of the Coast Ranges, rainfall exceeds 3000 mm in some years, and in some places a further 300 mm is added by prolonged fog in the summer. These conditions, in combination with a fertile soil, meant that the landscape from Big Sur to Oregon could be dominated by forests with the gigantic redwood trees as eye-catchers.

In northeastern California is the Lassen Volcanic National Park, with the active Lassen Peak, the largest stratovolcano, a composite volcano composed of solidified lava, in the world (3,187 m). Lassen Peak belongs to a chain of volcanoes that extends into Washington State, including Mount Shasta (California, 4316 m), Mount Saint Helens (Washington, 2550 m) and Mount Rainier (Washington, 4392 m). 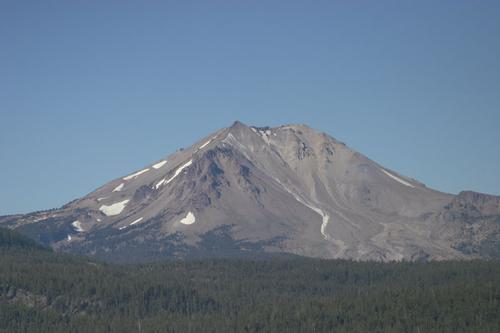 The eastern flanks of the Coast Ranges gradually flow into a hilly landscape that flows into the Central Valley, once an inland sea that has developed into the most important agricultural region in the United States, home to half of all American fruit, vegetables and nuts. cultivated. The Central Valley, 750 km long and 80 km wide, has a desert precipitation average but receives abundant water from the Sierra Nevada mountain range. The Central Valley used to be a swamp area and populated by millions of animals, now it is a fully cultivated agricultural landscape with extensive arable areas and large cattle ranches. 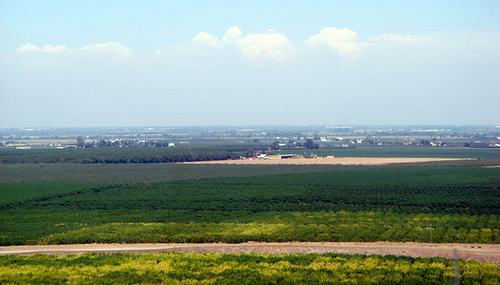 To the east of the Central Valley looms the Sierra Nevada, one of the largest mountain ranges in the world with a length of approximately 640 kilometers, a width of 112 kilometers and 13 peaks with a height above 4200 meters. Part of the Sierra Nevada, the High Sierra, often located above 2700 meters, is a fascinating landscape of glaciers, carved granite peaks and remote ravines.

The rising Sierra Nevada absorbs storms and the associated precipitation, which falls above 3000 meters in the form of snow and is therefore a popular winter sports destination. Melting snow eventually flows on both the east and west sides of the Sierra Nevada into six major river systems that deliver the water back to the agricultural area of the Central Valley and to major cities such as San Francisco and Los Angeles. 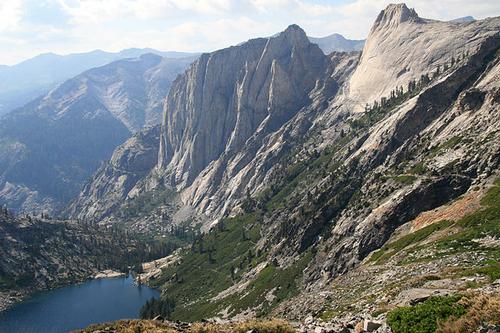 Because the western slopes of the Sierra Nevada trap almost all rainfall, most of the land east of the mountain range is dry and desert-like with less than an average of 25mm of rainfall per year. Here you will also find the most inhospitable lunar landscapes of the Sierra Nevada. Only a few valleys look a bit greener and agriculture and livestock farming are possible there. In the eastern Sierra Nevada, surrounded by 4000 meters high mountains of the Inyo Mountains and the White Mountains, lies the deepest valley in the United States, Owens Valley (1200 meters). In this area is also the highest mountain in the United States outside Alaska, Mount Whitney (4418 m).

The Modoc Plateau in Northeast California is a 'cold' desert, covered with hardy plants such as juniper bushes and sagebrush. Temperatures are rising rapidly towards the south, especially after the transition from the alkaline Mono Lake, one of the oldest lakes in the world, to the Owens Valley east of the Sierra Nevada. This southern desert area (part of the Mojave Desert) includes the Death Valley, which measures 140 miles from north to south, one of the hottest places on earth. A little further south, the Mojave Desert merges into the Colorado Desert or Low Desert (part of the larger Mexican Sonora Desert) around the Salton Sea. The total area of the desert areas in California is approximately 65,000 km². Death Valley is home to the highest sand dunes in California, the more than 200 meters high Eureka Sand Dunes. Between San Francisco and Santa Barbara, in the Guadalupe-Nipomo Dunes Preserve, are the Mussel Rock Dunes, the highest sea dunes in the world. Most of the Mojave Desert is at an altitude of more than 600 meters. 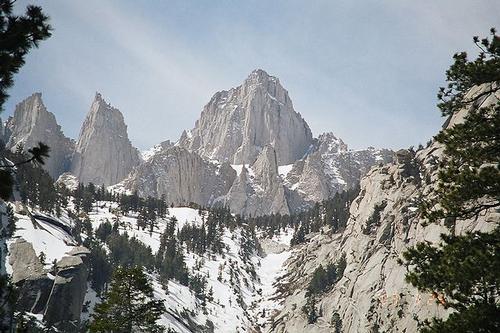 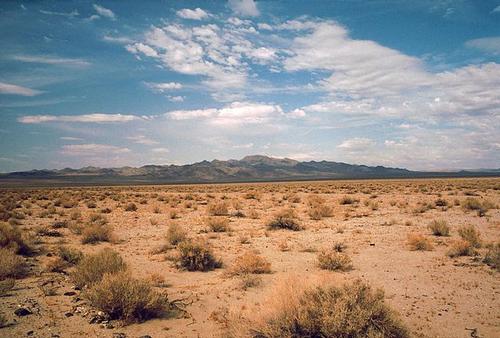 The southernmost glacier in the United States is the Palisade Glacier in the Sierra Nevada. Currently, the glacier has an area of 0.8 km² and is 1300 meters long and 800 meters wide. The glacier is now at an altitude of between 4100 and 3700 meters and moves about 6 meters per year.

In Yosemite National Park, El Capitan, one of the tallest monoliths (1095 m) in the world, towers over the landscape of the Yosemite Valley. Even higher is the Half Dome, which is more than 1500 meters high and rises almost vertically. 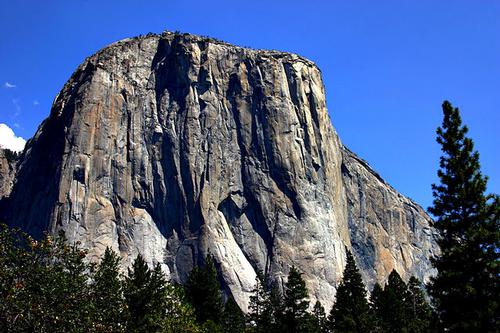 Just south of the coastal town of Santa Barbara are the eight largely uninhabited islands of volcanic Channel Islands, or Archipiélago del Norte in Spanish (total area approx. 900 km²). The archipelago can be divided into a southern and a northern group of islands. In the south are the islands of Santa Barbara Island, San Nicolas island, San Clemente Island and the largest (194 km²) and most populated island, Catalina Island, with approximately 4000 inhabitants. Catalina Island, about 40 km from the California coast, is a true tourist attraction with approximately 1 million visitors annually.

The northern group of islands consists of Anacapa Island (actually consists of two islands, West Anacapa and East Anacapa), San Miguel Island, Santa Cruz Island and Santa Rosa Island. The distance between the northernmost island, San Miguel Island, and the southernmost island, San Clemente Island, is 260 km. The Channel Islands are home to 145 plant and animal species found nowhere else in the world, earning the archipelago the nickname "California's Galapagos".

44 miles west of Point Bonita in the Bay Area are the Farallon Islands, important for nesting seabirds and a resting place for migratory birds.

The largest lake in California is Salton Sea. This man-made lake has an area of about 970 km², lies 69 meters below sea level and is a maximum of 15 meters deep; Another large artificial lake is Lake Berryessa with an area of 84 km2. Clear Lake, one of the oldest lakes in North America, is California's largest freshwater lake, with a coastline of approximately 160 km and an area of approximately 180 km2.

Eagle Lake is California's second largest natural lake with an area of approximately 180 km2. The largest mountain lake and second deepest lake in the United States, on the border of California (two thirds) and Nevada (one third), is Lake Tahoe or 'Big Blue' with a depth of 501 meters. The alkaline Mono Lake, the water of this lake is three times as salty as seawater, in the eastern Sierra Nevada is more than a million years old, the second oldest lake in the United States and in front of the north bank are two volcanic islands, the white Paoha Island and the black Negit Island. Mono Lake is best known for the beautiful limestone deposits or 'tufa', which protrude above the water. West of Mammoth Lake is the Devil's Postpile National Monument where one can find the largest basalt columns in the world.

The Kings Canyon in Kings Canyon National Park is the deepest canyon in the United States with height differences of up to 2500 meters. The Crystal Cave with its beautiful stalactites and stalagmites is one of the most beautiful dripstone caves in the Sierra Nevada. 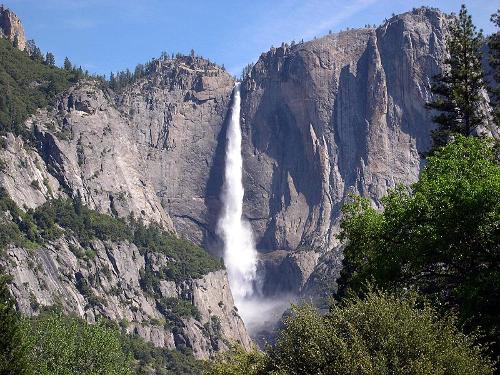 There are many faults under California that can cause earthquakes. The most active and best-known fault is the San Andreas Fault, which extends nearly a thousand kilometers across almost the entire length of California, from Cape Mendocino in the north to the Gulf of California in southern California. The San Andreas fault line is a result of the collisions between the North American Plate and the Pacific Plate, and is one of the few places in the world where tectonic plates meet on land. Every year, California records some 500,000 earthquakes and tremors and the state is in fact a seismic time bomb. 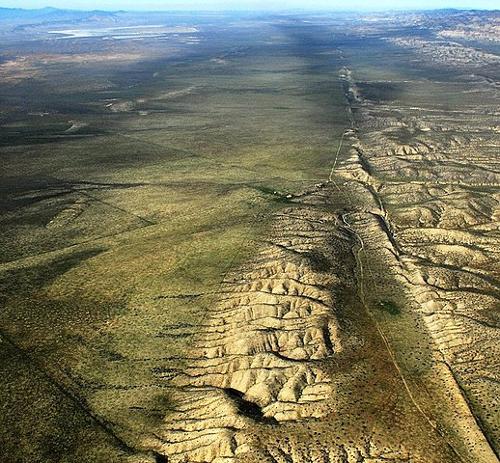 The most severe shocks to date have occurred in the northern part of the fault. Scientists are currently most concerned about the southern part of the fault, particularly around the metropolis of Los Angeles. The last major earthquake in this area, measuring 7.9 on the Richter Scale, dates back to 1857. Scientists say that pressure on the southern side of the fault has been building for over a century and will spread through a likely massive earthquake called the 'Big One', pave its way out and cause extensive damage with many fatalities. Also in the San Francisco region little pressure has been released in recent years, so it is not illogical that a major earthquake is also about to happen there in the near future. In 1906, San Francisco was devastated by a major fire after an earthquake measuring 7.8 on the Richter Scale. In 1989, the city was hit again, with 62 lives and 6 billion damage from the 7.1 Loma-Prieta earthquake on the Richter scale. The 1994 Northridge earthquake had a magnitude of 6.7, the August 2014 earthquake had a magnitude of 6.1. 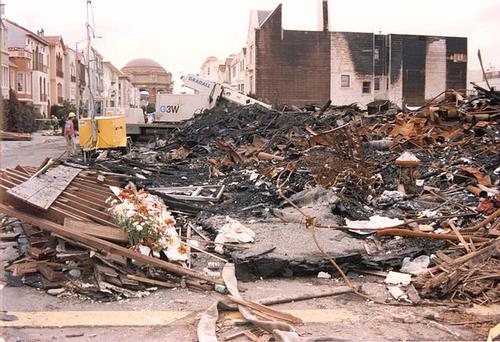