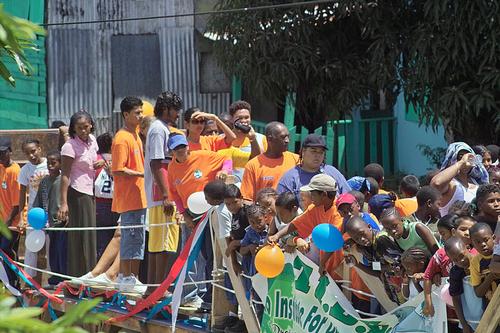 The population is so mixed that it is very difficult to distinguish according to origin. The main ethnic groups are the Mestizos (53%), the Creoles (26%), the Indians (mainly Mayas; 19%) and Black Caribs (7%); there are only small groups of Europeans, Americans and Asians (including Chinese and Taiwanese). It should be emphasized that all these different groups and cultures live together relatively peacefully.

Belize is home to three distinct Maya groups: the Mopan, the Yucatecs and the Kekchi. Although the languages of these groups are related, the dialects are difficult to understand among themselves. The Maya who still live in Belize today are descended from 19th-century Guatemalan and Mexican Mayan immigrants. The Yucatecs live mainly in Northern Belize and their dialect and culture has almost completely merged with the mestizo culture. The Mopan have mainly settled the districts of Toledo and Cayo. The Kekchi also mainly live in the Toledo district. There are about 40 Mayan villages in Toledo. In the most remote villages people still live like centuries ago.

The Creoles all share two characteristics: they are of African-English descent and almost all speak English and Creole. Three quarters of the residents of the Belize City are Creole. Isolated groups of Creoles still live across the country.

The mestizos or ladinos are the Spanish speaking Belizeans, mostly from Mexico and other Central American areas. They descend from the first Spanish colonists and from the Indians. During the eighties of the 20th century, about 40,000 political and economic refugees, mostly mestizos, arrived in Belize from El Salvador, Guatemala and to a lesser extent Honduras. This relatively large group threatens to cause serious economic and social problems for small Belize. They have also ensured that the mestizos are now the largest population group. This was compounded by the fact that many Belizean Creole immigrated to the United States.

The warlike Caribbean immigrated from South America to the Caribbean islands around 1300. They moved from island to island every few years, often married runaway slaves, and eventually ended up in Belize. This group is now called Garifuna or Garinagu and descends from African slaves and Caribbean Indians. They mainly live in Southern Belize. Purebred Caribs no longer exist in Belize. The Garifuna live mainly in Dangriga and on a smaller scale in Punta Gorda, Hopkins, Georgetown, Seine Bight Village and Barranco. They have their own language, religion, music, dance and food, making them a fascinating ethnic group.

The first Chinese arrived in 1865, but soon moved mostly to Mexico. Just before World War II, a group of Cantonese farmers arrived in Belize City, fleeing the Japanese. Although still a small group, they are notable for the grocery stores, shops and restaurants they often own.

From 1844 to 1917, 41,600 East Indies were brought to the British colonies under British colonial rule, including Belize. Although they had a fixed-term contract, they were often forced to stay longer and eventually did not return to their country. Almost 50% of this population lives in a village called Calcutta and Forest Home. They speak Creole and Spanish, but no longer Hindi. This language is still spoken by a number of emigrants from East India who have not lived in Belize for so long. They have no ties with the first emigrants from that area. At present, about 2% of the population is of Indian descent.

The German-speaking Mennonites are the last major group to migrate to Belize. The first group arrived from Mexico between 1958 and 1962. To avoid problems like in other countries, agreements were signed between the Mennonites and the Belizean government. For example, they were allowed to practice their own religion and were allowed to use their language in self-controlled schools. They were also allowed to establish their own financial institutions and were not required to do military service. Mennonite farmers are the most productive in all of Belize and also use the most modern equipment. Furthermore, the local market provides dairy products, eggs, chicken, cheese and vegetables.

A group of Rastafarians live in Belize City. They can be recognized by their dreadlocks and use ganja (marijuana) during their rituals. They consider Haile Selassie, once Emperor of Ethiopia, as their god.

The small group of Lebanese also often works as a shopkeeper. British forces have returned home since 1994.

The largest city is the former (until 1970) capital Belize City, with approx. 62,000 inhabitants (2017). In the course of the 19th century, the population increased sharply due to the influx of Indians, colored people and Spaniards who found refuge there, and by laborers who were recruited in Jamaica, Barbados and Southeast Asia for the sugar and banana plantations. Even after 1900, the population grew due to immigration and natural growth.