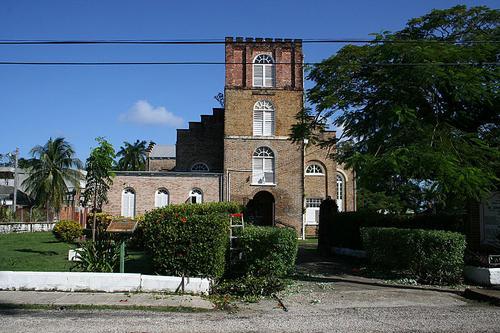 The first Belizeans worshiped a whole arsenal of Mayan gods. British settlers brought the Anglican faith and built the first Protestant church in Central America. However, the majority of Belizeans (about 60%) are Roman Catholic today, thanks to the many immigrants from Mexico in the nineteenth century. About 30% of the population is Protestant, with the majority Anglican and the remainder Methodists, Mennonites, and Pentecostal. For the past twenty years, Belize has been overrun by evangelical and fundamentalist denominations and sects from the United States, such as Assemblies of God, Seventh-day Adventists, Jehovah's Witnesses, Mormons and Baptists.

In the Mennonite Church of Belize, a split is currently taking place: the modernist "Kleine Gemeinde" and the traditional "Altkolonier" each go their separate ways.

The Garifuna are basically Catholic, but still often practice a mix of African and Caribbean ancestor worship, voodoo customs and Catholic traditions. There are also small groups of Muslims, Hindus, Jews and Bahai followers.