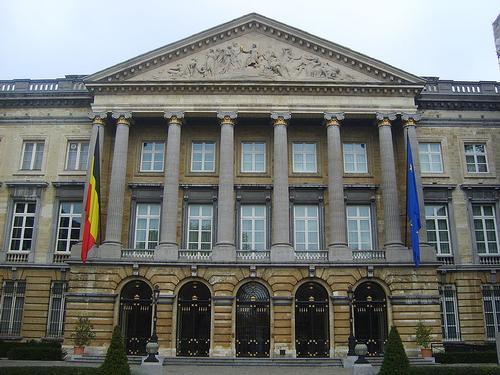 Palace of the Nation BelgiumPhoto: Benjah CC 3.0 Unported no changes made

The Belgian polity is very complex. A 172 year old walks through Belgium dividing line between a Germanic and a Latin culture, which divides the country into a Dutch-speaking and a French-speaking area. A lack of national unity and increasing frictions and conflicts between French and Dutch speakers eventually led to a thorough administrative reform that started in the 1970s.

The Federal State of Belgium was founded in 1995 under the leadership of Prime Minister Luc Dehaene. There are now three equal levels in the unitary state. First, the Federal State, then the three Communities and the three Regions. These three levels of government have equal legal status with regard to legislative and executive powers. Below that, the provinces and municipalities will serve as administrative layers.

Within the Federal State, legislative power is exercised by, on the one hand, the Federal Parliament, which is composed of two assemblies (the Chamber of Representatives and the Senate) and, on the other, the government, in particular the King and the Ministers. The king does not exercise personal power. His ministers have full responsibility for the bills passed by parliament. The person of the King is therefore inviolable and cannot be brought to justice, neither in criminal nor in civil matters.

The members of both chambers are simultaneously elected for a term of four years under the system of proportional representation and universal suffrage. Men and women aged 18 and over have a compulsory vote. In the Chamber of Representatives, the 150 MPs (formerly 212 members) are directly elected by universal suffrage. Instead of 184, the Senate now only has 71 members: 40 senators (25 Dutch speakers and 15 French speakers) who are elected by the population, 21 senators who are appointed by the Communities (10 from the Flemish Community, 10 from the French Community and 1 from the German Community) and 10 co-opted senators (6 Dutch speakers and 4 French speakers). There are also senators who can be added to the senate by operation of law, as a member of the royal family.

The king appoints and dismisses (on the proposal of the majority parties) the ministers and state secretaries, who together form the government. The Council of Ministers (of which the State Secretaries are not a part) has a maximum of 15 members and is led by the Prime Minister. The federal government is composed of as many French and Dutch speaking ministers.

The powers of the Federal State include everything related to the public interest, such as the military, police, justice, social security, energy policy (in particular tariff setting) and public health. The Regions have the power to decide on economic policy, but the state safeguards the economic unity of the country. Communities are competent to decide on culture and education, but compulsory education and diploma requirements are again determined by the state.

The federal state of Belgium has three Communities. It is based on the "language" and therefore speak of the Flemish, French and German-speaking Community.

A Community is responsible for the culture (e.g. theater and libraries), education, the use of languages and the personal issues which on the one hand comprise health policy and on the other hand aid to persons. They are also responsible for the scientific research and international relations related to their powers.

In addition to the federal state and the Communities, the Regions are: the Flemish Region, the Brussels-Capital Region and the Walloon Region. The population elects members of the Regions directly every five years. The legislative and executive bodies are referred to as the Regional Council and the Government of the Region.

In Flanders, the Community and Regional institutions have merged and there is therefore one council and one government.

Regions have powers in domains related to their region or area in the broad sense of the word. They are responsible for the economy, employment, agriculture, water policy, housing, public works, energy, transport, the environment, spatial planning and urban planning, modernization of agriculture, nature conservation, foreign trade and supervision of provinces and municipalities.

The Flemish Region includes the provinces of West Flanders, East Flanders, Limburg, Antwerp and Flemish Brabant. The Walloon Region includes the provinces of Hainaut, Namur, Liège, Luxembourg and Walloon Brabant. The Brussels-Capital Region encompasses the area of the city of Brussels along with the 19 municipalities of the arrondissement. Besides capital, Brussels is the economic, political and cultural center of Belgium. Due to its growing international role since the European Union came into being, Brussels has become one of the most important European business centers. More than 1100 international organizations are based in Brussels or have their European headquarters there. 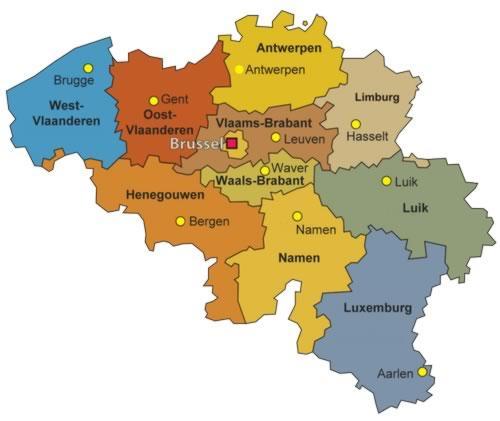 There have been ten provinces since the last state reform. As a result of the latter state reform, the province of Brabant was abolished and replaced by the provinces of Flemish Brabant and Walloon Brabant. The territory of the Brussels-Capital Region falls outside the division into provinces.

The provinces are autonomous institutions, but are supervised by the regions and to a lesser extent by the federal state and the communities. Provinces have a provincial council and its members are elected directly for six years. This council takes decisions of a general nature and takes care of the provincial regulations.

Provinces have broad powers and, among other things, develop initiatives in education, social and cultural infrastructures and social policy. They are also concerned with the environment, roads and waterways, the economy, public works and housing. Although the provinces are autonomous, they are under the control of the communities and regions.

The Permanent Deputation issues permits, among other things, for the operation of industrial, craft, commercial and agricultural establishments that present risks or are harmful and must therefore be monitored.
The provincial governor has powers with regard to security and law enforcement. 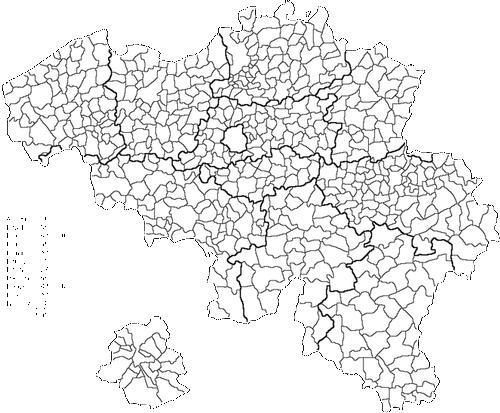 In each municipality, there is a city council composed of 7 to 55 members, depending on the number of inhabitants. The municipal council arranges everything that is of "municipal interest" by means of municipal regulations. The city council elects the aldermen who, together with the mayor, form the College of Mayor and Aldermen. The mayor, under the responsibility of the Minister of the Interior, is appointed by the king from among the members of the city council. City councilors can nominate candidates to the governor.

The municipal powers are very broad and encompass everything related to the "municipal interest", which may be in the areas of public works, social assistance, law enforcement, housing, education, etc.

The municipalities are under the control of the federal state, the communities, the regions and the provinces and must also perform tasks imposed on them by the higher authorities.

The municipalities are also mainly in charge of the police forces, the management of the registry office and the maintenance of the population registers. The mayor is at the head of the municipal police. Each municipality also has a Public Center for Social Welfare that provides social assistance.

Belgium has freedom of education under Article 24 of the Constitution. Education in Belgium is provided in institutions belonging to the official or public sector (communities, provinces, municipalities) and to the special or free sector (especially Roman Catholic schools).

In Belgium, pre-school facilities form an integral part of the educational infrastructure. Parents, on the other hand, are free to let their children between the ages of 2.5 and 6 enjoy this education. Many nursery schools are attached to a primary school and located in the same building.

There is a separate free education system for each of the three official languages and communities in Belgium.

Primary education is aimed at children aged 6 to 12 years, consists of six years and divided into three two-year cycles. Children become compulsory school age in September of the year in which they reach the age of six.

In the Brussels Region, the study of Dutch is compulsory from the age of eight. In the rest of the French Community, a second national language (Dutch or German) or English can be taught from the age of 10.

In the German Community, French can be taught from the first grade and is compulsory from the third year.

In the French Community, secondary education can be divided into two main categories:

Third cycle: degree of determination for students aged 16 to 18 years.

Most students are currently attending type 1 education. For the German Community, only type 1 is available.

The offer in type 2 schools includes a smaller number of general and technical courses. The first cycle of technical education leads to a certificate of lower secondary education. 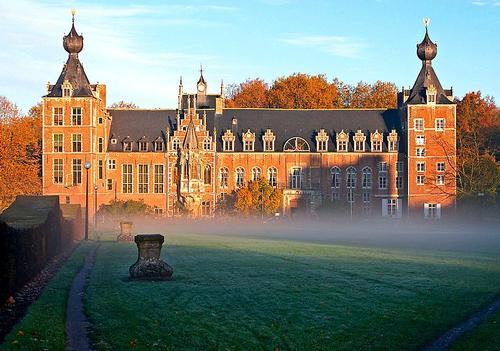 University education is provided at universities or university-level institutions and comprises courses of at least four years divided over two cycles. Each cycle is concluded with a diploma that grants access to the next cycle. Each of these cycles runs over two to three years.

Short-type higher education consists of one cycle of three to four years and covers a wide range of courses of study.

Long-type higher education is equated with university education and comprises two cycles that run for at least four years.

In addition to the six "full" universities, there are a number of university institutions that offer a limited number of courses of study.

The following university diplomas are awarded in the French Community:

-candidate after the first two- or three-year cycle.

-licencié after the two- or three-year second cycle.

Short-type higher education is concluded with a graduate diploma.

In the Flemish Community, the first cycle of university education is concluded with the candidate diploma. The second cycle concludes with the licentiate diploma and the third cycle concerns the doctorate. 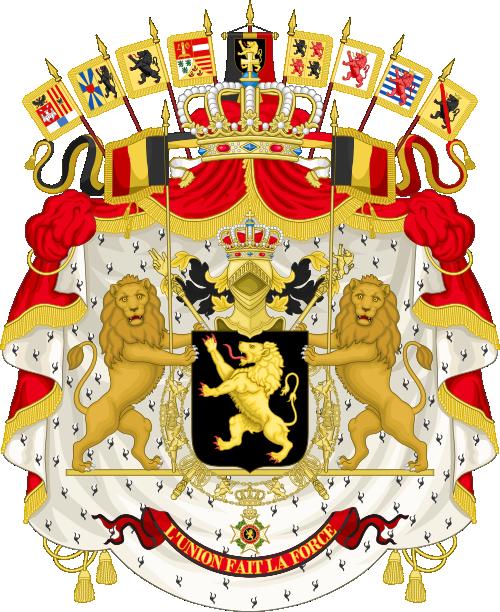 Coat of arms of BelgiumPhoto: Sodacan CC 3.0 Unported no changes made

Belgian domestic politics has been dominated since long time by three political groups: the Christian Democrats, the socialists and the liberals, who rule Belgium in varying coalitions. Since the seventies of the 20th century, these three groups have been divided into regional Flemish and Walloon parties.

The parliamentary elections of July 1999 caused a major shift in the Belgian political landscape. This was mainly due to many scandals in the 1990s, including the murder of Deputy Prime Minister André Cools, the Dutroux affair, the Augusta-Dassault bribery scandal and the contamination of animal feed with dioxin. Major election winners were the Greens and Liberals who, together with the Socialists, formed a government led by Guy Verhofstadt. For the first time since 1958, the Christian Democrats entered the opposition.

The far-right Vlaams Blok is nowadays a significant factor in both Belgian national and local politics. In 1995, the Vlaams Blok was the largest party in Antwerp with 27% of the votes. The current political situation is described in the chapter on history.