Virtually untouched by time, Bruges has grown into a leading Belgian tourist attraction and is one of the best-preserved medieval cities in Europe. In the center of Bruges you will find two beautiful large squares, the Grote Markt and the Burg, where the tourist office is located.

Every year, more than two million visitors in Bruges marvel at the tourist attractions. In the summer at the peak of the tourist season, the influx of tourists creates a feeling of crowds, but a large proportion are day trippers who have long since disappeared in the late afternoon. At that point, you can enjoy a gentle stroll around the relatively compact center and enjoy the sights surrounded by scenic canals.

The centrally located Grote Markt is a good point to start your visit to Bruges. On this square you will find old guild houses and the iconic Belfry tower from the 13th century. The other main public square in Bruges is the Burg, where you can find the Basilica of the Holy Blood. Be sure to visit the Saint Salvator Cathedral and the beautiful Gothic Town Hall. 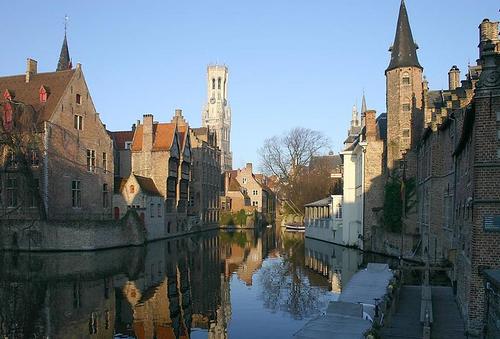 Bruges is the capital of the province of West Flanders in Belgium and is located in the northwest of Belgium, close to the port of Zeebrugge and also near the Netherlands. The territory of the entire city is more than 13,840 hectares. Much of Bruges is surrounded by a long, oval moat that flows around the medieval fortifications. Of the city's nine original gates, four are still standing. The gates date from the 14th century.

The climate of Bruges is temperate, which means that you can visit the city at any time. The main attractions remain open all year round. Spring is a popular time to visit Bruges, the colder winter weather is a thing of the past and the Belgian flora comes alive. Temperatures reach up to 16° C by the end of April.

July and August are always the hottest months in Bruges and because the sun shines a lot, this is the most attractive time for a visit. With Antwerp and Brussels nearby, many day tourists come to Bruges. The temperature can reach 25° C in the summer months.

In November and December, nights have gotten chilly, although frost can only be expected from time to time. January is the coldest month in Bruges. Sometimes it is even possible to skate on the frozen canals, although the temperature is usually above zero during the day. 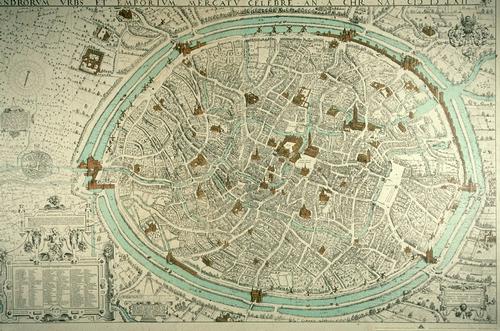 Bruges map made in the year1562Photo:Public domain

The history of Bruges is centuries old. Julius Caesar was responsible for the construction of the first fortifications in the 1st century BC. These were built in an effort to defend the Roman Empire from the very real threat of pirate attacks. Centuries later, the Count of Flanders, Boudewijn I, fortified the already considerable Roman walls and built a castle to protect the area from the invasions of the Vikings in the 9th century AD. The city of Bruges subsequently grew around the castle.

Like most Flemish cities from the Middle Ages, textiles were the foundation of the prosperity and importance of Bruges. Towards the end of the 13th century, Bruges' history was linked to the wool trade. The Wolbeurs entered in 1309 and is considered by many to be the oldest stock exchange in the world. The enormous increase in prosperity caused more and more social unrest. When local guild brothers refused to pay a new tax in 1302, the French army was sent to crush the rebellion. Two local guild leaders, Pieter de Coninck (weaver) and Jan Breydel (butcher), led an uprising that crushed the French garrison. This is now known as the Brugse Metten. There is a statue of these men on the big market.

In the 15th century under the rule of Philip III, the Duke of Burgundy, the city flourished and attracted artists, bankers and other notable people from all over Europe to Bruges. The city's population increased to 200,000 and its local weavers were considered the world's best. The famous painting school known as the Flemish Primitives had its home here. The first book was also printed here in English by William Caxton. The English kings Richard III and Edward IV chose Bruges as the place to spend their lives in exile.

When the Zwin, the river that connected Bruges to the sea, silted up in the 15th century, the economic lifeblood of the city was broken. The Hanseatic League headquarters were moved to Antwerp at the end of the century. Most traders and bankers followed, creating a city of abandoned houses, empty streets and lifeless canals. The next four centuries, Bruges, once Europe's economic heart, went into a deep hibernation.

Strangely enough, this also gave Bruges a new chance. As a beautiful city frozen in time, Bruges made a name for itself and tourists, writers and artists visited Bruges in the 19th century. Wealthy visitors injected much needed money into the local economy and in 1907 a new channel was dredged. This canal connected the city to the new port of Zeebrugge and was called the Boudewijnkanaal.

Although the port of Zeebrugge was severely damaged during both world wars, the city of Bruges itself was unharmed. The preservation of the beautiful historic center of the city led to the modern economy based on tourism. In 2002, Bruges was declared European Capital of Culture. Notable buildings such as the Concertgebouw and the Toyo Ito pavilion were built for the occasion, adding a touch of modern style to the historic heart of the city.

Bruges is a beautiful quiet medieval city where you can wander through the narrow streets with their pavers. The entire city center is a UNESCO World Heritage Site. Some of the most famous sights are described below. 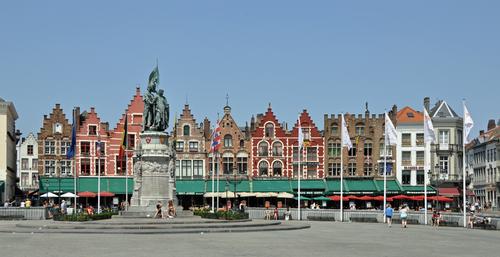 The Grote Markt is a large and spacious square surrounded by tourist attractions and some of the most striking monuments and medieval monuments, such as the many guild houses with their beautiful facades and the Belfry. This tower was built in the 13th century and is today one of the most famous of all the sights in Bruges. Belfry measures just over 80 meters. The view from the top of this clock tower is breathtaking, although many will find climbing the 366 steps to the top challenging and somewhat tiring. Those who choose to climb the tower are rewarded for their effort and pass the 18th-century carillon with its 47 bells, which are still regularly played by the carillonneur.

Sint-Salvator Cathedral is simply known to tourists as the Bruges Cathedral and was built in the 12th century. In the 1840s, the tower was slightly altered due to fire damage. It was at this stage that the tower of the cathedral was made considerably taller than that of the Church of Our Lady to raise the status of the building, shortly afterwards the church gained its cathedral status. Saint Salvator Cathedral has always been a major landmark and contains many historical paintings and tapestries. 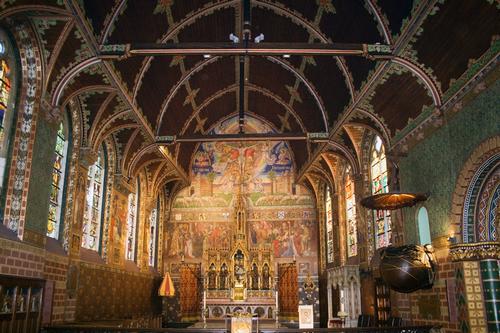 Located in the extreme southwestern corner of Bruges, the Basilica of the Holy Blood is named after the relic of the blood of Jesus Christ, who is said to have arrived here in the 12th century. The church contains many sights that are grouped in two different chapels. The Romanesque lower chapel, and the more elaborately decorated upper chapel. The relic of the Holy Blood is still revered by those who come here on Ascension Day. It is carried through the city streets during the Procession of the Holy Blood.

There are also many interesting museums in Bruges, which show many different subjects and aspects of Belgian history. 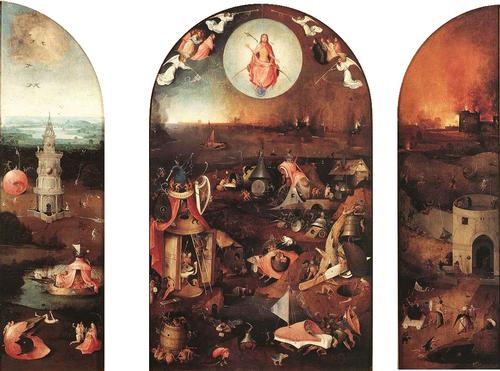 The world famous Groeningemuseum is home to one of the best art collections in Belgium. With paintings from the 14th century to contemporary art, the Groeninge Museum is best known for the extensive collection of Flemish Primitives. Here you can see paintings by famous artists such as Jan van Eyck, Gerard David and Hieronymus Bosch (The Last Judgment). The museum itself is not too big and has 20 different rooms where the collection can be seen in a clear, chronological order. 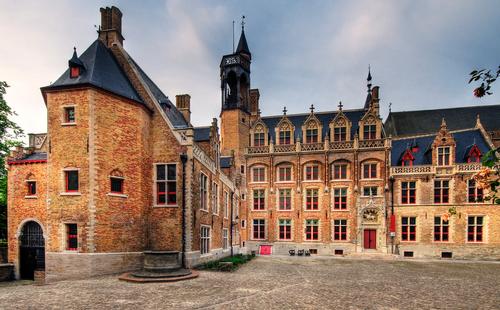 The Gruuthuse Museum consists of 22 different rooms in a large and impressive 15th-century residence adjacent to the Bruges cathedral (Sint Salvator). The Gruuthuse Museum collects decorative and applied art. The main exhibits are only labeled in Flemish and include everything from Belgian antique furniture and silk tapestries to sculptures and other works of art. Interestingly, the Gruuthuse Museum is named after the rather special combination of herbs and flowers used to brew the traditional Belgian beer, known locally as 'gruut'. One of the more unusual exhibits can be seen in the second room where you can see a medieval method of hemorrhoids removal. 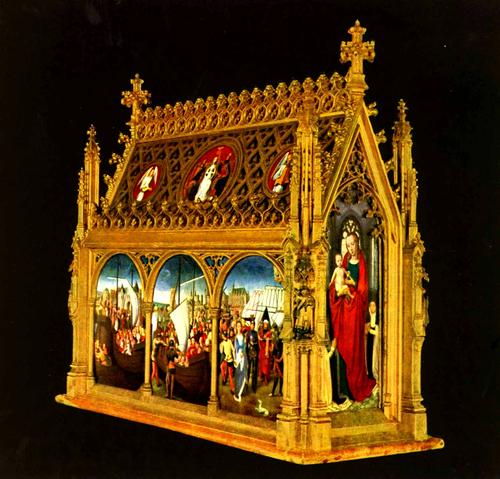 Although the Memling Museum is relatively small, you can see six real masterpieces made by the famous German artist Hans Memling (1430-1494). The Memling museum itself is located in the chapel of the 12th-century St. John's Hospital. Important is the famous Ursula Shrine of Memling, built in the shape of a Gothic cathedral. You can also visit a 17th century pharmacy, which was once part of this medieval hospital. 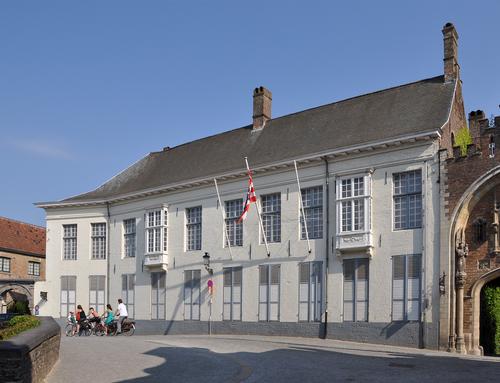 The Arentshuis is housed in a beautiful 18th century country house and stands next to the banks of the river. The museum was once owned by the wealthy local Arents family. The museum houses two separate collections, works of art and lace. The bottom floor contains the Lace Museum, which shows a variety of lace from both Belgium and the rest of the world. Upstairs in the Brangwyn Museum you will be treated to powerful etchings and moody paintings made by the local Bruges artist Frank Brangwyn (1867 - 1956), who is known for his industrial landscapes. 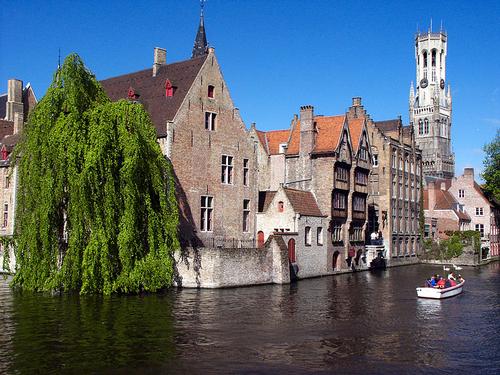 Bruges is also known as the Venice of the North. This is due to the many small canals (Bruges canals) that surround the city. A cruise through Bruges is therefore a popular attraction. In a boat trip of about half an hour you will see the most beautiful places of Bruges from a completely different side. 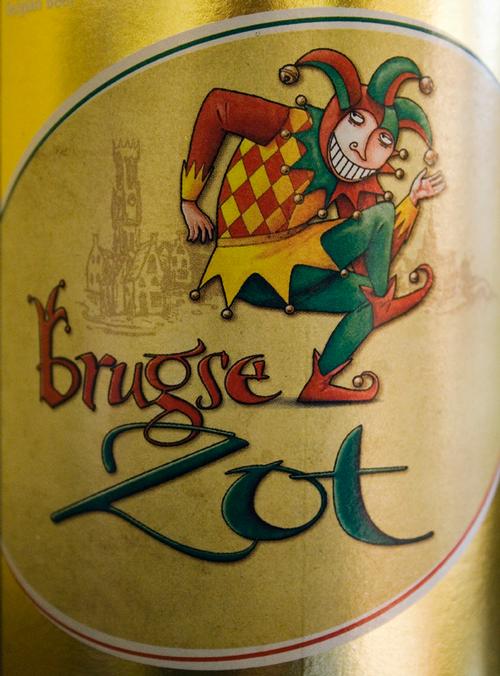 Visit the Halve Maan brewery in Bruges. The only real beer brewed in Bruges is made here. The brewery is located in the historic center on Waldplein. The building also houses a museum.

There is also a real chocolate museum in Bruges. This museum is called Choco Story and tells everything about the history of chocolate. The museum is located in house de Croon from 1480.