Bangladesh, at least according to official figures, is still one of the least developed countries in the world, despite a fairly stable economic growth of about 6% achieved in recent years. For example, the GNP per capita still fluctuates around $ 4,200 per year (2017).

Bangladesh has a regulated market economy with development planning and a large number of state-owned companies. The money of citizens working abroad is of great importance to the Bengali economy. In addition, Bangladesh is in great need of ODA support. With currency reserves barely sufficient for two months of imports, Bangladesh remains vulnerable to sudden economic setbacks, such as frequent floods. In combination with declining population growth, income per capita will rise slightly, but this is not yet leading to a real take-off of the economy. The latter is generally blamed on the inability of governments of different types to implement far-reaching reform and restructuring policies.

Steps are being taken to resume reform policy. For example, a large number of state-owned companies have been privatized and a number of important improvements have been made in the energy sector. A step has also been taken to reduce losses in the financial sector and the budget deficit has been reduced.

There are particular concerns about the lack of foreign investment due to the lack of "law and order".

However, the above description of the economy is called into question by the informal economy, which does not appear in any official document, but comprises an estimated two thirds of the total economy!

The position of women in the labor market is not very bright, many are undervalued, exploited and even abused. Child labor is also still widespread. Millions of children work all day instead of going to school. As an agricultural society, Bangladesh is mainly dependent on arable farming and to a lesser extent on the fish and meat sector. Forestry is also still important, especially in the north and southeast of the country. More than 40% of the population is employed in agriculture and approximately 14% of the national income comes from agriculture.

Rice is the staple food of Bangladeshis and is therefore widely cultivated. There are three main varieties consisting of dozens of modern varieties that guarantee an even higher yield. Most of these varieties are grown in Bangladesh by the Bangladesh Rice Research Institute.

Besides rice, cane sugar, legumes, wheat, linseed and tobacco are important arable products. The cultivation of vegetables is also becoming increasingly important and plantations with bananas, pineapples, mangoes and papayas can be found in more and more places.

Tea is an important export product for Bangladesh, but the Bangladeshis themselves also drink a lot of tea. Bangladesh has about 150 tea plantations (40,000 ha) and together they produce more than 50 million kilos of tea. Jute is also a major export crop, especially to Japan, Germany and Great Britain. Bangladesh is one of the market leaders in jute and jute products. 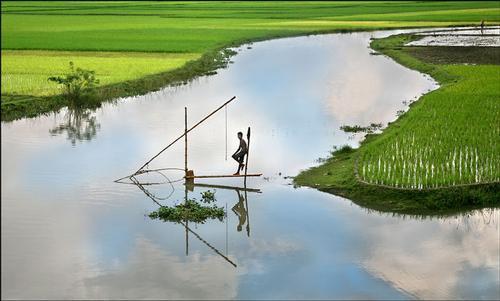 About 70% of the animal proteins consumed by the Bangladeshis consist of fish products. Bangladesh has a fish area of approximately 80,000 km2, consisting of two equal parts of river water and sea water. Many professional fishermen still have small, elongated boats, but there are also more and more mechanized fishing trawlers.

At the beginning of the eighties of the last century, shrimp farming was stimulated, among others by the World Bank. Mainly in the south of the country a large shrimp industry started. Frozen fish and shrimp currently make up about 7% of Bangladesh's exports. 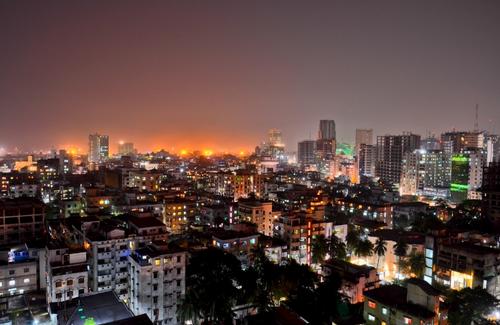 The services sector, including government, banking, trade, catering and transport, supply the largest part of the gross national product, currently about 37% of the total. Tourism is not yet a major source of income for Bangladesh, although the number of tourists is increasing every year. Most tourists come from countries such as India, Pakistan, Japan, Great Britain and the United States. 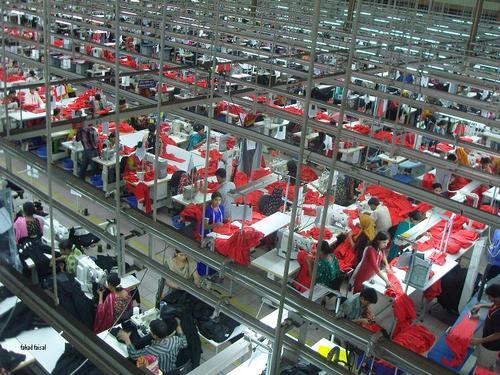 The clothing industry, which produces almost exclusively for export, is the main export product. In the wake of this, Bangladesh is still the largest jute producer in the world. There are currently approx. 3000 sewing workshops, mainly in the cities of Dhaka, Chittagong, Narayanganj, Savar and Tongi.

The textile sector employs more than one million women and several hundred thousand men. A bad thing is still the fact that many children work in this sector. Despite worldwide protests, estimates range from 25,000 to 300,000 children!

However, the textile sector is very vulnerable. This became apparent after the attacks of 11 September 2001, when a boycott of products from Islamic countries virtually halted exports to North America in particular. Many companies had to close and about 300,000 textile workers were laid off. An even greater threat, however, are countries that can produce even more cheaply than Bangladesh, such as various African countries and especially China. 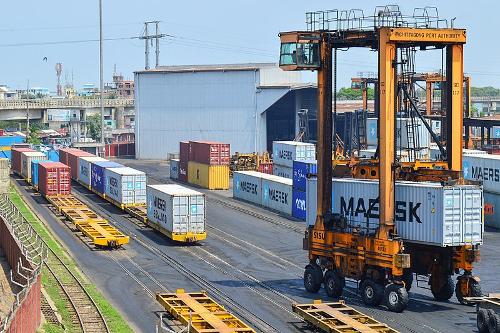 Bangladesh has more than eight thousand kilometers of waterways. Most of it is available continuously, the rest only during the rainy season. Bangladesh has ten major inland ports and approximately 1,500 berths for ferries.

Road transport is getting better and better. Buses connect all major cities and most local destinations can also be reached by bus. Most roads are dual lane and often congested. Trains are much safer than road transport, but because of the many rivers they are often forced to make long detours. From the capital Dhaka there are possibilities to fly to the capitals of the other "divisions". Many smaller cities have airstrips, where smaller planes can land.

Every year, many reasonably to well-educated Bangladeshis go abroad, particularly to North America, Great Britain and the Middle East. As early as the 18th century, many Bangladeshis left for Great Britain, making them the first immigrants to that country. At the moment, approximately 200,000 Bangladeshis leave for the Middle East every year, where 95% do unskilled work. Many leave without valid papers and are helped by people smugglers for a lot of money. A large number of undocumented women end up in the sex industry in countries such as India and Pakistan. In 25 years, more than three million Bangladshi left for a shorter or longer period abroad

The Bangladesh government has even set up a separate Ministry of Overseas Employment as migrants are increasingly important to Bangladesh's economy. Today, the migrants are sending home more than $ 3 billion a year. Through unofficial channels one can easily add one billion dollars to this amount.