Australia ( from the Latin australis = southern); originally was called the "Terra australis incognita" = the Unknown Southland), is the smallest of the inhabited continents and is located southeast of Asia, around 3000 kilometers from Singapore. 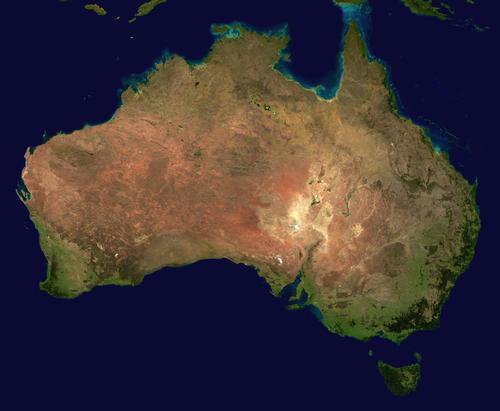 The nearest other country is Papua New Guinea / Irian Jaya, which is located 200 kilometers from Cape York on the other side of Torres Strait. Apart from the South Pole, Australia is the only continent to lie entirely in the Southern Hemisphere. The continent borders the Pacific Ocean on the east side (more specifically the Coral Sea and the Tasman Sea), on the other three sides by the Indian Ocean. Australia has a total land area of 7,682,300 million km2 and a coastline of over 36,000 km. Australia is about the size of the United States (without Alaska). The distance east-west is about 4000 kilometers and the distance north-south about 3200 kilometers. The northernmost point is Cape York, the southernmost South East Cape, the westernmost Steep Point and the easternmost Cape Byron.

Australia has a compact and rounded shape. For example, there are only two notable peninsulas: Cape York Peninsula and Arnhemland. There are also some large sea curves including the Carpentaria wave, the Joseph Bonaparte wave and the Van Diengen wave in the north and the Great Australian Bight, the Spencer wave and the St. Vincent wave in the south.

The average height of 360 meters is the lowest of all continents but Europe. Only 6% is higher than 700 meters above sea level.

The Australian landscape was formed during Earth's earliest history, and the age of some rocks has been estimated at 3 billion years. Australia is therefore called the oldest continent. The last geological changes occurred in the Permian some 230 million years ago. Then mountain ranges were formed whose peaks are above the snow line. Later, some lower plateaus were created on the western and eastern foothills. 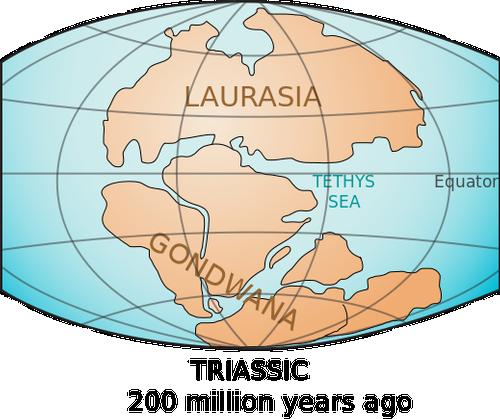 Today's Australia was created about 50 million years ago when it broke away from the great southern continent of Gondwanaland, a landmass consisting of Africa, South America and India. Over the past 100 to 200 million years, the continent has slowly eroded, making the landscape largely flat and the soil relatively sparse.

In the east of Australia lies the mountain country, which descends with a steep edge to a fertile coastal plain that varies in width. Many rivers break through this mountain country and flow through narrow gorges to the ocean. The mountain country consists of high plains, low mountain ranges, basins and valleys, intersected by rivers that form partly deeply cut, partly wide, flat valleys. The backbone of the area is the Great Dividing Range, a mountain range that extends across the Strait of Bass into the mountains of Tasmania. Australia's highest point is Mount Kosciusko (2230 m) in the Australian Alps (New South Wales), other high peaks in this area are Mount Bogong in Victoria (1986 meters) and Mount Ossa in Tasmania (1617 meters). 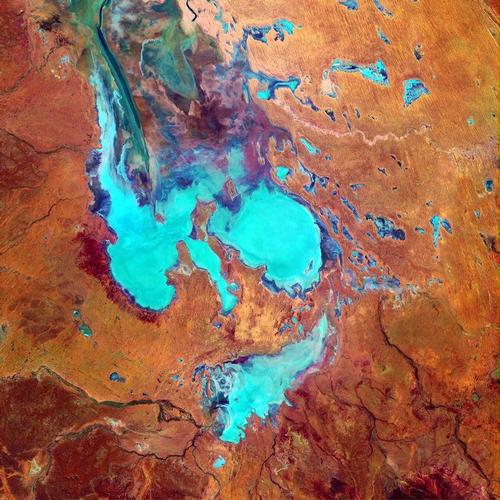 Traces of past volcanism can be found in New South Wales (maars, explosion craters). Australia's last active volcano, located in Victoria, did not finally settle until 6,000 years ago. Towards the west, the mountain land gradually merges into the large plains of the central lowland. The average height there is only 180 m and at the deepest points one even comes below sea level. It is divided into three large basins by low ridges: the northern Carpentaria basin where rivers flow through the vast mangrove swamps that reach the Carpentaria wave; furthermore, the large central Eyre basin (9620 km2), in which Lake Eyre (-12 m) forms the lowest point of the continent. It is one of the driest areas of the earth and consists partly of sand deserts, including the Simpson Desert; the rivers that flow here disappear at some point in the reddish sand and loam soil. The largest basin is the Murray-Darling Basin and is separated from the Eyre Basin by the Gray Range and the Main Barrier Range. Australia's only ever-aquifer, the Murray, flows from the Snowy Mountains. The Murray is Australia's largest river system and flows into a bay in South Australia after 2,600 kilometers. Between the Murray and the Darling is a barren, almost treeless, saline plain. This plain is interrupted only by some gallery forests along the dry beds of some rivers, which only carry water during the rainy season.

The central lowland in the west also gradually merges into the great western plateau. This area is about 500-700 m high, very flat with some mountains here and there, including the Macdonnell Ranges that are separated by the Amadeus Lake from the Musgrave Ranges. In the far west lies the Hamersley Range and in the northwest and north the low table mountains of Kimberley and Arnhemland.

On the Kimberley Plateau is Bungle Bungle, an area of 8000 km2 with thousands of 200 meter high beehive-like sandstone masses with caves in it. In between lie vast deserts consisting of elongated reddish sand dunes (Tanami Desert, Great Sandy Desert, Great Victoria Desert), overgrown with some desert grass, desert oaks and acacias.

In that area are many salt pans and lakes and dry, winding river beds. 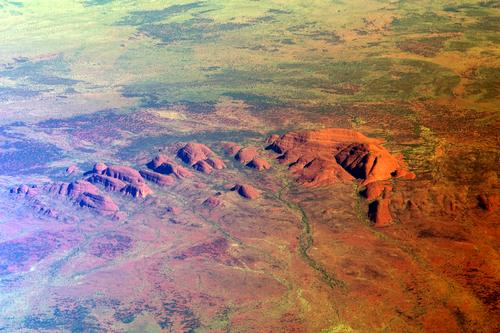 Some mountains such as Ayers Rock or Uluru (Mother Earth), one of the largest monoliths on Earth (3.5 kilometers long, 348 meters high and a circumference of about 10 kilometers), and Mount Olgas or Kata Tjuta (many heads) were chosen as holy places for the aborigines because of their typical shape. The rock formations of Mount Olgas were once a single monolith like Ayers Rock, but later split into the present 36 domes separated by narrow gorges and slightly wider valleys. Two lower lying areas penetrate deep into this plateau landscape: the Canning Basin in the north and the completely flat Nullarbor Plain in the south (Nullarbor is Latin for "no trees"). It is a vast expanse of limestone (200,000 km2 and thus the largest continuous limestone area in the world), the seabed of a 20 million year old sea, with caves, holes and underground rivers, created by rainwater that seeps through the porous rock. It is dry there and there is almost nothing but plants that can withstand extreme drought, such as blue goose foot and melde. Also in the west, the plateau with a steep edge borders the coastal plain, which, unlike the east coast, is dry here with only a few rivers, which flow into salty beach lakes.

Along the northeastern coast stretches the 2,000-kilometer Great Barrier Reef, the largest coral reef in the world, consisting of over 2,000 interconnected coral reefs and 71 coral islands with over 400 species of coral. The Great Barrier Reef is the largest structure built by living things in the world and covers an area that is almost the size of the United Kingdom. 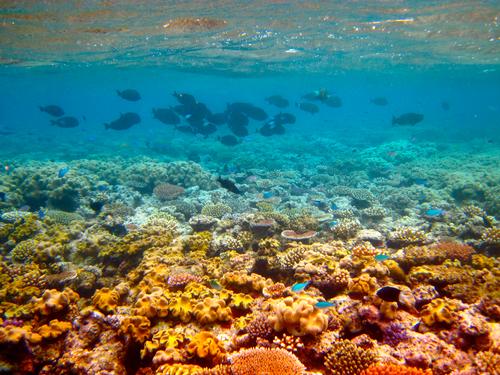 This living and growing reef, composed of algae and skeletons of tiny coral polyps, varies in width from 15 kilometers in the north to 300 kilometers in the south, and is home to 1500 species of fish, turtles, dugongs (manatees), sharks, jellyfish, sea snakes, dolphins and whales. The Ningaloo Reef is the largest coastal reef in the world and follows the coast over a length of 260 kilometers. The coast is approached up to 100 meters.

On the south coast of Queensland is Frasier Island, with its length of 123 kilometers and average width one of the largest islands in Australia and also the world's largest sand island. The island has been included on the UNESCO World Heritage List since 1992.

In Shark Bay lies the 110 kilometer long Shell Beach. This beach is one of the only two beaches in the world that consist of non-fossilized shells. The layer of shells can reach a thickness of up to 10 meters.

The Millstream Falls near Ravenshore is the largest waterfall in Australia during the rainy season. Australia's deepest lake, Lake St. Clair, is located in Tasmania and is 200 meters deep.

Between Barrow Creek and Tennant Creek in the Northern Territory are the Devil's Marbles, hundreds of granite boulders that stretch along the side of the road for several miles. Some of the larger boulders balance on others.

Wave Rock is a bizarre rock formation near the city of Hyden in Western Australia. The rock has the shape of a surf wave 15 meters high and more than 100 meters long. The colorful vertical stripes reinforce the resemblance to a wave.

The Fitzroy River is 600 kilometers long and flows into the sea at King Sound, north of Derby. Rays, lungfish, and sawfish swim in the river, as well as harmless crocodiles. In the wet summer season, the Fitzroy River swells into a mighty stream, flooding the entire area.