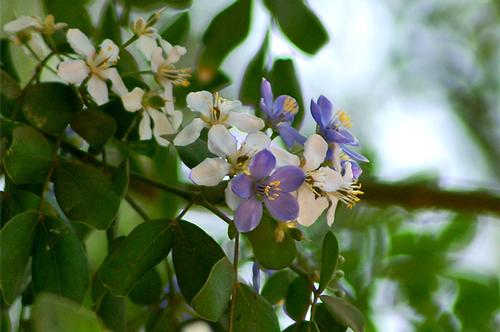 National flower of Jamaica blossom of the Lignum vitaePhoto: Jayesh Patil CC 2.0 Generic no changes made

Jamaica has about 3000 different species of plants, shrubs and trees, of which about 800 are endemic, that is, species that only occur in Jamaica. Jamaica has about 200 varieties of orchids, 550 varieties of fern and 60 varieties of bromeliads. Valleys are full of palm trees, peaks are covered with low mountain forest and bearded mosses. At the time of the discovery of Jamaica in the 15th century, Jamaica was covered with huge forests. Native plants were pineapple, sugar apple and guava. Almost all fruits that now grow in Jamaica were imported after that time, such as bananas, aubergines, cassava, citrus fruits, coconuts and the akee, which is often eaten during breakfast. The hemp plant from which marijuana or ganja is made has also been imported. The national tree is the Blue Mahoe, an endemic hibiscus species; the national flower is the blue blossom of the Lignum vitae. 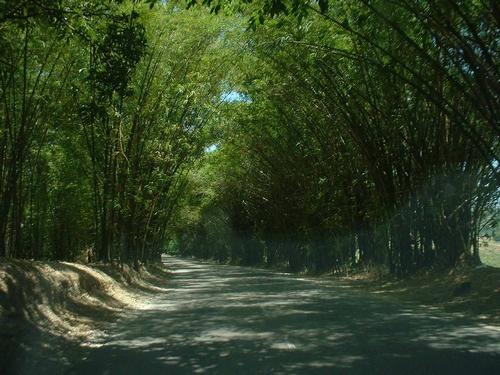 Bamboo is found all over the island and rhododendron, honeysuckle, lilies and the merianas or Jamaican rose grow on the Blue Mountains. Strychnine and medicines are extracted from the strychnas, a type of nightshade. Common tree species are almond, cedar, pine, allspice, tamarind, trumpet, breadfruit and tulip trees. Common flowers and plants include bougainvillea, conifers, flamboyant, gale, medlar, disc cactus, anthurium, heliconia, and silk plant. Bladderwort is an insectivorous plant. Mangrove forests are still found on the west coast and are protected.

The bird world is most varied in Jamaica. There are about 250 species, about half of which remain permanently on the island and the rest come to overwinter or breed. About 24 species are endemic, so only occur in Jamaica. 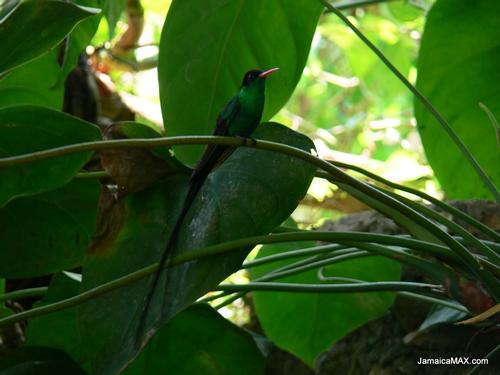 Doctor Bird JamaicaPhoto: Alfred Moya (CC BY 2.0) no changes made

Jamaica has three species of hummingbirds and a subspecies, of which the pennant-tailed hummingbird (Doctor Bird) is the national bird and the dwarf hummingbird is the second smallest bird in the world. Other bird species include the native Jamaican toddy, screech owl, brown owl, turkey vultures, parrots and the Jamaican pigeon. Following is a random list from the motley Jamaican bird world: ducks, frigate birds, buntings, gannets, cuckoos, crows, spoonbills, gulls, pelicans, pluckers, snips, mock thrushes, sugar thieves, troop or kling-klings, falcons and swallows and many others. The largest population of whistling ducks in the world is found in Jamaica. These whistling ducks are so special because they cannot croak.

The beaked muzzle crocodile is Jamaica's largest reptile. Rare are iguanas and the Jamican stump-tail rat. There are 116 species of butterflies in Jamaica, some with a wingspan of up to 15 cm (giant swallowtail). Also special are 50 types of fireflies and one type of luminous clipping beetle. Countless are the moth species, 21 of which are endemic Canaan rose. Strychnine and medicines are extracted from the strychnas, a type of nightshade. Common tree species are almond, cedar, pine, allspice, tamarind, trumpet, breadfruit and tulip trees. Common flowers and plants include bougainvillea, conifers, flamboyant, gale, medlar, disc cactus, anthurium, heliconia, and silk plant. Bladderwort is an insectivorous plant. Mangrove forests are still found on the west coast and are protected.

Furthermore, the fauna of Jamaica has three types of turtles, five types of non-poisonous snakes (including the yellow snake, a constrictor species), seventeen frog species, one type of giant toad and spiders. It is unique that the fourteen native frog species do not come into the world as tadpoles, but immediately crawl out of their eggs as frogs. Mongooses were imported in the 19th century to control the rats. However, they also slaughtered the bird and snake population in particular. For example, the black snake has died out in Jamaica due to the mongoose. We have now managed to keep the number of mongooses under control.

A rare rodent is the underground Jamaican hutia. About 25 species of bats are found in Jamaica. The Jamaican iguana, considered extinct, was found to be alive in the Hellshire Hills. This lizard species can grow up to 1.5 meters long. The 23 other lizard species are not that big, but they are found all over the island. 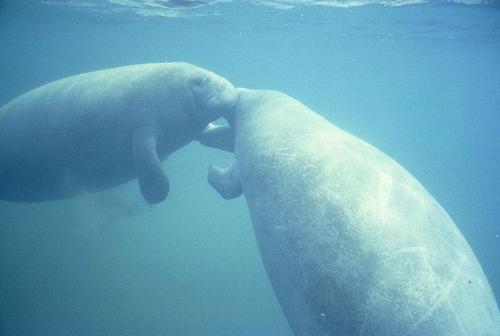 The most special animal of Jamaica is the West Indian manatee, a type of manatee, which mainly resides on the south coast of the island. A selection from the marine fauna: barracudas, surgeonfish, angel fish, grunt fish, wrasse, parrotfish, rays, pike, tuna, hammerhead shark, tiger shark and spiny dogfish.

Some common corals in the waters around Jamaica include red coral, fire coral, stony coral, and bark coral. Near Montego Bay is the Montego Bay Marine Park, Jamaica's first national underwater park, of which about half remain permanently on the island and the rest come to overwinter or breed. About 24 species are endemic, so only occur in Jamaica.