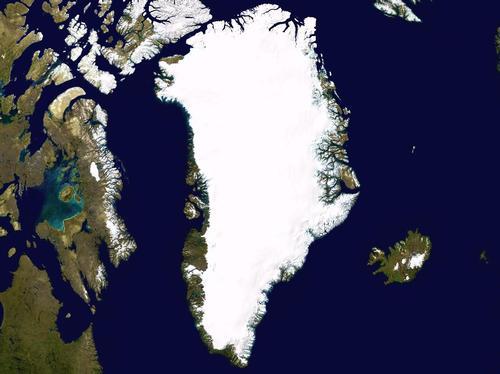 Approximately 2 million km2 (about 82%) of Greenland is covered by a pack of land ice averaging 1,600 metres thick, and there are even stretches that are over 3,000 metres thick. The surface of this vast expanse of ice is as large as the surface of Germany, France, Italy and Spain combined. Only a tundra area in the north (Pearyland) and a 250 km wide coastal strip are ice-free. Due to the weight of the ice, the bottom of the interior has sunk to 360 metres below sea level in some places.

The coast is characterised by steep mountains of which the Gunnbjørn Fjeld is the highest (3700 metres) and by the many fjords that reach 300 km inland (the Scoresbysund). Because of these fjords, Greenland's coastline is almost 40,000 km long! Off the coast are many islands of which Disko, which lies west of Greenland, is the largest with approx. 8600 km2. 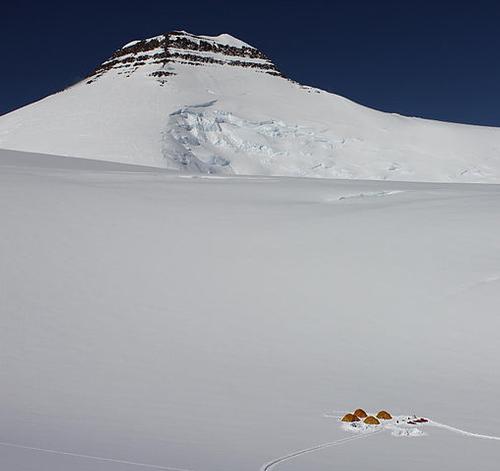 The land ice on Greenland is divided into a north and south cap and can be seen as a kind of glacier. The inner ice of the ice sheet is called firn ice. The firn ice is formed by melting and freezing snow. At the edge of the land ice, there are glacier tongues that descend into the sea. The speed at which this happens depends on the temperature, the soil and the pressure of the firn ice. Near Ilulissat is the fastest glacier, which slides about 30 metres a day into the sea over a width of about eight kilometres. The chunks of ice that slide into the sea become the infamous icebergs. One of them became fatal to the Titanic. These icebergs can protrude 100 metres above the water. The largest part of the iceberg is under water, 6/10 to 9/10 part. Due to the freezing of the sea level, in the north and north-east the sea ice is formed, also called pack ice when it is solid and immobile on all sides. So far, no ship has succeeded in sailing all the way around Greenland.

In 2009, it became known that the Ilulissat had shrunk more than 15 kilometres since 2001. In 2008, 30 cubic kilometres of ice disappeared from the glacier. The Ilulissat has been on UNESCO's World Heritage List since 2004.