Parliament is seated in Chritiansborg SlotPhoto: Julian Herzog CC 4.0 International no changes made

Denmark has been a kingdom since Viking times. The Kingdom of Denmark has been a parliamentary democracy since 1849. This limits the power of the head of state (king or queen). Executive power is in the hands of Parliament and the Council of Ministers (Statsraadet). Denmark has had a one-chamber legislature, the Folketing, with 179 directly elected members since 1953. Of these, 135 members are elected from 23 constituencies. 40 seats have been reserved for candidates from small parties who have not passed the electoral threshold. Furthermore, Greenland and the Faroe Islands each have two deputies. All Danish and men and women have the right to vote and stand as a candidate from the age of 18. There is no compulsory attendance. Because parties that remain below the electoral threshold can also enter parliament, Denmark has a very large number of political parties.

Denmark is divided into 14 provinces (amtskommuner) which in turn are divided into 275 municipalities. Copenhagen is a separate administrative unit.

Denmark has been a member of the European Union since 1973. For the current political situation, see chapter history. 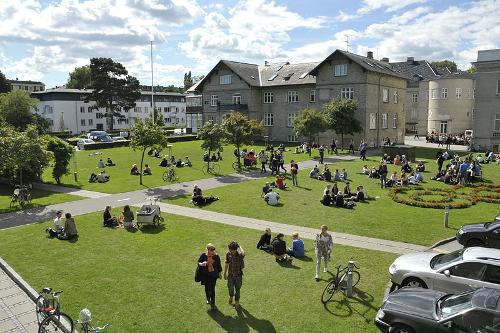 Denmark was the first country in the world to have an education law (19th century). Immediately afterwards, folk high schools (folkehøjskoler) were founded for adult education. Particularly in the countryside, good work was done among the peasantry. The very first folk high school dates back to 1844. Spread across the island there are about eighty. Regular education is also well and modernly organized in Denmark. For example, parents have a fairly large say in educational issues and the teaching of a classroom event increasingly focused on the individual development of the student. Compulsory education lasts from seven to sixteen years. Since 1970 there have been preparatory classes designed to prepare for primary school. There are municipal schools, private schools and home schools in the remote areas. After primary school, students can follow vocational or academic training. Eighty percent of the students do this too. Denmark has five universities, of which the University of Copenhagen is the oldest (1479). The other universities are located in Aarhus, Aalborg, Odense and Roskilde. Higher education is attended by roughly as many boys as girls.