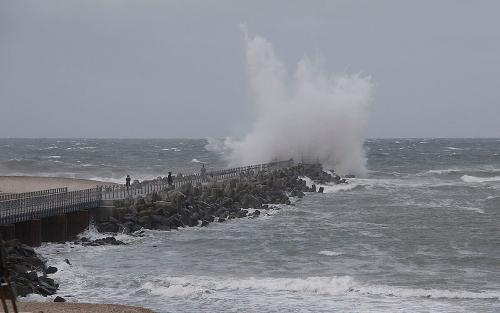 Denmark has a moderate maritime climate, strongly influenced by the temperature of the North Sea water. The weather type can vary from day to day, but due to the small surface of the country and because it is surrounded by the sea on almost all sides, the climate differences are very small. In the coldest month, February, the average temperature fluctuates around 0 °C. In severe winters, part of the Kattegat freezes over for a short time. Ice is more common in the Sound and in the Belts; in the Sound on average every two years.

Summers are characterized by a lot of sunshine. In July, the hottest month, the temperature fluctuates on average between 15 and 16.5 °C. The warmest regions are Bornholm, Falster, Lolland and Viborg. The coldest regions are Himmerland, Midtfyn and Nordvestjyland.

On average, the Danish land receives 600 mm of rainfall per year. Between the North Sea coast and the hills of Midtjyland an average of 700 mm falls. Less than 600 mm falls on Bornholm, Sjælland and on the coast of the Kattegat. The number of rainy days is between 120 and 200 days per year. Most rain falls from August to October.

The driest period is between the end of April and the beginning of June. When the wind blows from the east in winter, it can get very cold, down to -31 °C. In summer, the temperature can rise to more than 35 °C due to the same easterly wind. However, the wind often blows from the west. Due to the many depressions, it storms on the west coast more than 50 times a year.