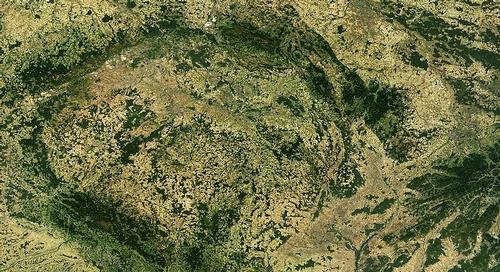 The country has no sea borders, the nearest seas are the Baltic Sea in the north and the Adriatic Sea in the south, both more than 300 km away. The Czech Republic is bordered to the northeast by Poland (658 km), to the east by Slovakia (215 km), to the south by Austria (362 km) and to the west and northwest by Germany (646 km).

In many places, there is volcanic activity in the form of hot springs. Around these places, the famous spas and bathing resorts have arisen..

The Czech Republic has very different landscape forms in terms of both age and shape. The landscape is characterised by a succession of basin-like lowlands separated by mountains. These landscapes can be divided into three main groups.

The basins and mountains of the Bohemian massif: This massif is a folded area enclosing the Bohemian lowlands in a wide arc. In the north, it includes the Sudetengebirge Mountains with the highest peak Schneekoppe or Snežka (1603 m) on the border with Poland. The Krkonoše Mountains are also a national park and mainly covered with coniferous trees. The source of the Elbe River (Labe) is also found in the Giant Mountains. 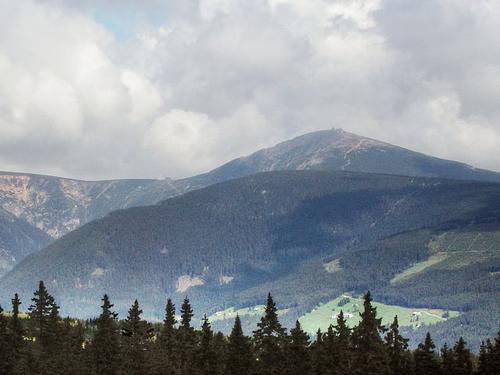 To the west of these lie the Ore Mountains or Krušné hory (highest peak Klínovec, 1603 metres), which mark the north-western and northern borders with Germany and are rich in minerals, including lignite. At its foot lie the volcanic Duppau Mountains (Doupovské hory) with many mineral springs, which gave rise to the Czech spas. Towards the southeast lies the Fichtelgebirge and the Bohemian Forest, on average about 1150 metres high with the highest peak at 1330 metres, the Javor.

The Bohemian Lowlands: In the south, consist of the low massif of South Bohemia and the Luschnitzer basin, among others. The Bohemian Lowlands are crossed by a number of rivers, the best known of which is the Vltava. To the north-west of this lie the hilly landscapes of the Brda Forest (up to 850 metres high) and the hilly landscapes of north-west Bohemia. In the east, Bohemia is separated from Moravia by the Moravian heights (up to 660 metres high).

At the foot of Jizerské hory lies the Bohemian Paradise (Cesky raj), a nature reserve with jagged sandstone rocks. Near Prague is the Czech Karst (Cesky kras), an area known for its stalactite caves.

The Silesian-Moravian corridor: This is a slightly hilly area between the Bohemian and Moravian parts consisting of sediments and volcanic rocks.

Moravia is generally relatively flat with low mountains and hills of the Bohemian-Moravian Highlands in the west.

The basins and mountains of the younger folding mountain range in Moravia, part of the western Carpathians.

The landscapes of Moravia coincide with the White and Lesser Carpathians.

The River Morava runs from the north to the south and empties into the Danube. The river has created a wide valley.

The Bohemian-Moravian heights, the Jeseníky Mountains and the Carpathians form a natural watershed between the basins of rivers whose course is directed towards the North and Baltic Seas on the one hand and towards the Black Sea on the other. The Labe (Elbe), Vltava (Vltava), Sázava, Orlice, Jizera, Otava, Berounka and Ohre (Eger) drain water from the Bohemian Basin into the North Sea.

The waters of the Lužická Nisa (Neisse) and the Odra (Oder) flow into the Baltic Sea. The Morava (March), Dyje, Svratka and Jihlava rivers flow into the Danube, which flows to the Black Sea.

The Czech Republic does not have many natural lakes; they are mainly mountain lakes (Šumava) pushed up by moraines. The largest artificial lake is Rožmberk Lake, created in 1590 and measuring approximately 500 ha.

The numerous, mostly medieval small reservoirs called rybník are mainly located in South Bohemia and cover a total area of 415 km2. There are many modern reservoirs, mainly in the Vltava River, and the largest reservoir is Lipno Lake.