The Austrian capital Vienna is only 60 kilometres from the Slovak capital Bratislava. Slovakia does not border on a sea. The nearest seas are the Baltic Sea in the north and the Adriatic Sea in the south, both more than 300 kilometres away.

The landscape of Slovakia, which is actually enclosed by an elongated arc of the Carpathians, has a very complex structure. Like the Alps, the Carpathians form a complicated cover landscape, but the articulation is completely different and, due to repeated fault movements, the original mountain range has lost its cohesion and been broken up into a large number of smaller mountains with basin landscapes in between.

The High Tatras are characterised by steep walls and sharp peaks, the highest of which, Gerlachovský štit, is 2655 metres high.

The Low Tatras (Nizké Tatry) are located in Central Slovakia and the highest peak is the Dumbier, 2045 metres high. 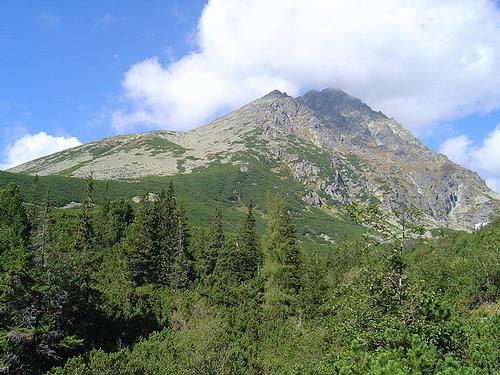 West of the Small Carpathians are two more small mountains. The Vel'ká Fatra and the Malá Fatra. In the south and south-east, on the border with Hungary, there is a limestone area with many stalactite caves, the Slovak Karst (Slovenský kras). Approximately in the same area is the so-called Slovak Paradise (Slovenský raj), with many caves, waterfalls and limestone rocks.

On the border with Poland is the Pieniny Mountains, a real water sports area, e.g. on the river Dunajec.

In the east of Slovakia, close to the Ukrainian border, are the Vihorlat Mountains, which consist of volcanic rocks.

Approximately 40% of the total area in Slovakia is covered with forest and only 20% of the land is cultivated.

Along the southern border, the Danube flows to the Black Sea, forming the border with Hungary for about 150 km. The capital Bratislava is located on the Danube. From Slovakia, this river collects the water from the Nitra, Hron, Ipel, Slaná (Hungarian: Sajo), Hornád, Bodrog, Ondava, Laborec, Latorica and the Váh (Waag), the largest river in Slovakia, which has its origin in the Tatra mountains.

Slovakia has few natural lakes; they are mainly candle lakes and morainic lakes in the Tatra Mountains. The High Tatras have about 100 lakes, the Low Tatras about 20. In both cases, they do not exceed 3 km2 . There are also many modern reservoirs, mainly in Váh.

The largest lakes in the Slovak part of the Tatra Mountains are:

Most caves are found in the Slovak Karst and east of the Low Tatras. The Slovak Karst lies on the border of Slovakia and Hungary and there are many stalactite caves to be found.

The highest waterfalls in the High Tatras are the: