Poland (officially: Rzeczpospolita Polska = Polish republic) is a republic in Eastern Europe. The total area of Poland is 312,684 km2. Poland measures about 650 kilometers from north to south and about 700 kilometers from east to west. 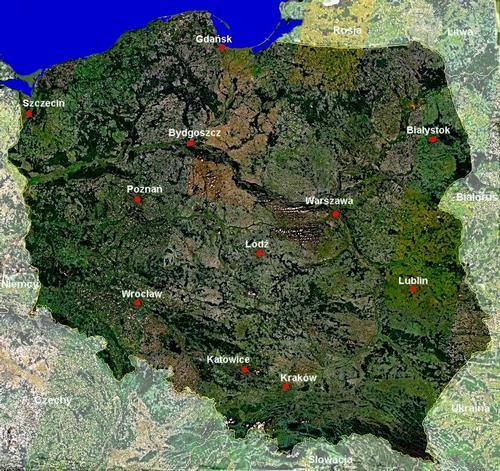 Poland borders seven countries: in the west on Germany (456 km), in the east on the Russian enclave Kaliningrad Oblast (206 km), Lithuania (91 km), Belarus or Belarus (407 km) and the Ukraine (526 km), in the south to Czechia (658 km) and Slovakia (444 km). In the north, Poland borders the Baltic Sea and the coastline has a total length of 491 kilometers. The border with Germany is largely determined by the Oder and the Neisse.

In the extreme northwest corner of Poland lies the island of Wolin, where the Wolinski National Park is located, a true bird paradise. The peninsulas of Hel and Mierzeja Wislana can also be found here.

Poland is generally a flat country; 54% of the total area is below 150 meters, 37% has a height between 150 and 300 meters. Mountains only occur on the southern border. In terms of relief, Poland can be divided into three roughly east-west running belts:

Along the Baltic Sea lie the coastal plain and in the low plain of the Vistula lies the lowest point of the country:-1,8 meters. The slightly higher (up to more than 300 m) Pomeranian and Masurian Lake Plains connect to this low plain. The coastal strip consists of wide sandy beaches, substantial dune ridges and a few large dune lakes. The somewhat lower central plains and the primeval current valleys consisting of the Silesian Basin, the Kujawy, the Great Polish Meervlakte, the lowlands of Mazowsze and Podlachia.

South of the central plains are a number of high plateaus. Of these, the Kleinpolse Plateau is articulated in Poland's oldest ridge, the Góry Swietokrzyskie (Holy Cross Mountains, up to 611 m high), the plateaus of Silesia and Kraków-Czestochowa and the synclinal of the Nida. The Lublin Plateau lies between Wisla and Bug and is 220-300 meters high.

The Carpathians consist of low mountain ranges and high altitudes of alpine origin, intersected by the upper reaches of the Odra and the Vistula. Apart from Bieszcady (Forest Carpathians), the Polish Carpathians are part of the Western Carpathians. The highest point in Poland (Rysy, 2499 m) is located in the Tatra massif. 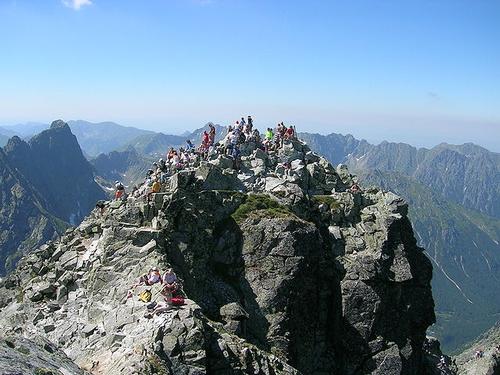 People at the top of the Rysy, highest mountain in Poland Photo: Public domain

The northernmost range is the chalky Pieniny. Further west, separated from the Carpathians by the Moravian Gate, are the Sudetes, a granite massif. The highest part of this is the Giant Mountains or Karkonosze.

Approx. 53% of the Polish soil consists of podzol soils. This type of soils is characterized by a dark top layer with a lot of humus, under which there is a leached layer, which is followed by a bottom layer in which minerals and organic matter accumulate through washing.

More than 9000 lakes cover about 1% of the surface of Poland. The largest are Sniardwy Lake (109 km2) and Mamry Lake (102 km2), both located in Mazoeri . Most of the lakes are located in the Pomeranian, Masurian and Great Pole Lake Plains, as well as in the Kujawy.