Krakow (Krakau) is the second largest and one of the oldest cities of Poland. The history of the city dates back to the 7th century. Krakow is located on the Wisla river in the region of Lesser Poland. Krakow has traditionally been one of the most important centers of Polish educational, cultural and artistic life and is one of the most important economic centers in Poland. Krakow's name is traditionally derived from Krakus, the legendary founder of Krakow and ruler of the Polish tribe of the Lechitians. 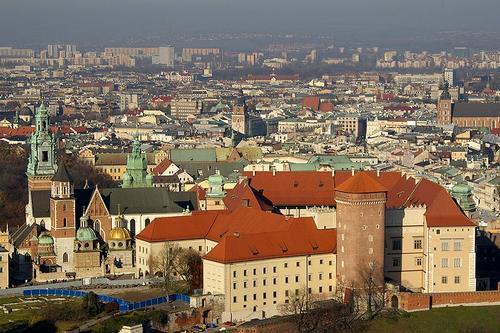 According to the 2010 census, the city has a population of 726,265, and the entire metropolitan area has a population of 1,449,783. In 1978, the historic center of Krakow was added to the UNESCO World Heritage List. That same year, Karol Wojtyla, Archbishop of Krakow was elected as the first Slavic Pope and the first non-Italian Pope in 455 years. His name became Pope John Paul II.

The coordinates of Krakow are: 50°3'41' North latitude and 19°56'18' East longitude. Krakow is located in a valley at the foot of the Carpathians in the southern part of Poland, 219 meters above sea level. Krakow is 100 km away from the Tatra Mountains. This mountain range extends to the south and forms the natural border with Slovakia and Czech Republic. The city is located 230 km west of the Ukraine border. The metropolitan area covers 327 square km. There are five nature reserves with an area of approximately 120 hectares in the western part of the city that are under legal protection. The area is rich in plants and wildlife and has unique features. The part of the city on the valley of the Vistula River is protected as an ecological area within the European ecological corridor. The city center is on the left (north) bank of the river. 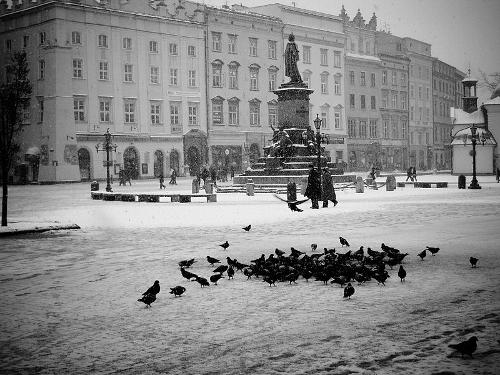 Krakow Pigeons on the Square in the winter Photo: Michal Osmenda CC 2.0 Generic no changes made

Remains of a Stone Age settlement have been found at the site of Wawel Hill. Legend has it that Krakow was founded by the mythical ruler Krakus. The city was first mentioned in a document from 966.

The city was almost completely destroyed during the Mongol invasion of 1241. Shortly afterwards the city was rebuilt and in 1257 Krakow was granted city rights with tax benefits and trade privileges for its citizens. In 1259 the city was again destroyed by the Mongols. After that attack, forts were built around the city to prevent another attack. The city developed into an educational center in 1364, when Casimir III of Poland founded the University of Krakow. 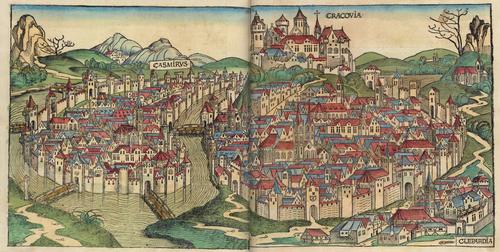 In 1809, under Napoleon Bonaparte, the city was part of the Duchy of Warsaw. After the defeat of Napoleon in Russia and the Congress of Vienna in 1815, the partially independent Free City of Krakow was born. After the Austro-Prussian War in 1866, Krakow became a Polish national symbol and a center of culture and art. During the Second Polish Republic, Krakow restored its role as an important educational and cultural center.

After the invasion of Poland in September 1939, Nazi German forces made Krakow the capital of the central government, led by Hans Frank with the headquarters in Wawel Castle. More than 180 professors and academics were arrested in a raid and sent to the Sachsenhausen and Dachau concentration camps. The city's Jewish population was moved to a walled area that became known as the Krakow Ghetto. From here they were deported to extermination camps such as Auschwitz and Plaszow.

Krakow emerged from World War II relatively unscathed. After the war, the intellectual and academic community of Krakow was placed under total political control during the Stalinist regime. Since the fall of communism in 1991, the city has entered a period of strong growth.

Krakow is a must for tourists visiting Poland and has numerous world-class monuments, charming vistas, a lovely atmosphere and excellent restaurants. You will find amazing historical monuments, the entire old town is under UNESCO's World Heritage protection. There are beautiful old squares, buildings and churches that symbolize the culture and architecture of the country. You can take a beautiful walk through the old town create.

On Wawel Hill (228 meters above sea level) is the Royal Castle, once the residence of the kings of Poland. There you will find the famous Wawel cathedral and other monuments. The Diocese of Krakow was founded in the year 1000, when the cathedral was built. The first pre-Romanesque brick buildings were built in the 11th century. A Gothic cathedral was built in 1364. During the Jagiello dynasty, Wawel was transformed into a renaissance palace. The royal chapel was added to the cathedral in the 16th century, an artistic masterpiece and a fine example of Polish Renaissance art. Wawel Hill is today an important national monument and an excellent witness to the history of Poland with several museums and monuments. 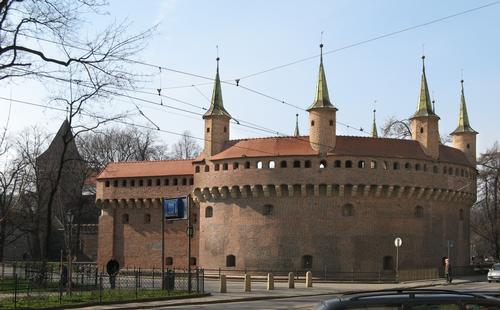 Barbakan is a Gothic building with seven turrets, built in the 15th century. In the past it was surrounded by a 24 meter wide moat and this fortress played an important role in the defense of Krakow. This monument is the best preserved building of its kind in Europe. Today, it hosts concerts and various exhibitions.

Founded in the 13th century, the Basilica of the Holy Trinity is located in Stolarska Street and is linked to the Dominican Monastery. The interior houses a number of Gothic and Baroque chapels. 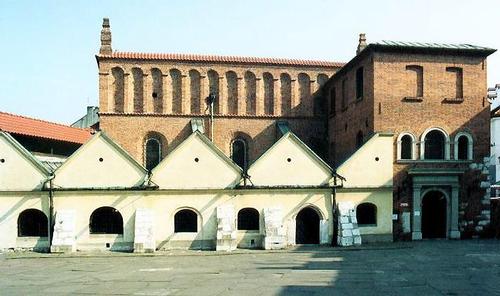 There are 90 synagogues in Krakow, but only two are still used for Jewish worship. The buildings were built in different styles, there are synagogues in Gothic, Baroque and Modern styles. The Old Synagogue was built in the 15th century. Until 1939 this synagogue was the religious center of the Jewish population. It is a very important monument in Hebrew culture.

The most visited museums in Krakow are:The Polish Aviation Museum, the history museum, the national museum, the Wawel Royal castle, the Czartoryski museum, the Jewish museum and Auschwitz-Birkenau (40 km from Krakow). 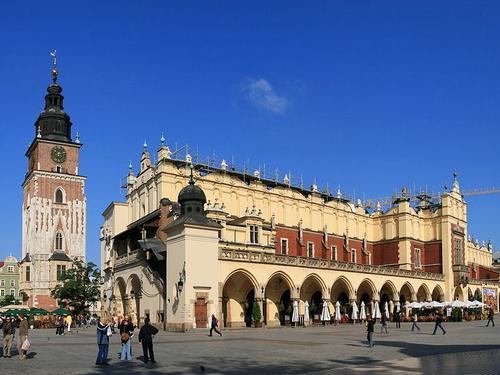 Town Hall on the Marke square in KrakowPhoto: Jan Mehlich CC 3.0 Unported no changes made

The Grote Markt is the largest square in Krakow and dates back to the 13th century. In the Middle Ages this was the largest city square in Europe. Today the market square is one of the three largest in Europe. Each side is 200 meters long. Some of Krakow's most interesting buildings are located on this square or in the surrounding area. Two tall towers are located in the square. The Sukiennice is a famous building located on the main square. Originally built in the 13th century and transformed over the centuries. Today it houses 19th century Polish paintings and sculptures and is part of the National Museum. The Slowacki Theater is one of the most beautiful Baroque theaters in Europe. The gate of St. Florian is a medieval watchtower. The gate was established in the 13th and 14th centuries and was part of the fortifications that protected the city from invaders. The Florian and Barbican gates are the only remains of the medieval defensive walls. The square also houses the town hall and the Basilica of the Virgin Mary. 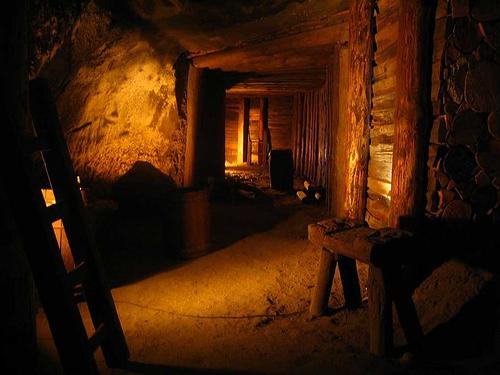 The Wielicska salt mine is one of the oldest salt mines in the world. The extraction dates back to the 11th century. There is a tunnel system of about 300 kilometers and the mine is a World Heritage Site. It is a tourist attraction that has also attracted famous visitors in the past, such as Copernicus and Goethe. 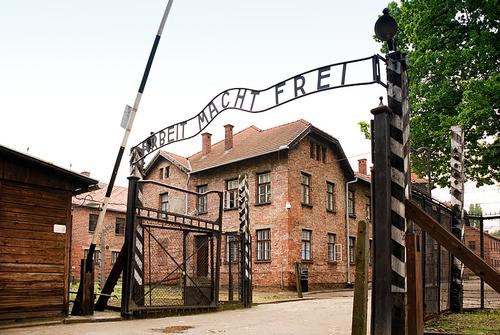 While in Krakow you can also visit the extermination and concentration camps of Auschwitz-Berkenau. The horrors of the Second World War come to life here. This camp is the symbol of the Holocaust. Auschwitz is located about 60 kilometers from Krakow and is known for the gas chambers and the horrible medical experiments that were carried out during the Nazi regime.