In fact, it is the largest country lying entirely in the continent of Europe, as Russia lies largely in Asia. Ukraine is the second largest republic from the former Soviet Union after Russia and Kazakhstan.

In addition, Ukraine is also bordered to the south by the Sea of Azov and the Black Sea, totaling 2782 km of coastline. These two seas also provide Ukraine's connection to the world's oceans.

The Black Sea is connected in the north by the Kerch Strait, in the southwest by the Bosporus, the Sea of Marmara and the Dardanelles with the Mediterranean Sea.

The republic consists largely of plains, in which the rivers are carved out. Lower than 200 meters are the flat Polesje in the north, the lowlands in the south and the slightly undulating lowlands north of the middle course of the Dnieper.

Elevations of 200 to 500 meters reach the Volhynian-Podolian Plateau in the west, the Dnieper Plateau in the middle, and the Azov and Donets Plateaus in the southeast.

The only mountains are found in the south on the Crimean Peninsula with the Roma-Kosh (1541 m) and in the west the Carpathians with the highest peak in the country, the Goverla (2061 m). 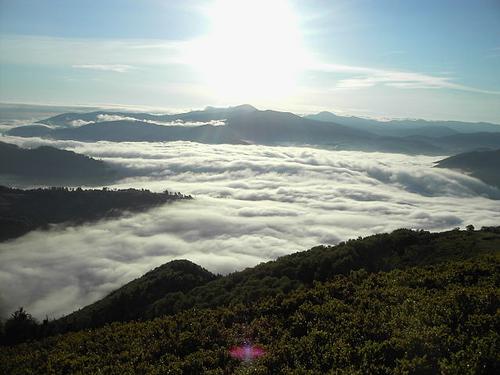 Top of the Goverla, UkrainePhoto: Ustas CC 3.0 Unported no changes made

Ukraine has about five landscapes:

The mixed forest belt north of the Loetsk-Rovno-Zjitomir-Kyiv-Konotop line, with a large swamp area, the Pripet, due to high groundwater levels and poor drainage.

South of this is the forest steppe, and south from the line Balta-Kirivograd-Charkov to the coasts of the Black Sea and the Sea of Azov stretches a huge steppe area. A large part of this area is occupied by the famous black chernosem soils (more than 50% of the total land area), one of the most fertile (loess) soils in the world. Ukraine is home to more than a quarter of the world's total supply of chernosem soils. The Carpathians is an arc-shaped chain mountain range in central Europe that runs through the southwestern corner of Ukraine. The Carpathians form the watershed between the Baltic and Black Seas and consist of several parts: the Western Carpathians, the Pre-Carpathians, the Transylvanian Alps and the Forest Carpathians or Eastern Beskids, where the highest mountain of Ukraine, the Goverla, is located. The Carpathians are very forested: at the base one finds oaks, in the middle a belt of beeches and a little higher spruces. The tree line is at 1500 meters, in the south at 1800-1900 meters.

Crimea is a peninsula on the north coast of the Black Sea. Four areas can be distinguished: the steppes, the Kerch isthmus (together 75% of the area), the Crimean mountains and the coastal plain.

The steppes are an extension of the southern Ukrainian steppes. Here there are about 400 magnesium-containing salt lakes. The isthmus of Kerch consists of a number of hills and ridges.

The coastal strip of the north shows many elongated coves, so-called rias. South of the Sevastopol-Feodosia line extends the Crimean mountains, of which the Jajla Mountains are the most important chain.

The more than one hundred streams flowing to the west and north all dead-end in the steppe area. The 1.5 to 9.5 km wide coastal strip in the extreme south has a park landscape with subtropical flora.

Djepr near KyivPhoto: Dmitry A Mottl CC 3.0 Unported no changes made

The widely branched river network consists of major rivers such as the Dnieper, Danube, Dnestr, Southern Bug, Northern Donets and Bug, all mainly rain and snow rivers. Only the Southern Bug is entirely within Ukrainian territory.

There are about 73,000 rivers and more than 3,000 lakes. Most of the rivers flow into the Black Sea and the Sea of Azov, the rest flow into the Baltic Sea.

The Black Sea coast consists of many bays and estuaries, while the coast along Crimea is mostly rocky. The coast on the Sea of Azov, like that on the Black Sea, is mostly low, with sandy areas here and there.