Costa Rica (officially: República de Costa Rica) is a republic in Central America. The total area of the country is 51,100 km2, making Costa Rica the third smallest country on the American mainland. In some places, Costa Rica is less than 145 km wide and only 290 km long. 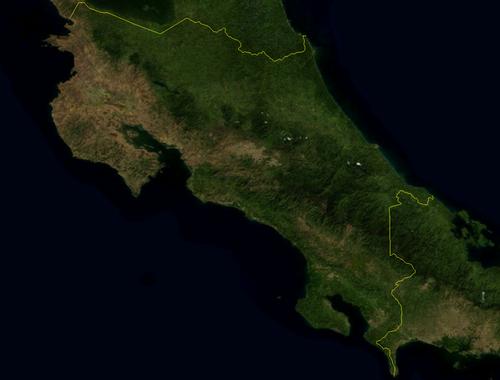 Some islands that belong to Costa Rica are Isla Chira (43 km2) in the Gulf of Nicoya, Isla Tortuga, Isla del Caño, Isla San Lucas and Isla Cabo Blanco. The Costa Rican territory also includes the uninhabited Isla del Coco (22 km2), which is located 532 km from the mainland in the Pacific Ocean.

The government of Costa Rica has legally designated approximately 11% of the land area as a nature reserve. These "parques nationales" and "reservas biológicas" are easily accessible and all ecosystems are represented here.

Parallel to the Cordillera Talamanca runs the coastal mountain range called Fila Costeña and in between lies the Valle Central. To the north of all these mountain ranges is a river-intersected lowland plain or "llanura". The rivers flow into the Río San Juan.

The coastal area along the Pacific is hilly, with small coastal plains, bays and peninsulas here and there. 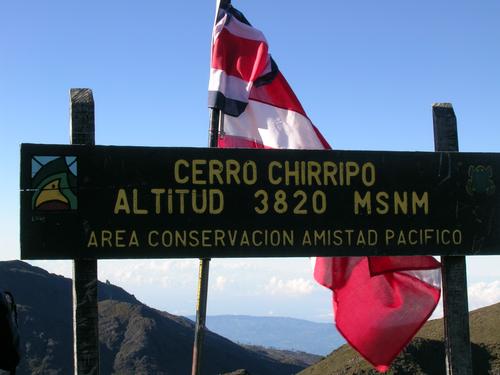 The mountain ranges are between 1500 and 4000 meters high, and the most impressive is the Cordillera Talamanca. Here is also the highest mountain in Costa Rica, the Cerro Chirripó with 3820 meters. To the east and west, the cordilleras slowly turn into tropical plains. The coastal strip in the east, the Caribbean Sea side, is very varied and consists of mangrove forest (including red mangrove and black, white, tea, and button mangrove), swamps, lagoons, rainforest and palm beaches. The jagged coastline in the west, the Pacific side, looks very different with savannah landscapes, forests, tropical rainforest and dark volcanic sand beaches.

Costa Rica has about 40 large and very many small rivers, which are often connected by channels in the Caribbean coastal plain. The province of Guanacaste is very rich in water, with many rivers that originate in the cordilleras and flow into the Gulf of Nicoya or the Río Tempisque. The Río Térraba, or the Río Grande de Térraba, is Costa Rica's longest river. It flows 195 km west to eventually flow into the Pacific Ocean. The second longest river is the Río Tempisque with 158 km in the province of Guanacaste. The Río San Juan is 135 km long and the Río Pacuare 133.5 km; they both flow into the Caribbean Sea. 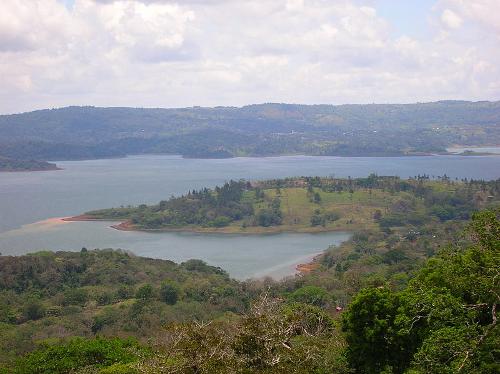 The largest lake in Costa Rica is the Laguna de Arenal with an area of approximately 75 km2 and located at an altitude of approximately 550 meters. It used to be a small mountain lake, but the construction of a dam in the river Arenal created the current reservoir.

The swamps of Costa Rica can be divided into forest and palm swamps. The palm swamps consist of only one type of palm: the water palm or "yolilla".

The Parque Nacional Barra Honda is intersected by limestone cliffs. Over millions of years, the rain has created underground rivers, chambers and vaulted ceilings with spectacular stalactites and stalagmites.

Costa Rica has more than 30 nature reserves, and many have existed for decades. More than a fifth of its area has designated the country as a protected natural area - as a national park or biosphere reserve, as an Indian territory or as a region on the UNESCO World Heritage List.

As a result, Costa Rica has been discovered by ecotourism and is a great attraction for biologists. 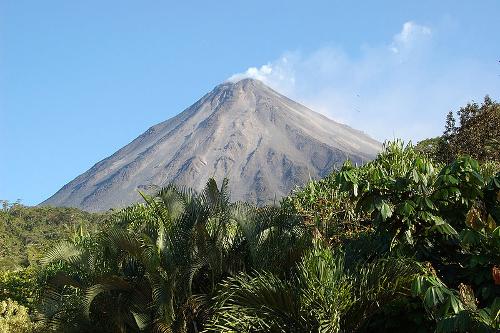 The mountainous country in the north of Costa Rica is volcanic. The volcanoes that lie here are part of a whole series of volcanoes that extends from northern California to southern Chile.

Costa Rica mainly has stratovolcanoes with their well-known cone shape. The only volcano that still makes itself heard regularly is the 1,633 meter high Arenal, which spews out a cloud of glowing ash and grit several times a day under loud rumble. During periods of high activity, the frequency can be up to three eruptions per hour, weeks in a row. The Rincón de la Vieja (1,895 m), Poás (2704 m; Costa Rica's largest crater: 1.5 km in diameter and 300 m deep), Irazú (3,432 m, 488 m in diameter and 300 m deep) and Turrialba are dormant volcanoes with lava lakes, vapor sources and gas sources.

The former volcano is an amalgamation of several volcanoes. Nine craters have been identified on the mountain. Only one crater of these is still active.

Costa Rica is also located in a narrow area where very strong earthquakes occur, the so-called Pacific belt. Almost every year the country suffers from one or more small earthquakes.

The last major earthquake was on April 22, 1991 with a magnitude of 7.4 on the Richter scale near Limón on the Caribbean coast. The earthquake was followed by a gigantic tidal wave; dozens of people died and the infrastructure was badly damaged.