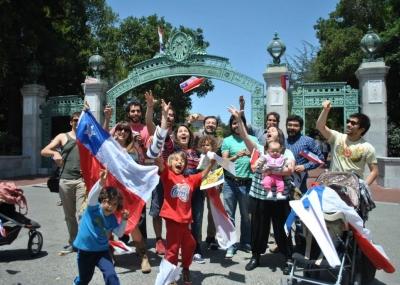 Distribution of the population In recent decades, urbanization has accelerated, causing the inhabitants of Chile to be very unevenly distributed across the country. The majority of the population lives in the Central Valley with Greater Santiago at its center. Santiago had 1.5 million inhabitants in 1952, but in 2016 it had more than 6.5 million inhabitants. Other urban centers are Concepció Viña del Mar, Valparaíso and Temuco. About 90% of the total population lives in the big cities.

The large slums on the outskirts of the big cities are called "poblaciones marginales" or "callampas" (mushrooms). As a result of the continuing migration to the cities, only about 10% of the population lives in rural areas.

It is estimated that from 1973 to the late 1980s, one million Chileans left the country for political or economic reasons.

The Chilean population is a mix of different population groups. Approx. 65% of the current population are "mestizos", descendants of Spanish settlers and Native American women. The Spaniards came mainly from the Spanish provinces of Andalusia, Estremadura, Castile, Leon and the Basque Country.

Approx. 10% of the total population consists of indigenous peoples or "pueblos indigenas". Due to the many mixed marriages, there are not many pure Indian races left.

Approx. 25% of the population consists of whites, who have emigrated to Chile from France, Yugoslavia, Italy, Switzerland, England, the Netherlands and especially from Germany since the end of the 19th century. For example, Valdivia is almost a "German" city, with even a German newspaper.

Because Chile did not have large-scale plantations in colonial times, the number of blacks imported from Africa as slaves remained very small. The few slaves gradually became completely absorbed by the rest of the population, so that Chile does not have a black culture. 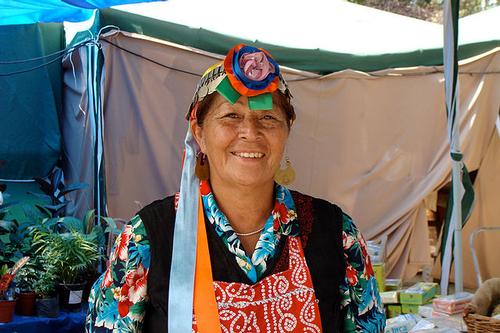 Of the original Indian population, only the Araucan peoples successfully resisted Spanish colonization. It was not until 1883 that the army managed to conquer the territory of this indigenous population, consisting mainly of Mapuche Indians.

There are still more than 3,000 Mapuche communities in the south of the country, accounting for 9% of the total population. They mainly live in small, traditional communities around the city of Temuco. In total there are approximately 1 million Mapuches. The Mapuches ("people of the earth") live mainly in the southern regions of Araucanía, Los Lagos, and in some neighboring Argentine provinces.

The two other indigenous peoples who have managed to preserve their own culture are the Aymaras and the Atacameños from the deserts and high plains of the "Great North." The Easter Islanders are still a small minority on their island.

The approximately 20,000 Aymara Indians are part of the Highland Indians of Chile, Peru and Bolivia. They lead a nomadic life and live alternately at high altitudes in summer and in the valleys in summer. They live by trading products from llamas, alpacas and sheep. In the valleys they grow maize, beans, barley, quiñoa and fruit.

The Atacameños also live in the "Great North" with San Pedro de Atacama as the center. They keep llamas and alpacas and do some arable farming. Although there are no longer purebred Atacameños, according to scientists, several thousand people are still classified as belonging to the Atacamian race. Many of them live in large cities such as Antofagasta and Calama. The Atacameños have also recently been recognized by the government as an "indigenous people".