Chile (officially: República de Chile) is a republic in South America, sandwiched between the Andes Mountains to the east and the Pacific Ocean to the west. The total area of Chile is 756,626 km2. Chile is the fourth largest country in South America after Brazil, Argentina and Peru. 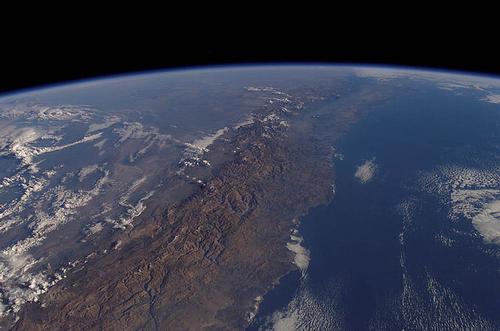 Skyline Santiago with mountain peaks of the Andes behind itPhoto: Victorddt CC 4.0 International no changes made

Two large islands in the Pacific belong to the territory of Chile: the Juan Fernández Islands ('Robinson Crusoe Island' 185 km2) at 670 km off the coast, and Easter Island or Rapa Nui (163 km2) at 3000 km from the coast. Chilean coast. Chile also includes the Desventurados Islands (San Félix, San Ambrosio, Gonzales, 3.3 km2), Sala y Gomez (0.12 km2), and the Diego Ramírez Islands. Tierra del Fuego is an island on the south coast and belongs to Chile and Argentina. The southern part of Chile consists of an archipelago with the passage Estrade de Magellanes and in the far south is the island of Cape Horn.

Chile also claims an area of approximately 1,250,000 km2 of Antarctica. Some parts are also claimed by Argentina and Great Britain.

Foothills of the Andes (Andes Patagónico) form the southern part of the island (Mount Darwin, 2180 m), which is largely covered with snow and glaciers due to the low snow line (700 m). The southwestern part in particular has a strongly articulated fjord coast. The north is wooded, becoming a tundra plateau.

Only a few small, most nomadic groups remain of the original Indian population. The most important places in the Chilean part are Porvenir and Manantiales. The main economic activities are sheep farming and since around 1950 oil and natural gas extraction.

Tierra del Fuego was discovered in 1520 by Fernão de Magalhães, who saw fires burning there and named the island after it. 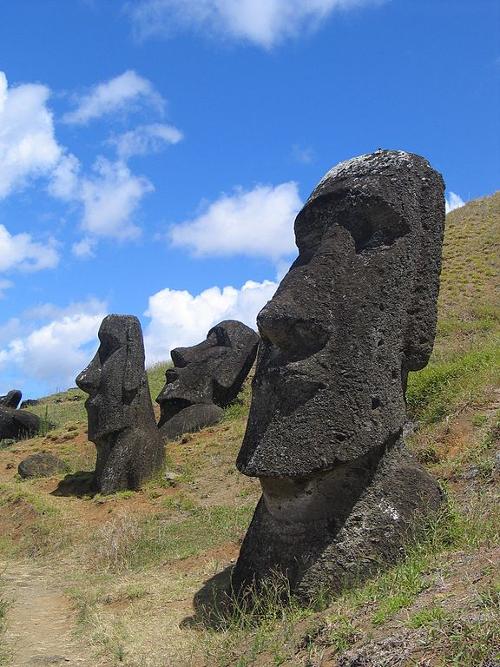 Easter Island (Spanish: Isla de Pascua; native name: Rapa Nui = the Great or Te-pito-o-te-henua = navel of the earth) is a Chilean island in the Pacific Ocean, about 3,500 km away from mainland Chile. . It is considered the easternmost of the Polynesian Islands. The total area of the island is approximately 162.5 km2 and it has approximately 2800 inhabitants, mainly of Polynesian descent.

The volcanic island, up to 600 m high, is triangular in shape, with a volcanic cone at each corner. There is livestock farming, some arable farming for own use, and tourism, including the sale of wood carvings. The island has been accessible to aircraft since 1967.

The island is best known for its gigantic stone statues (probably ancestor statues, called moai by the inhabitants) with an average height of 4-5 meters. The images are spread all over the island and are characterized by the striking long ears. Some statues originally had a cylindrical head covering of red tuff. In the past many statues have stood on a stone platform (called ahu), with their backs to the sea. UNESCO has counted more than 1000 statues and approx. 350 ahu platforms.

The core of these platforms, which sometimes contain a grave, is built in a way that corresponds to the techniques used in Cuzco (Peru): the often very large stone blocks fit precisely and are stacked without grouting material.

The island was discovered on Easter Sunday (April 6) 1722 and visited by a Dutch expedition under Jacob Roggeveen, who was looking for the unknown 'Terra Australis' (South Land). In november 1770 it was taken over by the Spaniard Felipe Gonzales y Haedo for the Spanish Crown under the name San Carlos. On September 9, 1888, the island was taken over by Chile and served as a penal colony for some time.

Chile has a varied landscape due to the relief, geological conditions and different climates. Chile is of course dominated by the Andes Mountains or Cordillera de los Andes. This mountain range occupies the entire eastern border of the country.

Between the two aforementioned mountain ranges is a central lowland, the Llano Intermedio or Valle Longitudinal. In the north of this valley is the Atacama Desert and the Pampa del Tamarugal, two dry mountainous desert areas. The heart of the Atacama consists of a 2000 km2 area, completely without vegetation. Here are also the large salt flats or "salares".

To the south is the fertile "central valley", where most of the people live.

In the far north, the Andes mountain range changes directly into the coastal mountain range. In the south, a small part of the Argentine Patagonian steppe belongs to Chile.

In the provinces of Antofagasta and Atacama there is a third mountain ridge, the Cordillera Domeyko. The actual Central Valley, more than 600 km long, starts at Santiago, turns into a wooded lake area in the province of Valdivia and reaches the Pacific Ocean at Puerto Mont.

In the provinces of Chiloé, Aisén and Magallanes, the Andes flows into the Pacific Ocean. Here, the ice sheet has given the coast a highly articulated character.

To the east of the Andes mountains, in the south is the Patagonian steppe or pampa. The ground here is quite stable and earthquakes hardly occur here. Because the land here fell several times, this area is often flooded by the sea. This created thick rock layers with rich gas and oil reserves. Part of this steppe consists of volcanic basalt layers, which typically form dark "table mountains" with flat tops.

What is special is that after the ice ages fields full of rolling stones, the so-called "rodados patagónicos", remained. 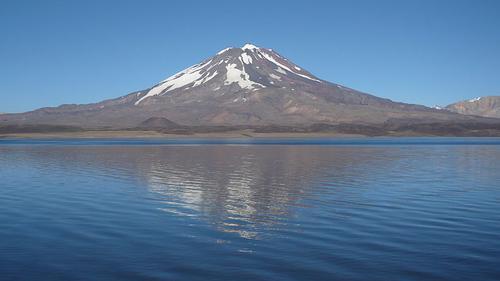 The Chilean or "southern Andes", together with the Rocky Mountains, form the longest mountain system on earth, approximately 7250 km long. The structure of the Andes is quite simple, with long parallel north-south chains and virtually no transverse valleys. Deep valleys can be found between high mountain ranges or on vast plateaus.

Because Chile is located on the unstable western edge of the South American continental shelf, there are many earthquakes, especially in the center and south of the country. There are also hundreds of volcanoes in this area, such as the Tronador, the Fitz Roy and the Maipo.

The Chilean Andes has peaks of more than 7,000 meters and is more than 600 km wide at the height of Northern Chile. The highest peak in Chile is Nevado Ojos del Salado (6893 m) and the highest volcano is Llullaillaco (6739 m). In total there are more than 2000 volcanoes, almost half of which are active in one way or another.

From north to south, the Andes can be divided into four zones:

The Northern Andean Plateau or Altiplano

Due to the great volcanic activities, this area is filled with ash layers and volcanic rocks. The average height here is about 4000 meters. The Andes is here at its widest and dotted with partly still active volcanoes.

This very high part of the Andes is made up of volcanic rocks, but no longer has any active volcanoes. The great height differences in this area are very striking. From Santiago, at an altitude of 500 meters, the mountain range rises steeply within 50 km to the highest mountain in South America, the Aconcagua (6960 m), which by the way lies just on Argentinian territory. Other high peaks are the Tupungato (6800 m) and the Mercedario (6770 m).

Andes of the "Lake District"

The Andes is much lower here than in the Central Andes. The Andes here consists of a lake landscape formed by glaciers and many, often still active volcanoes (up to 3600 meters high). Occasionally earthquakes also take place here; one of the heaviest earthquakes ever recorded on Earth took place off the coast of southern Chile in 1960.

The Andes of Patagonia and Tierra del Fuego

The Andes (up to 4000 meters altitude) borders directly on the sea with steep mountain walls and deep fjords. The volcanoes in the Patagonian Andes are no longer very active. The landscape here is also mainly determined by glacier erosion in the four ice ages of the Pleistocene.

In the east, the glaciers drag out large basins: this created the large rim lakes of the Patagonian Andes, including Lago General Carrera and Lago Argentino. The Patagonian Andes is still covered by two large ice sheets. 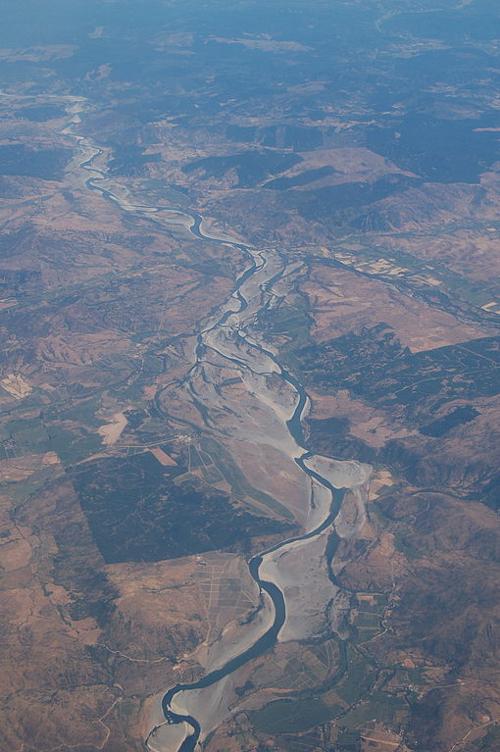 The very steep Andes chain on the west side forms the great watershed of southern South America. The rivers in Chile mainly flow from east to west. In the north, the Río Loa (443 km long) is the only river that has a regular water supply and reaches the ocean.

More to the south, the rivers break through the Cordillera de la Costa and reach the ocean. Irrigation (Río Maule and Río Bío-Bío) and electricity generation are possible here, but the rivers are of no importance to shipping.

Other important rivers are the Río Maipo, the Río Aconcagua and the Río Copiapó.