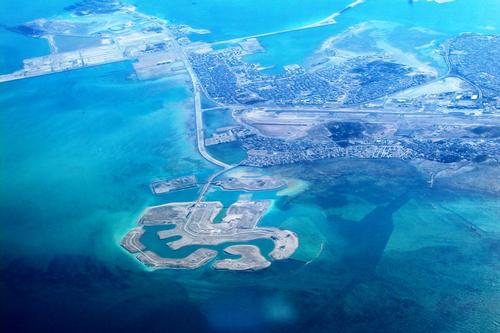 Bahrain Artificial IslandsPhoto: Alhaddadm at the english language wikipedia CC 3.0 no changes made

The best time to book a holiday in Bahrain is during the winter months, the 'coldest' month is January with an average maximum temperature of 20°C.
Bahrain has two UNESCO World Heritage Sites: Qal'at al-Bahrain and seventeen buildings typical of Bahrain's cultural tradition of pearl fishing. That tradition also includes three oyster beds and the Qal'at Bu Mahir fort. Qal'at al-Bahrain is a so-called 'tell', an artificial hill formed by successive human populations, dating back to around 2300 BC.

Besides the oil extraction Bahrain's economy is also in full swing due to tourism. The coastline is dotted with luxury hotels and there are some beaches, including the famous Al Jazayir. Divers marvel at the many coral species, the large oysters and the ship and airplane wrecks. Once a year, Bahrain is in the spotlight worldwide when the Formula 1 spectacle lands on the small island nation. 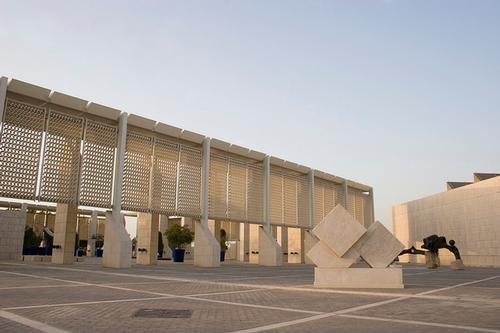 A visit to the Bahrain National Museum is certainly worthwhile, as are the impressive 16th century Bahrain Fort in Karbabad Village and the remains of the Barbar Temple, which was built between 3000 and 2000 BC. built. More of this time is the 25-kilometer King Fahd Causeway between Bahrain and Saudi Arabia, one of the most expensive bridges ever built. Middle Eastern art can be found in the Albareh Art Gallery in Adliya, international art in the La Fontaine art center in Manana.

The Al Fateh Mosque in Juffair has the largest fiberglass dome in the world, and in the Beit Al Qur'an building there is a library with a special collection of manuscripts about the Koran. Nature lovers can head to Al Areen Nature Reserve, and a 400-year-old acacia, the Tree of Life, is on average 300 years older than normal acacias, without a visible water source.