Religion and the Festa do Espírito Santo 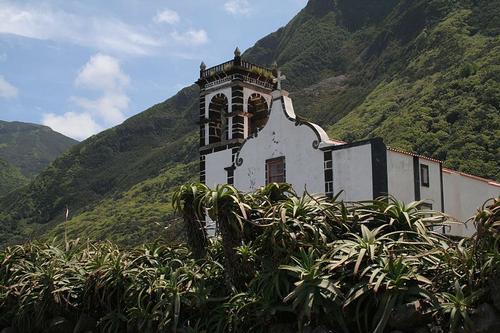 The Azores have been Catholic since the first settlers were settled. The rare Protestant churches were built much later, for example in Ponta Delgada on São Miguel in the 19th century as a result of the many English traders who turned to orange cultivation. From the beginning there was always a strong Jewish community. Not only were the Catholic priests very influential, religious orders such as those of the Franciscans were also important, they founded many churches, monasteries and the first schools. Ninety percent of the population of the Azores is still Roman Catholic. Religion plays a very important role in daily life, although the number of practicing believers, especially among the young, is decreasing every year.

Which is still widely celebrated in the Azores, from Easter to Pentecost and almost no longer on mainland Portugal, is the 13th century Feast of the Holy Spirit, the 'Festa do Espiríto Santo'. The feast is celebrated in several church congregations and every year a new emperor or 'imperador' is appointed by the brotherhoods. The highlight of the celebration is the coronation of the new emperor. Symbols of the festival are the red flag with the dove of the Holy Spirit.
King Dinis ruled Portugal from 1279 and wanted to usher in the era of the Holy Spirit foretold by the prophet Jesus, a kind of earthly paradise in which everyone would be equal and treated equally. Everyone had to renounce personal property, a way of life that was particularly popular with the Franciscan monks. In Italy and France they were persecuted for this way of life, but in Portugal their ideas gained a lot of support. King Dinis, however, went a little further and replaced the priest-led holy masses with a lay service and wanted to abolish the hierarchical ecclesiastical order. The Catholic Church obviously did not like this development at all and issued all kinds of prohibitions and in 1536 instituted an Inquisition, for many Portuguese the signal to flee mainly to Brazil. However, the festival continued to be held in the Azores, especially on the island of Terceira. There the 68 elaborately painted and often built and financed by the people, especially in the 19th century, play an important role, Holy Spirit temples that form the center of the festivities associated with the feast of the Holy Spirit. Some special impérios in Angra do Heroísmo are the Império Dos Inocentes da Guarita, the Império do Outeiro and the Império Império do Espírito Santo do Terreiro. At the moment, the celebration is tolerated by the Catholic Church. 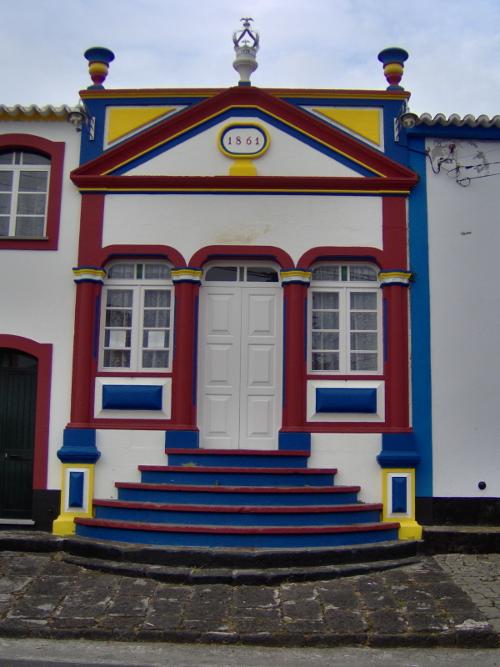 Remarkable religious buildings in the Azores

Igreja da Matriz de São Sebastão: main church of the city of Ponta Delgada, dating back to the 16th century and the best example of the so-called (e) Manuel style (Emanuel I, reign 1495-1521) in the Azores. The Manueline style is characterized by beautiful decorative sculptures, motifs referring to overseas regions of Portugal and nautical symbolism. Also worth seeing are blue and white typical Portuguese tiles, 'azulejos', and beautiful altarpieces. The patron saint of the church is Saint Sebastian (Latin: Sebastian, 3rd century and born in Narbonne). 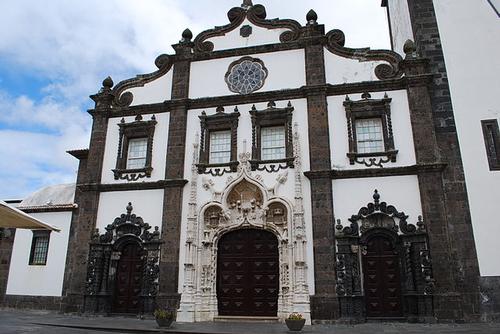 Igreja Matriz: main church of Ribeira Grande, the second city of the Azores. One of the largest and most beautiful churches inthe Azores, built in the early 16th century and expanded several times in later centuries. Beautiful baroque facade with thirteen altars. Igreja de São Miguel: This church in Vila Franca do Campo is dedicated to the patron saint of São Miguel Island and the main church on the island before the 1522 earthquake. After the earthquake, the church was rebuilt in its original state in the very simple Atlantic Gothic style with thick walls, massive rose windows and pointed arch portals. 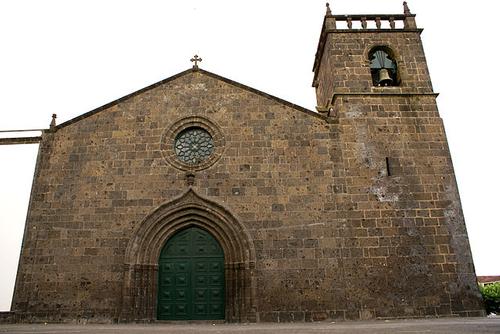 Igreja Matriz Nossa Senhora da Assuncão: first church on the island of Santa Maria, with a history that dates back to around 1450. A portal with Gothic pointed arch dates back to this time. The interior is baroque. 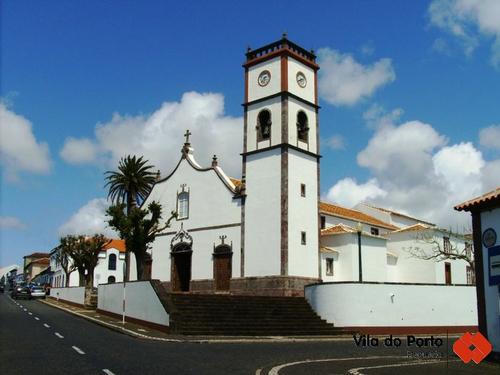 Ermid de Nossa Senhora de Fátima (Santa Maria): dedicated to the virgin Fátima pilgrimage church from 1925 in the town of São Pedsro. The path to the church consists of 154 steps, which is equivalent to the beads of a rosary.

Ermida dos Anjos (Santa Maria): oldest church in the Azores, dating from the 15th century and often later renovated, most recently in 1893. Opposite the church is a statue of Christopher Columbus.

Igreja de São Mateus (Pico): important church for the island of Pico, built in the 19th century on the foundations of a church from the early 16th century. The church is dedicated to Senhor Bom Jesus Milagroso, of which a Brazilian statue is in the church. 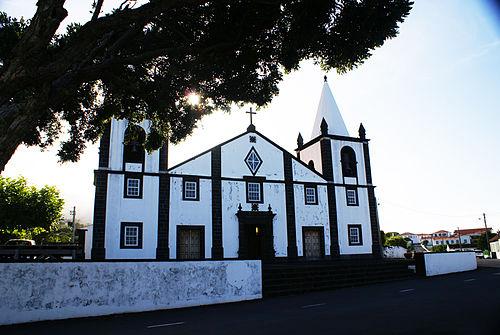 Igreja Matriz de São Jorge: main church of the city of Velas, from the 16-17th century and dedicated to the patron saint of São Jorge Island, Saint George. With a beautiful altarpiece and special 17th century commoden.

Igreja Santa Bárbara (São Jorge): 18th century pilgrimage church that is frequently visited by the islanders to pray or attend a celebration. The many donations from pilgrims ensured that this church with its exuberant interior decorations is considered one of the most beautiful churches in the Azores. The interior is typical of the Portuguese Baroque with a wooden ceiling, azulejo pictures depicting the life of Saint Barbara, a basalt baptismal font from the 16th century and beautiful furniture. 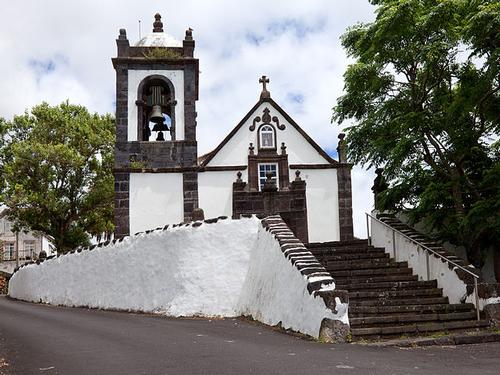 Sé Catedral do Santíssimo Salvador (Terceira): only cathedral and largest church in the Azores, built from 1560 and not completed until the 17th century. Reconstructed after the 1980 earthquake. A special feature is a 17th century altar covered with a relief of hammered silver.

Igreja de São Sebastião (São Sebastião, Terceira): one of the oldest churches in the Azores (1455). very ground renovated with features of the Atlantic Gothic. Beautiful frescoes that are unique to the Azores.

Ermida de Nossa Senhora da Ajuda (Santa Cruz da Graciosa, Graciosa): one of three pilgrimage churches that can be found on the 129 meter high volcanic cone. This church is the oldest of the three. 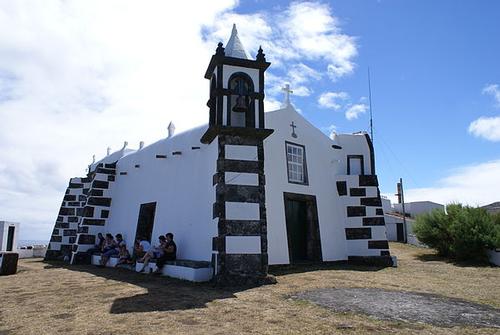 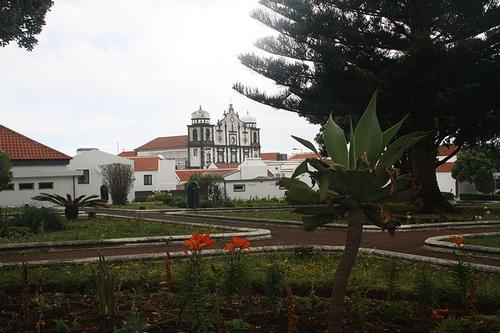