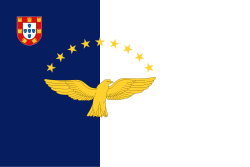 From a botanical and zoological point of view, the Azores belong to Macaronesia, the name for the island groups of volcanic origin located in the eastern Atlantic Ocean and west of West Africa. In addition to the Azores, Macaronesia also includes the Canary Islands, Cape Verde, Madeira (including Porto Santo and the Ilhas Desertas) and the Ilhas Selvagens. now only 10% of the islands are covered with forests. Agriculture and housing have almost completely destroyed the original forests. Instead, the Japanese cedar, which is not much appreciated by ecologists, was planted, which, however, feels very much at home in the Azores, now makes up almost half of all forests and is used to combat erosion, retain rainwater, provide shade for livestock and used for wood.

The vast majority of seeds are spread across the island through the feathers of migratory birds. In addition, many plants from many countries have been brought to the island by people;about two thirds of the 1,300 plants, ferns, mosses (more than 400 species) and herbs have ever been introduced, only about 60 species are endemic and often in danger of extinction. Every year new beautiful flowers and plants are discovered such as the Azores Bell and Daphne flax spurge or Euphorbia stygiana. Other native species include tree heather, large-leaved blueberry, Pau Branco, bloodwood tree, Portuguese cherry laurel, changeable flower, sea fennel, pale yellow dried flower, gluey herb, stag horn plantain, wall finch, tar guichelle, wood-huckleweed, knotweed, arrow cane, stripe fern, double-headed fern, Indian lilac and ironwood tree Tamujo tree. 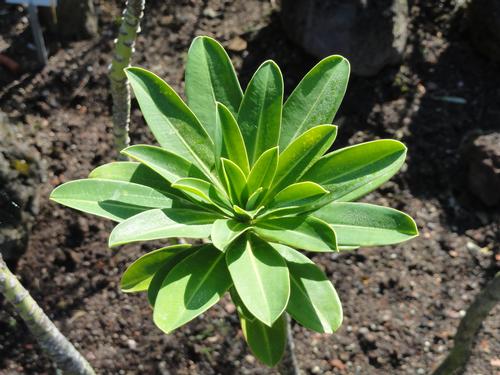 In the lower parts, a macchia species predominates with mainly evergreen vegetation. Where the average altitudes are between 600 and 1000 meters, the image is determined by the native short-needle juniper and the Azores laurel or Laurus azorica. Of the native protected Azores laurel forests, although the 'trees' do not exceed shrub height, large parts are still preserved on the islands of São Miguel, Pico, Terceira and Flores. 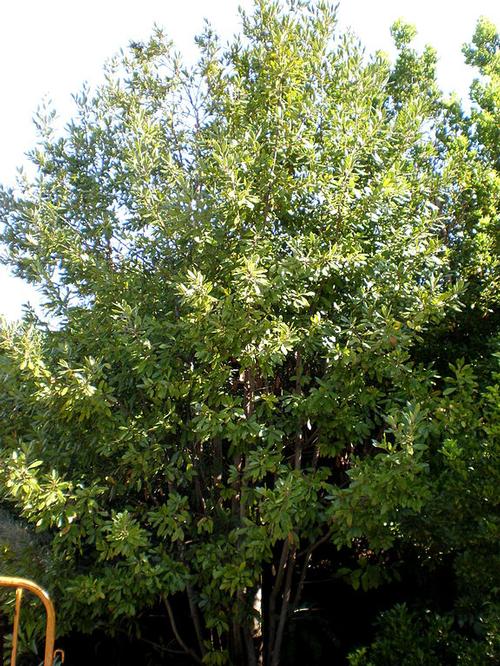 Other typical varieties are the shrub Viburnum tinis, bilberry and Azores holly. These species all grow to a height of approx. 1000 meters, on the island of Pico, Azores tree heather, which grows to tree height on the coast, and broom heather also occur up to 2000 meters. The wax gale is threatened by the cruciferous sticky seed imported from Australia.

The hydrangea, especially in spherical shape, is the most famous and most typical plant species of the Azores. Especially on the blue island 'ilha azul' Faial you can enjoy a blue-white hydrangea splendor in the flowering period from June to September. 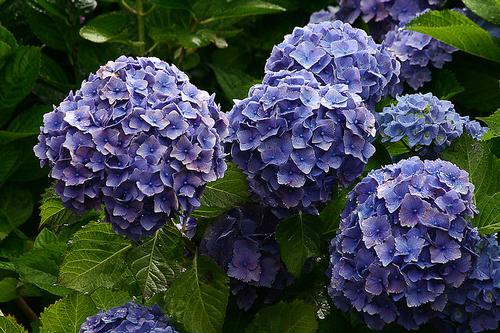 Hydrangea, typical of the AzoresPhoto: Nono vlf CC 3.0 Unported no changes made

Other beautiful flowering plants are marshmallows, belladonna lily and amaryllis. An annoying immigrant is the giant rhubarb from Brazil, which displaces other plants. Since 2008, a program has been started to prevent further spread of the plant. Another very serious threat to the native Azorian flora is ornamental ginger, native to the Himalayas. 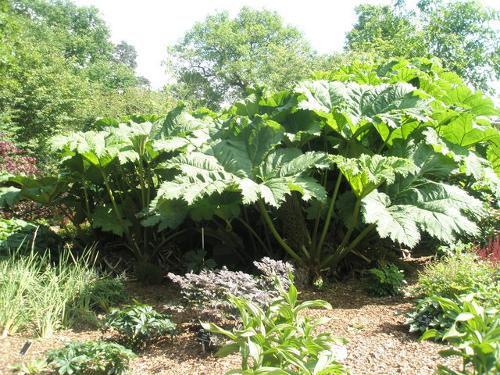 Giant rhubarb threatens other plants in the AzoresPhoto: Basher Eyre CC 2.0 Generic no changes made

Other special plant species include wax myrtle, snowball laurel, Azores buckthorn, Portuguese cherry laurel, large-leaved blueberry, rooting chain fern and tree fern. The largest dragon tree in the Azores is on the island of Pico at the former Carmelite monastery Casa Conventual dos Carmelitas in the town of Madalena. 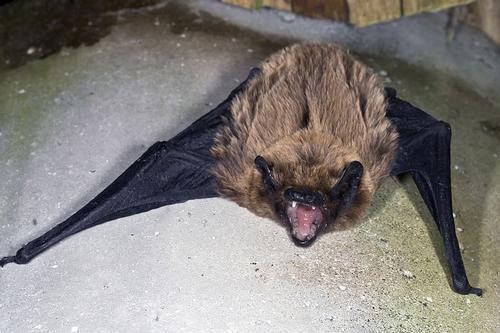 Due to the great distance between the mainland and the islands, the Azores are and will remain isolated and therefore difficult to reach for mammals. Only the Azores bat and the eared bat are native to the Azores, the other mammals were introduced by human influences. The Iberian lake frog is also not originally found in the Azores, but was probably introduced for the control of mosquitoes.

In total there are nine mammal species in the Azores, the aforementioned Azores bat and the long-eared bat and one insect-eater, the hedgehog, one lagomorph, the rabbit, three rodents, brown rat, black rat and house mouse, and two predators, the ferret and the weasel. The native, protected Azores bat or Nyctalus azoreum is one of the few bat species that is active not only just after sunset, but also during the day.

About 185 bird species have been spotted in the Azores, 35 of which are brothers. Of those brethren, ten subspecies are endemic and one are endemic. Many birds use the islands as a stopover during their winter or summer migration. A changing climate worldwide means more exotic species are arriving in the Azores, often due to the increasing activity of hurricanes between North and Central America and the Caribbean. And that not only concerns water birds, but for some time also increasingly species that only occur on land. Regular migrants are common tern, black-headed gull and the great mayor. Wagtail, rock pigeon, turnstone, sandpiper, little egret and whimbrel occur along the coast and in the shallow waters created by lava flowing into the sea. The Kentish plover is more common on the sandy beaches, the high inaccessible cliffs are a nice territory for different species of petrels and shearwaters. The Kuhl's petrel is found on all islands, as well as various tern species, including Rose's tern. In mixed forest and meadow areas we see finch species, blackbirds, blackhead, great yellow wagtail and canary. The golden rooster is found in forests, with three different subspecies, including Santa Maria, that only occur on those specific islands. Sparrows and starlings are the most common birds in the Azores.

Characteristic of the Azores is a subspecies of the buzzard, the 'Buteo buteo rothschildi', which, however, is getting more and more difficult and traditionally did not occur on Flores and Corvo, but is now also extinct on Santa Maria and Graciosa. Another rare species is the Azores bullfinch or 'priolo' in Portuguese, of which only a few hundred to more than a thousand can be found in the east of the island of São Miguel, in the protected area of Serra da Tronqueira. 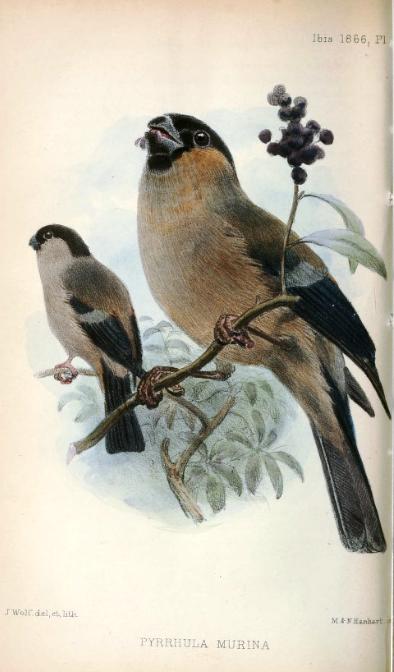 The Azores goldfinch occurs only in the AzoresPhoto: Public domain

On the cliffs of the 'new' Vulcão Capelinhos, between 150-200 pairs of the Larus michahellis atlantis, a subspecies of the yellow-legged gull, nest. Variations on the European mainland species include Azorean blackbird, Azorean finch, and Azorean wood pigeon. The uninhabited island of Ilhéu de Vila Franca is on the international list of Important Bird Areas (IBA) because of the huge numbers of seabirds that hatch their offspring there, including the Roseate Tern and the Kuhls Shearwater. On two islands off the coast of the island of Graciosa, including Ilhéu da Praia, the endemic and very rare Monteiro's petrel breeds.

Due to the warm gulf currents, numerous species of fish can be found in the water, about 50 of which are edible species. The Azores are among the most fish-rich areas in the world, including swordfish, barracuda, mackerel, real bonito, garter or silver swordfish, blue marlin, white marlin, blue throats, forkbeard, wreckfish, spotted wrasse, red sea bream, mullet, brown grouper, red scorpionfish, yellowfin tuna and bigeye tuna. The old crater of the Formigas Islands is inhabited by peacock wrasse, rainbow wrasse, sergeant major fish, itajara and long-beaked spearfish, among others. Furthermore, the Azores offer an excellent opportunity to spot whales and dolphins. Especially in the period June-September, there are a lot of cetaceans in the ocean around the Azores. Many whale watching excursions are offered, especially from the islands of Pico, Faial and São Miguel. In the spring you can see blue whales, in the summer many sperm whales and smaller whale species such as the Indian pilot whale. A total of 24 whale and dolphin species have been seen in the waters around the Azores, including Cuvier's dolphin, northern bottlenose whale, common or North Sea beaked whale, common dolphin, bottlenose dolphin, gramper or gray dolphin, Atlantic spotted or spot dolphin, striped dolphin, beaked whale dolphin of the Blainville, True's beaked whale, Gervais beaked whale, sei whale, humpback whale, fin whale, minke whale, Bryde's whale. Sometimes one sees an orca, black killer whale, beaked dolphin, dwarf sperm whale, smallest sperm whale or northern right whale. The last species was once again spotted in the waters around the Azores in 2009 after more than 110 years. 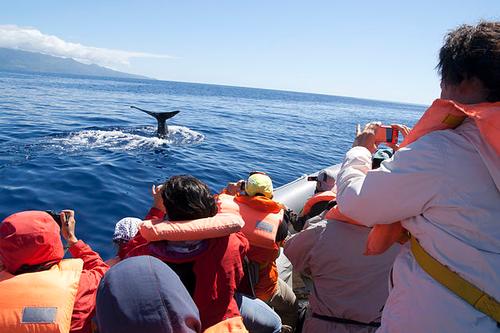 Whale watching is popular in the AzoresPhoto: Luca Nebuloni CC 2.0 Generic no changes made

The Gruta das Torres volcanic tunnel, discovered not so long ago (1990), is home to a special fauna, including an endemic ground beetle species and a glass-winged cicada.

Cow from the Azores: Ramo Grande

From the 15th century onwards, domestic animals were soon introduced to the Azores by Portuguese settlers. The cow was the most important in this, not only because of the milk, but they were also used for plowing and pulling carts. Breeds of cows then importedThe Alentejana, the Mirandesa, the Minhota and the Algarvia were honored. It is suspected that species were also imported from Flanders, but it is not known which species.

The following five centuries continued breeding between all these species and eventually a specific species for the Azores emerged, the Ramo Grande. In the 1950s, Frisians were imported from England and America and a breeding program was set up on the islands of São Miguel and Terceira through artificial insemination. A few decades later, Holsteiners (dairy cows), Limousin, Charolais and Fleckvieh (all beef cows) came from the Netherlands, Germany, France and Canada. This influx of races seriously oppressed the Ramo Grande and was in danger of extinction. However, a number of concerned farmers stepped in to defend the Ramo Grande and try to keep the breed for the Azores. All individual cows are now registered and the breed characteristics are officially recorded. 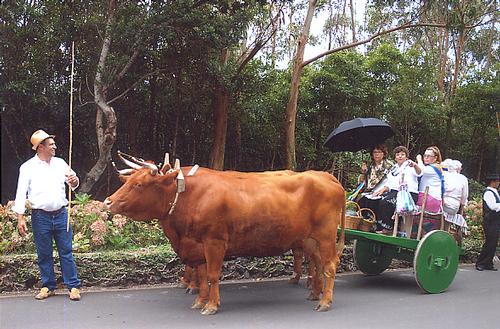 The Ramo Grande is also used to drive tourists in the AzoresPhoto: Public domain