Argentina (Spanish: República Argentina) is a republic in the south of South America. The total area of the country is 2,766,889 km2, making Argentina the second largest country in South America after Brazil. 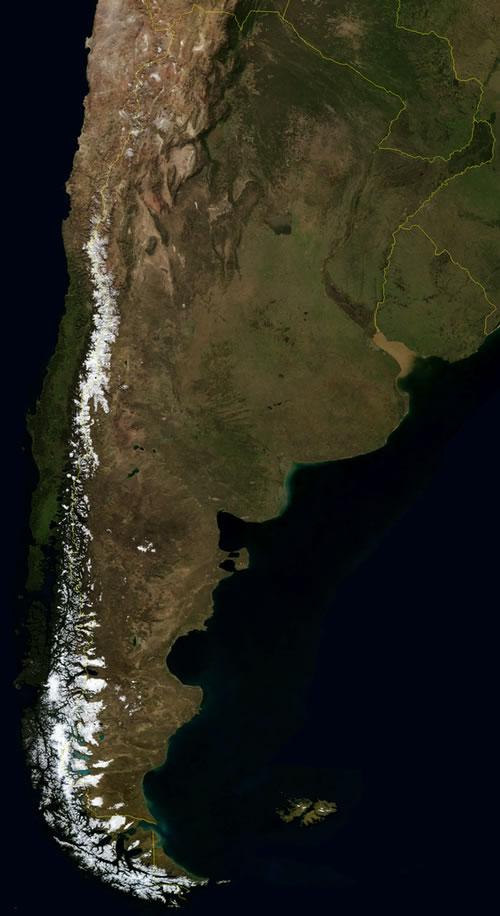 Argentina has no territories outside the continental area, but has claims to the Falkland Islands (Islas Malvinas), South Georgia, the South Orkney Islands (Orkadas del Sud), as well as to a sector of the Antarctic continent, in total approx. 1 , 23 million km2. In addition, it believes it is entitled to the continental shelf, Mar Argentino, lying off the east coast. After the Amazon River in Brazil, the Paraña River, which enters the country at Iguazú, is the longest river in South America with a total length of 4500 kilometers, of which 1800 km through Argentina.

The Falkland Islands (Spanish: Islas Malvinas) have been occupied by Great Britain since 1833. Yet since then Argentina has never given up on its claims to the islands.In 1982 this even led to a real war between Argentina and Great Britain, which was won by the British. 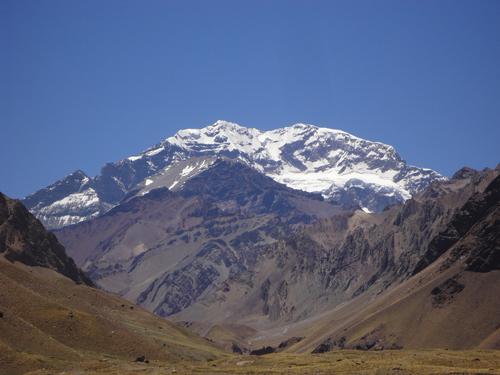 From a landscape point of view, Argentina can be divided into four regions:

The northwest with the Andes mountains and the Altiplano (means high mountains). At 6960 meters, Aconcagua is the highest mountain in the Andes and in the entire western hemisphere (Argentina's lowest point is Salinas Chicas on the Valdes peninsula, -40 meters). Other high peaks are the Cerro Bonete (6872 m) and the volcano Llullaillaco (6723 m) and dozens of mountains above 6000 meters. The Andes also has large glaciers, including the Perito Moreno that moves many centimeters every year, as well as huge valleys and dozens of salt lakes. The Altiplano slowly changes into the pre-Cordillera, a mountain range with large ravines. Slightly further west is the El Chaco area of endless savannas covered in impenetrable thickets.

The northeast, one large subtropical lowland with savannas, forests, rivers and swamps. Major rivers such as the Paraná, Uruguay and Paraguay enter the country here. All these rivers flow into the great delta of the Rio de la Plata. This is also where most of Argentina's forest areas are located, including the rainforests of the province of Misiones, in the border area with neighboring Brazil and Paraguay. In the northern part of this area, dozens of rivers and waterfalls adorn the landscape, of which the Iguazú is the most famous and one of the widest in the world. The falls are located at the border triangle of Argentina, Brazil and Paraguay. To the south, the landscape changes into one large swamp area, Los Esteros del Iberá. The province of Entre Rios with a lot of grassland is located even further south.

In the center of Argentina is the "Pampa Humeda", a vast expanse of fertile plain. The pampas are located in the center of Argentina and cover a quarter of the total territory. The northern and middle part form the humid Pampa Húmeda, the south and west form the dry Pampa Seca. The Pampa Húmeda is somewhat hilly with lots of vegetation and extensive meadows. The Pampa Seca is flatter and drier. To the northwest of the pampas area is the Las Sierras de Cordóba, the central mountainous region. It is also home to Argentina's largest lake, Mar Chiquita, and the country's largest salt lake, Salinas Grandes. 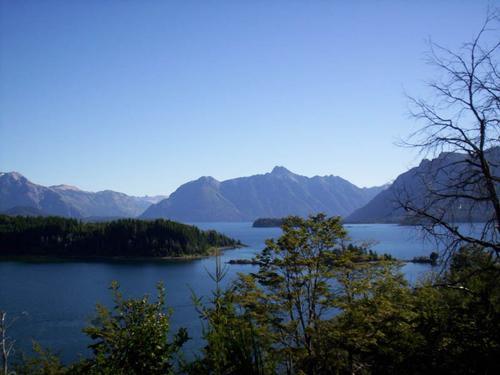 In the south lies Patagonia, with a large plain along the east coast and the Andes mountains in the west. The area covers about a quarter of the country. Two large rivers flow from here, the Rio Colorado and the Negro. Beautifully situated lakes in the Patagonian Andes are Nahuel Huapi and Lago Argentino. In total, this lake area has more than 40 lakes. Furthermore, this area has enormous forests, snow-capped peaks and glaciers. The mountains in the lake district are not that high anymore, but worth noting are the volcano Lanín (3776 m) and the cerro Tronador (3554 m). It is characteristic that the mountains here are becoming increasingly volcanic.

Patagonia extends all the way to Tierra del Fuego, an island in the far south of Argentina. Patagonia can be divided into the flat desert-like part from the Atlantic Ocean to the Andes, and the area around the Andes. Here the Andes is covered by a permanent ice sheet: the Campos de Hielos, the largest ice mass on the mainland after the South Pole (18,000 km2). We also encounter enormous glaciers, lakes and large deciduous forests here. More inland we find a gigantic steppe area; flat, large rocks, table mountains and little vegetation due to the very low rainfall. This part of Patagonia slowly turns into a desert due to the extreme drought, constant strong winds and soil erosion. The northern part of Tierra del Fuego is flat and covered with peat soil. To the south it becomes more forest and mountainous, and here are also beautiful lakes and fjords.