The many climates found in Argentina are mainly determined by the great expanse in the north-south direction and by the presence of the Andes Mountains along the west coast of South America. Argentina has several climate zones, the average temperature of which decreases towards the south. Argentina, for example, has a subtropical north while the south almost borders on the polar region, with the associated low temperatures.

Argentina is located in the southern hemisphere, so the seasons are opposite to those of the UK. Summer lasts from December to March and winter from June to September. 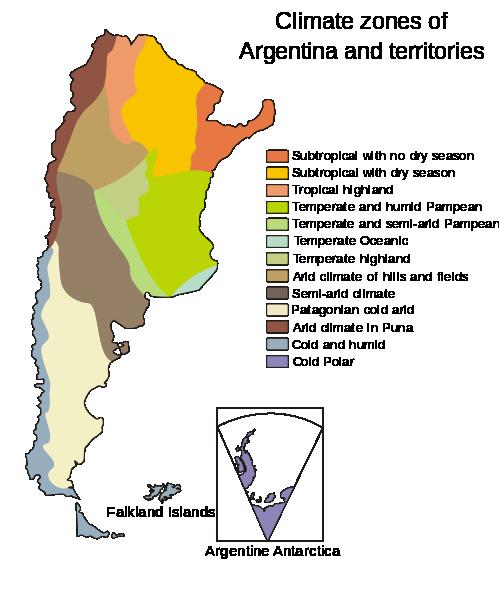 The northeast of the country is humid (up to 2000 mm of rainfall per year) and warm. Located roughly in the middle of this area, Buenos Aires has an average annual temperature of 16°C, a July temperature of 9°C and a January temperature of 23°C. In general there is a moderate climate here, with winter temperatures barely below 0°C; in summer, temperatures can reach 40°C. Annual rainfall, often in the form of downpours, is about 940 mm and occurs irregularly throughout the year. The humidity can be very high, especially in summer (December to March). The rapid temperature fluctuations are remarkable, which can amount to a difference of more than 20°C in 24 hours. There are also downright sultry periods in winter and chilly days in summer. 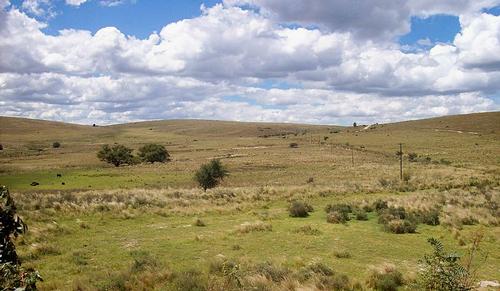 The dry Pampa Seca has quite warm summers and mild winters. Yet there are big differences: in Rosario it is quite warm for more than 300 days, further south in Bahia Blanca no more than 150 days. The entire area receives an average of only 400 mm of rain per year. The Pampa Húmeda is much more humid with a lot of vegetation.

From the Atlantic coast to the west, the country is increasingly under the influence of the mountain range, reducing rainfall as the predominantly north-westerly winds of moderate latitude cause most of the rainfall on the west coast of Chile. The western part of Argentina has a clear desert climate here and there. Here are the driest and warmest places in the country, with temperatures regularly above 40 °C. Further south, around the city of Mendoza, the temperatures are a bit more pleasant. 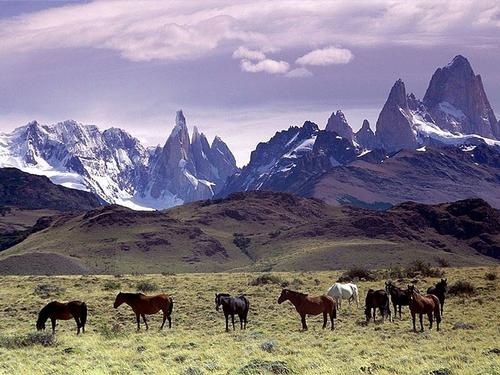 The steppes and deserts of Patagonia lie in a zone with predominantly westerly winds. In the spring and autumn there can be heavy storms in this area. The area lies in the rain shadow of the high Cordillera de Andes, which means that in eastern Patagonia there is often only 200 mm of rainfall per year.

Summers in the northwest are very hot, but it is tolerable due to the low humidity. In the summer it easily reaches 35 °C, in the winter over about 18 °C and at night around freezing point. Summer is the rainy season with very strong showers that start flooding in no time.

Tierra del Fuego in the far south has an unpleasant climate due to the currents of the ocean and the foothills of the Andes mountains. In the summer there is a lot of rain and the wind blows hard. The temperatures do not exceed 15 °C. In winter the temperatures are quite mild. 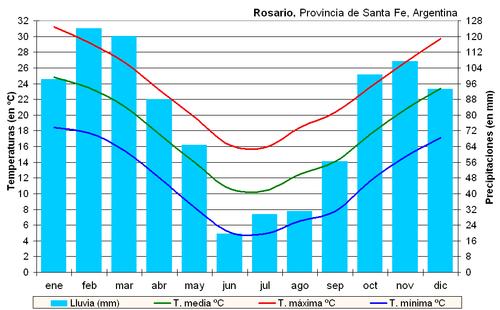 Argentina has two special wind phenomena, both of which are caused by long-stretching depressions. The warm, humid "zonda" carries tropical air like a northerly wind, at the front of a depression. The cold "pampero", so called because the air brought in from the south often carries dust from the pampas, is characterized by strong gusts that occur while passing the cold front of the depression.