Angolans are deeply religious people who, whether they practice Christianity, Islam, or forms of traditional religion, value and have great respect for religious events, rituals, and ceremonies. 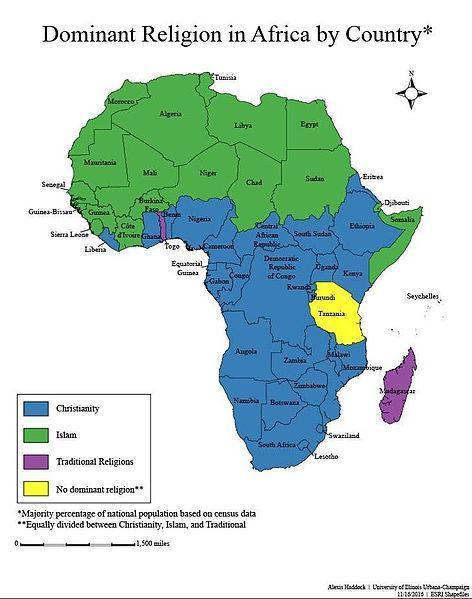 Overview of the main religions in Africa by countryPhoto: Alexis Haddock CC 4.0 no changes made

Christianity is the dominant religion in Angola, adhered to by about 55% of the population. Most Christians are Roman Catholic, while others belong to Protestant and Evangelical denominations. The coastal area of Angola in the west, which was part of the prominent fifteenth-century Congo kingdom, was one of the earliest areas in Africa to introduce Christianity. The religion was introduced to the kingdom by the Portuguese in 1491 when the first missionaries arrived. By the end of the fifteenth century, the faith was very popular. Since the colonial period, the Roman Catholic Church has played a major role in providing Western education to the people of Angola. Today, many primary and secondary schools are run by the church. Although the influence of Roman Catholics in higher education is marginal, the church does support the Universidade Católica de Angola since its inception in 1999.

The English Baptist Church was the first Protestant organization in Angola, founding a mission in São Salvador (now M'banza Kongo) under the Bakongo in 1878. Other Protestant missions from other parts of Europe, the United States and Canada followed in different areas of Angola.

In the past, especially during the colonial period, Protestant activities in Angola were frowned upon, and this greatly hindered the growth of Protestantism. In recent years, however, the number of Protestant and evangelical denominations has steadily increased. Protestants now make up an estimated 20% of the population. Some of the fastest growing denominations include the Evangelical Reformed churches, Baptists, Assemblies of God, the Seventh-day Adventist or Adventist Church, the Presbyterian Church, the Church of Christ, the Congregational Church, and the various Pentecostal churches, which are rapidly gaining popularity throughout sub-Saharan Africa.

Independent African churches are churches founded exclusively by African Christians, as opposed to the regular mission churches introduced by Europeans. They are often founded by a charismatic leader who, more often than not, originally belonged to a mission church. So the native churches often begin as a split from the mission churches founded by Europe. In Angola, a number of independent churches flourish, which broadly fall into three types. The first type, the Kimbangui Church, grew out of protests by Africans against the missionary churches' opposition to certain aspects of African traditional customs, such as polygamy, puberty rites and marriage customs. 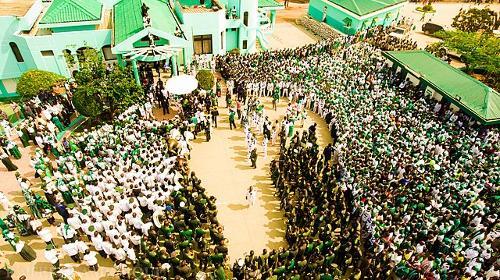 he second type of independent African churches consists of charismatic, Holy Spirit ministries that claim a superior spirituality than other churches. More than churches of the first type, Pentecostal churches have radically departed from the patterns of orthodox Christianity and liberal Protestantism on doctrinal issues and worship that involves ecstatic singing and hand clapping, dancing, loud prayers, and the manifestation of the Holy Spirit through speaking in tongues. Apart from informal worship, Pentecostals interpret the Bible literally and believe in prophecy, miracles through prayer, and faith healing.

ome churches that lie in between the two previously discussed categories of independent African churches, unlike the Kimbangists, do not endorse the open inclusion of African tradition in Christianity. Nor are they considered as spiritual as the charismatic Pentecostal churches. An example of such a church is the Igreja Apostolica Africana em Angola.

An estimated 47% of the Angolan population, especially in rural areas, still practice various forms of indigenous religions. Even for many people who profess Christianity and claim membership in Christian denominations, their Christian faith does not preclude them from identifying with aspects of traditional religious practices and beliefs. It is also not uncommon for Western educated people in urban areas to consult traditional priests.

There are as many indigenous religions as ethnic groups or subgroups in Angola. Typically, ethnic groups, subgroups, tribal affiliations, and even families identify with certain traditional religions, although related groups often share specific elements of religious beliefs and practices. In general, each religion has its own set of beliefs, values, rituals, and worship systems. However, they often share some common features, such as a belief in a supreme god who is referred to by different names according to the ethno-linguistic group.

The arrival of the Portuguese on the Angolan coast in the late 15th century and their ecumenical ventures thereafter ensured that the region would be predominantly Christian. The Congo Kingdom, part of which included northern Angola, existed as a Christian kingdom for centuries. Given the scenario, Islam did not emerge as a significant religion in Angola. Possible Islamic influences from the Swahili coast of East Africa remained absent, and Angola has been a predominantly Christian nation. Muslims make up only 1 to 2.5% of the population.

In recent years, however, the Muslim community in Angola has grown significantly and Islamic activities have become more common in the major cities. Mosques have sprung up in a number of places and Quranic schools have been built to provide Islamic instruction and teach the Arabic language to adherents. The Muslim community consists mainly of foreigners, especially businessmen and migrants from West Africa and Southwest Asia.

A small portion of the Angolan population, again mainly foreigners, professes other forms of religion. Hinduism is practiced in the Asian community. Synagogues in urban areas serve the interests of the Jewish community, and Greek Orthodox churches also occur.

Around 1943, Simon Mtoko (born February 24, 1918 as Simão Gonçalves Toco), a Protestant from the province of Uige, went to Leopold City in the Belgian Congo and founded his own church there in 1949, strongly related to the Kimbanguistic movement (a variant of Baptism). Mtoko appointed himself a prophet and twelve of his followers apostles. He and the members of his church were exiled by the Belgian authorities, but in 1950 he returned to Angola where his church fully flourished. The Portuguese, fearful of his influence, sent Mtoko and his family into exile again in 1963, this time to the island of São Miguel in the Azores, where he remained for a total of eleven years.
In 1974, he returned to Angola but soon came into conflict with the then regime of dictator António de Oliveira Salazar. Mtoko died in 1984. Every April, thousands of followers of the Tokoist Church (the Angolan branch of Our Lord Jesus Christ in the World) make a pilgrimage to the town of Catete near Luanda to celebrate the anniversary of their founder's encounter with God there and his visit to the town.