The People's Democratic Republic of Algeria, in Arabic 'Al-Djaza'ir' and in Berber´Lzayer´, is a country in North Africa, which together with Morocco, Tunisia, Mauritania and Libya belongs to the Maghreb, a designation for the northwest of Africa but also a political unit under the name Union du Maghreb Arabe (UMA).

Algeria is bordered to the west by Morocco (1900 km) and Western Sahara (41 km), to the southwest and south by Mauritania (460 km) and Mali (1359 km), in the south-east at Niger (951 km), in the east to Libya (989 km) and in the north-east to Tunisia (1034 km). In the mountainous north, Algeria borders the Mediterranean Sea and the coastline is 998 km long. The distance from Algiers in the north to Tamanrasset in the south is more than 2000 km, which is a greater distance than the distance from Algiers to Paris. 500 kilometers south from the coast begins the Sahara or the 'Great South', as the Algerians also call the desert. Algeria consists of four-fifths desert, which is clearly visible in the satellite photo below. 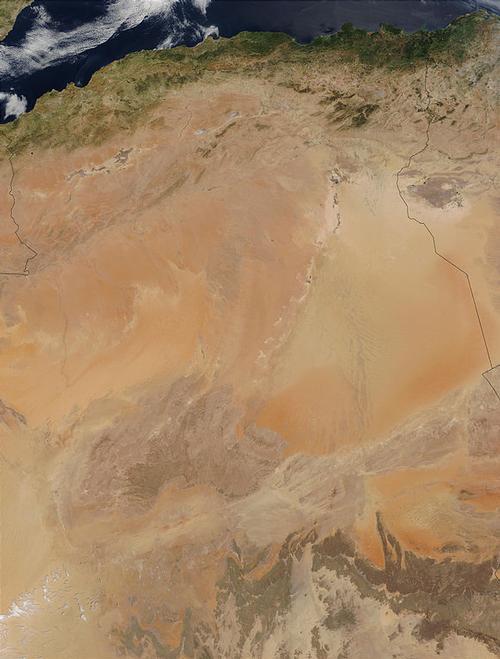 The non-permanently inhabited Habiba Islands are located in the Sea of Alboran, the westernmost part of the Mediterranean, about 12 kilometers from the northwest coast of Algeria and the city of Oran. The archipelago, together only 0.4 km2 in size and originally volcanic, consists of two large islands, including the main island of Touria, and about 20 smaller islands. The maximum height of the archipelago is 103 meters. 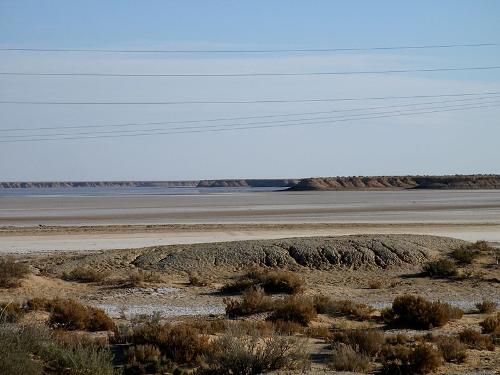 Most Algerians live in the north of the country, especially in the narrow coastal plain, where the capital Algiers is located. The coast of Algeria is generally very rocky, but there are also many sandy beaches and bays. The lowest point in Algeria is Chott Melrhir, a salt lake in northeastern Algeria, which is also the largest lake in the country. Practically the whole lake is below sea level, and Algeria's lowest point is roughly in the middle of the lake at-40 meters. 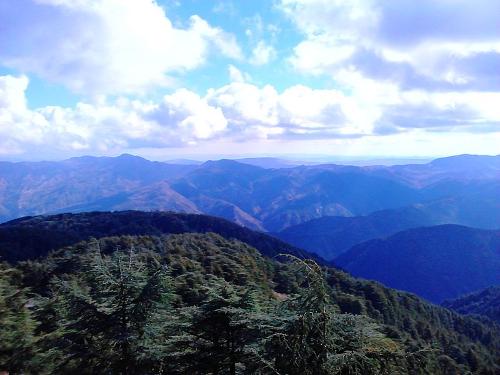 The coastal region of Algeria gradually turns into the Atlas Mountains, a relatively young mountain range in northwest Africa that runs from west to east through Morocco, Algeria and Tunisia and is the same type of mountain range as the Alps in Europe. The Atlas Mountains can be divided into a number of smaller mountain ranges, in Algeria there is partly the Little Atlas (also called Tell-Atlas), and further the Sahara-Atlas and the Aurès mountains in its entirety.

The Small or Tell-Atlas is a mountain range that runs parallel to the Mediterranean coast for a length of approximately 1500 km through Morocco, Algeria and Tunisia, and eventually joins the Sahara-Atlas in eastern Algeria to form the Tébessa mountain range and the Medjerda mountain range. The Tell-Atlas has an average height of 1500 meters, with the highest point being the Lalla Khedidja (2308 m) in the Jurjura mountain range, part of the Tell-Atlas. The Tell-Atlas forms a natural barrier against the Mediterranean Sea and at the foot of this mountain range are cities such as Algiers and Oran. The Sahara Atlas forms a natural barrier against the Sahara Desert and between these two mountains lies the very fertile Chelif Valley and rivers such as the Chelif (also known as Chéliff or Sheliff, 725 km), the longest river in the country, the Medjerda (total 450 km), which flows from Northeast Algeria to Tunisia, and the Seybouse (225 km).

One of the most beautiful areas of Algeria is Tlemcen National Park in northwestern Algeria. In addition to the extensive forests of Zariffet and Aïn Fezza, this varied area also includes the waterfalls of Cascades d'El Ourit and the stalactite caves of Beni Add.

The Sahara Atlas is mostly in Algeria with an eastern spur in Tunisia. This mountain range is more impressive than the Tell-Atlas, with the highest point being the Djebel Aissa (2236 m) in the Ksour mountain range. Other mountain ranges in the Sahara Atlas are Amour, Oued-Naïl, Hodna, Nememcha and Zab. To the south of the Sahara Atlas lie Hautes Plaines or Hauts Plateaux, a steppe-like plateau with grasses and low shrubs, where during the rainy season shallow salt lakes or reservoirs called 'chotts' are formed, which dry up again in the summer and then form salt plains. One of the largest lakes in this area is Chott Ech Chergui Lake. Hautes Plaines have an average elevation of 1100-1300 meters in the west and 400 meters in the east. 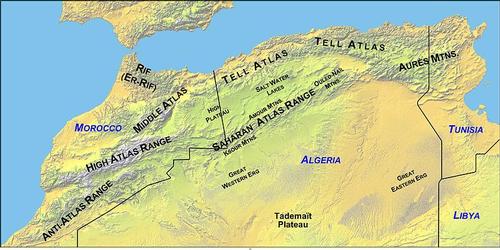 On the south side of Hautes Plaines begins the Algerian Sahara (Sahara means desert in Arabic), a dry, empty and desolate area, but with a great variety of landscapes that also present themselves in all kinds of colors. The average altitude of the Algerian Sahara is 460 meters.

In the central part of the Algerian Sahara are the vast sandy deserts of the Eastern (Grand Erg Oriental, approx. 120,000 km2) and Western Erg (Grand Erg Occidental, approx. 80,000 km2), with oasis cities on the edge of the sand dunes such as El Oued in Northeast Algeria, El Menia in Central Algeria and Taghit in Western Algeria. 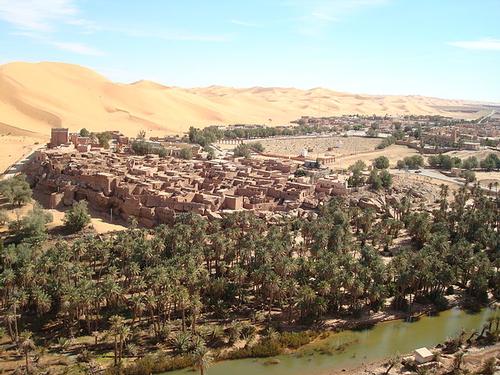 The south of the Algerian Sahara is much more rocky and is dominated by the Ahaggar or Hoggar Mountains, home to the highest mountains in Algeria, the Tahat (3003 m), the L'Ilamane (2780 m) and the Assekrem (2788 m), a flattened mountain located on the Atakor plateau.

In the southeast of the Algerian Sahara lies the high plateau Tassili n'Ajjer with an area of approx. 72,000 km². This region, much of it a national park, is also known for the many thousands of prehistoric drawings from the Neolithic that have been found here since 1933. The highest point of Tassili n'Ajjer is the Adrar Afao (2158 m) and special are the remarkable and spectacular rock formations and 'rock forests' of eroded sand. Due to the erosion, there are also about 300 rock arches in this area. 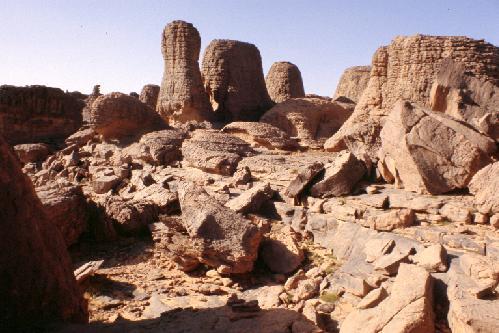 Algeria straddles the continent where African and European continental plates rub against each other, causing earthquakes in the north of the country that sometimes have devastating effects. Small earthquakes are quite common, in July 2014 an earthquake killed six people and injured 420. 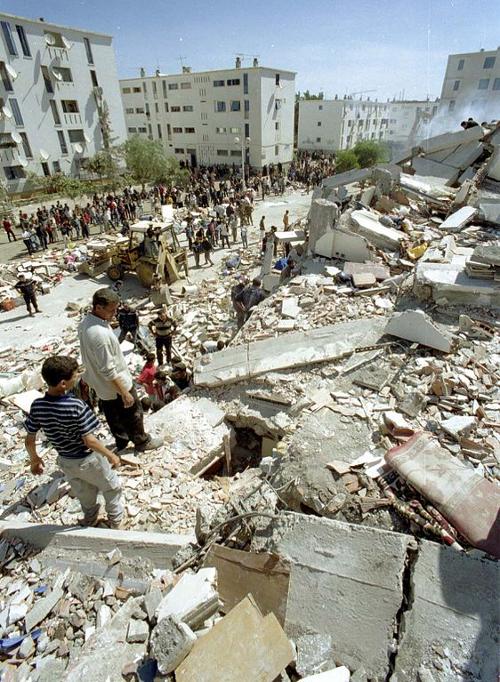 Consequences of earthquake in Boumerdès (2003)Photo: Magharebia CC 2.0 Generic no changes made