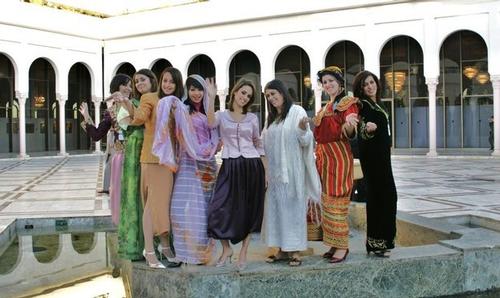 Together, Arabs and Berbers make up 99% of the Algerian population. It is actually impossible to say how many Arabs and how many Berbers live in Algeria. Intermarriage between these population groups has been so massive for centuries that it is no longer possible to make a clear distinction. The skin color in the street scene can then differ from dark, negro to blond-haired and white Berbers.

It can be said that about 75% of the population feels Arab and 20-25% feels Berber, especially around the towns of Kabyli, Aures, M'Zab and Hoggar. There are four main Berber tribes, Kabyle, the largest group, and Shawiya, M'zabite and Tuaregs, each with their own dialect, culture and area of residence in Algeria.

The nomadic Tuaregs are the most independent of the Berber tribes. Tuareg comes from the word 'tarek', meaning 'those who left God' and was given to them by disappointed Muslim preachers who tried in vain to convert the Tuareg to Islam centuries ago. Tuaregs travel from southern Algeria to northern Nigeria and from western Libya, as far as Mali.

The 'harkis', Algerian Muslims who sided with the French in the war of independence, fared much worse, thousands were denied visas to France and murdered by Front Liberal Nacional (FLN) troops. 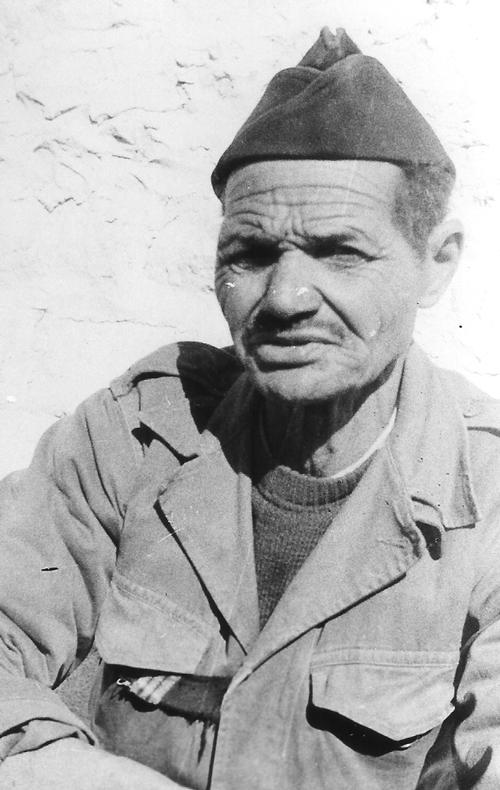 Harki fought with the French in the War of Independence Photo: Poussin Jean CC 3.0 Unported no changes made

Approx. 90% of the total population of Algeria lives in the northern coastal region, the other 10% lives in the oases in the Sahara. About 60% of the Algerian population lives in cities, and that number is growing. In addition to the metropolis Algiers, Annaba, Batna, Biskra, Blida, Constantine, Djelfa, Oran, Sétif, Sidi Bel Abbès and Tébessa are cities with more than 200,000 inhabitants. The largest city in the Sahara is the southern Tamanrasset with about 100,000 inhabitants. 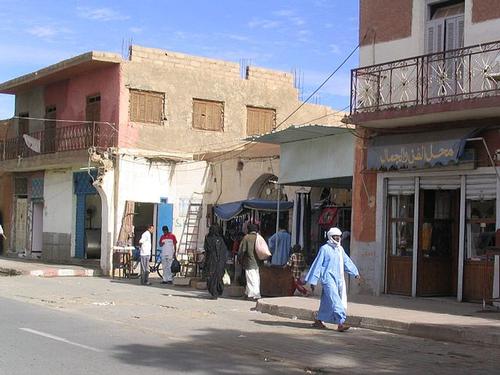 Street scene in the Sahara city of Tamanrasset, AlgeriaPhoto: W Robrecht CC 3.0 Unported no changes made

Most Europeans disappeared after independence, as did the group of Jews. More than 1 million Algerians live in France. 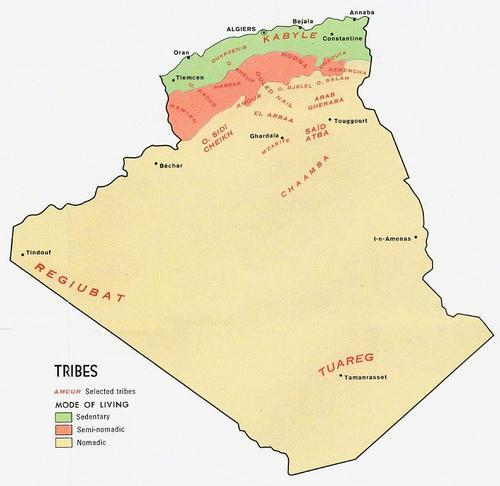 Rai music, now popular among Algerian and Moroccan youth, was first heard in the second half of the 20th century as a modern version of 'chaabi', traditional late 19th century Western music. A typical chaabi song consists of a sombre, sad text, accompanied by an orchestra of about 12 people with violins, mandolins and percussion instruments. The songs often carry a very strong moral message.

Rai was born in the northwestern city of Oran after independence and the lyrics usually contain a humorous take on a particular event. The singers, first only men and later also women, were initially accompanied by musicians with traditional instruments such as gasba (reed flute), darboeka (vase drum), bedir (frame drum) and karkabou (metal clappers), later gradually replaced by trumpet, violin, accordion, keyboard and electric guitar. Improvisation was an important characteristic of rai, from the sixties of the last century, partly under the influence of European pop music, different rai styles emerged, including various rai rock bands. Young people also sang more and more lyrics about love in all its aspects. Islamic fundamentalists banned rai in the nineties of the last century during the religious-political turmoil. This even culminated in the murder of some rai singers, including the well-known Cheb Hasni in 1994.

One of the most important rai producers was Rachid Baba Ahmed (1946-1995), also murdered in 1995 during the civil war by Islamic fundamentalists, who felt that Rai was far too concerned with sexuality, alcohol and more generally "depraved" Western culture. In the west, Cheb Mami is one of the most famous rai singers due to his 2000 duet with Sting in the song 'Desert rose'. 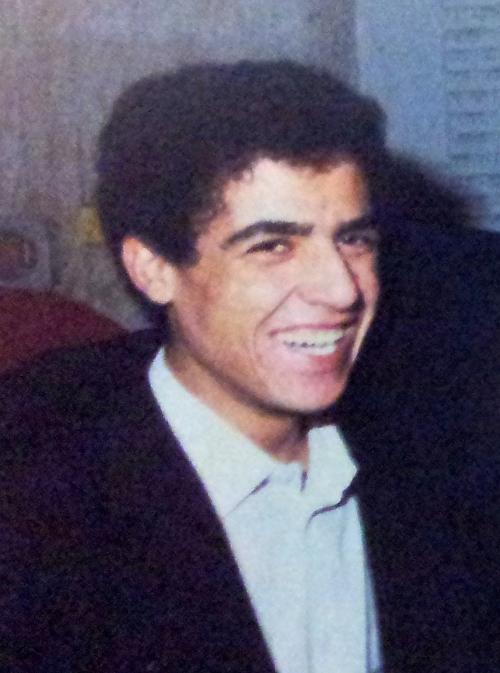 The Tuareg are a Berber tribe living in the Sahara and the Sahel, particularly in the countries of Algeria, Burkina Faso, Libya, Mali and Niger. The Tuareg are from the Fezzan region of Libya and have migrated south over the centuries, but are now more often tied to one place than before. This situation has not been going on very long, their traditional camel nomadism is not long ago and urban Tuareg are a fairly new phenomenon. At the beginning of the 19th century, the Tuaregs resisted the French invasion of their area, but by the beginning of the 20th century they were definitively defeated and assimilated into the French sphere of influence. The fiercest resistance was fought in Southern Algeria, including by the famous Moussa Ag Amastan.

The Tuareg are made up of different tribes and clans, and the main groups in Algeria are the Kel Ahaggar of the Tassili du Haggar and the Kel Ajjer of the region around Djanet in southeastern Algeria. In recent decades it has been fairly quiet between the Tuareg and the authorities in Algeria, in contrast to countries such as Mali and Niger. The most legendary Tuareg leader was an Algerian woman: Tin Hinan was a heroine and spiritual leader who founded a kingdom in the Hoggar Mountains. According to the Algerians, the Tuareg men cover their faces in shame that their greatest leader was a woman, but that is of course a myth. The truth is that the Tuaregs have a matriarchal society and do not have to wear a veil, unlike the men. The veil for men is called a 'tagel must' and is believed to ward off evil spirits, in addition to providing protection from the desert climate. Men start wearing a veil when they grow up and it often covers the entire face except for the eyes. 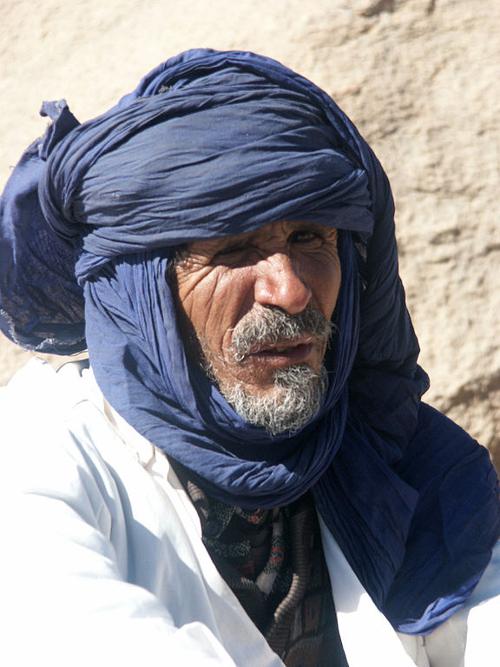 Tuareg man from Algeria in traditional clothingPhoto: Garrondo CC 3.0 Unported no changes made

Tuareg society is very hierarchical with a peerage and in earlier times slaves from black Africa. The merchants among the Tuareg had the highest prestige, higher than the farmers and nomads. The Tuareg are also called the 'blue men' after the color of their costume and turbans, although many more colors exist today. The Tuareg speak the Berber language Tamasheq, an Afro-Asiatic language with its own Berber script, Tifinagh. The Tuareg have been mainly Sunni Muslims from the 16th century onwards, but not very fanatical and combined with traditional religious practices. They are known for their fine art, jewelry, leather and their typical sword, the 'takoba'. It is estimated that there are about 25,000 Tuareg in Algeria, mainly in the Hoggar. 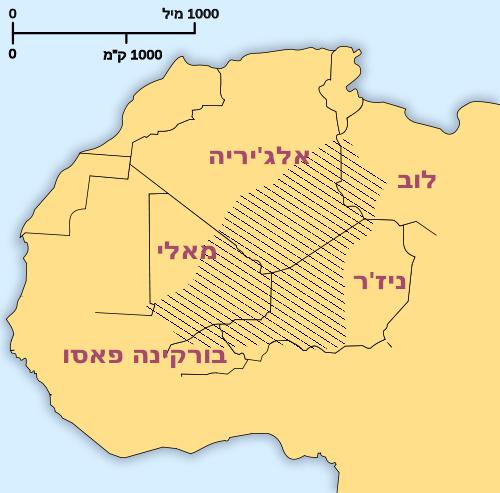 Territory of TuaregsPhoto: Mark Dingemanse CC 2.5 Generic no changes made