Algeria is a presidential republic with a multi-party system, with the president being the head of state and the prime minister the head of government. The executive power is in the hands of the government and the legislative branch consists of the government and the two chambers of parliament, the First Chamber or Conseil de la Nation and the Second Chamber or Assemblée Populaire Nationale. 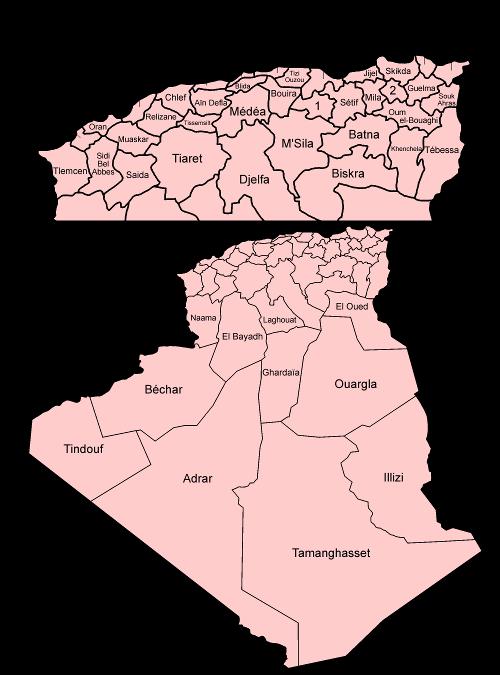 Although Algeria is currently a constitutional republic with a democratically elected parliament, there are the military and a number of powerful 'civilians', the so-called 'décideurs', which are still the main forces of power in the country. Algeria is divided into 48 provinces or 'wilayas', 553 districts or 'daïras' and 1,541 municipalities or 'baladiyahs'. The name of the capital of each tier of government is also the name of the administrative unit.

By constitution, all provinces have far-reaching powers in the field of economics and diplomacy and are governed by an Assembly Populaire Wilayale (APW). A province is headed by a governor or 'wali' appointed by the president of Algeria, who is responsible for implementing the decisions of the parliament. The Speaker of Parliament is elected by the Members of Parliament, who are elected by Algerians through elections.

The capital of a district is called the district seat or 'chef-lieu de daïra'. Each district is divided into a number of municipalities. The capital Algiers is the only city in Algeria divided into districts and municipalities. A district is governed by a district head or chef-lieu de daïraa elected by the president of Algeria. In November 1996, the constitution was revised by referendum. This revision placed a lot of power in the hands of the president (head of state). His responsibilities include defense, foreign policy, the appointment or removal of the prime minister, the appointment of the governor of the National Bank and the judges. The president is elected for a term of five years and can be re-elected again and again since a change in the constitution in 2008.

Legislative power rests with the parliament, which consists of two chambers, namely the Assemblée Popular National or 'al-Majlis al-Sha'abi al-Watani' (Lower House) with 462 members and the Conseil de la Nation or 'al-Majlis al-Umma' (Senate) with 144 seats. The members of parliament of the Assembly are elected for five years by direct elections. One-third of the Council is appointed by the President and two-thirds are indirectly elected from the councils of municipalities and Wilaya’ s. The members of the Council are elected for six years. 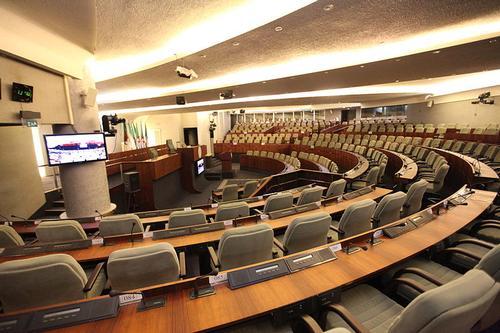 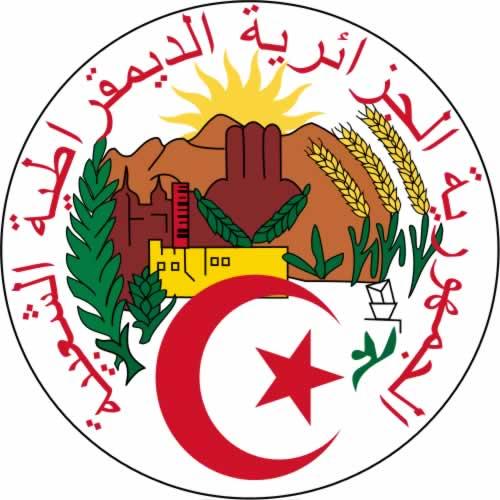 Algeria Coat of ArmsPhoto: Jackaranga CC 4.0 International no changes made

Algeria has a multi-party system with many political parties, for example in 2012 44 parties participated in the parliamentary elections. With so many parties, all of which must be approved by the Home Secretary, it is virtually impossible for any political party to gain a majority in parliament, and coalition governments are inevitable. Under the 1996 constitution, no parties may participate in parliamentary elections based on 'religious, linguistic, racial, sexual or regional' differences.

The parliamentary elections of May 30, 2002 changed the composition of the Assemblée Populaire Nationale. The FLN won 199 of the 385 seats, a gain of 128 seats. The RND, which is a refuge for ex-FLNers who do not want any concessions to the religious fundamentalists and Berbers, plummeted to 48 seats, a loss of 107 seats. Islamist parties gained a small seat but their representation in the parlement remained small. The FFS and RCD who have their electoral base in troubled Kabylia boycott the elections. Voter turnout (42%) was a low point.

FLN leader Ali Benflis entered his second term as prime minister after the 2002 elections. Backed by much of the FLN, he made an attempt in early 2003 to eliminate Bouteflika as a presidential candidate. However, a decision to that effect by an FLN congress was declared illegal by a court and in May 2003 Benflis was fired by Bouteflika. RND leader Ahmed Ouyahia took over the leadership of the government.

In contrast to 1999, when Bouteflika's rival candidates withdrew at the last minute, the election was open to choice. The battle was between six candidates: the incumbent president Bouteflika and Ali Benflis, both of the (FLN), Abdallah Djaballah, leader of the fundamentalist MRN-Islah party, who represents the voice of the Islamist opposition in parliament, Said Sadi, leader of the (RCD), Louisa Hanoune, leader of the Trotskyist Parti des Travalleurs (PT) and Ali Fawzi Rebaine, founder of the (AHD 54) a nationalist party. Relevant to the climate in which the elections took place is that Abassi Madani and Ali Benhadj, respectively president and vice-president of the currently banned FIS in 1991, were released in July 2003 after twelve years in prison.

Incumbent President Bouteflika was re-elected President of Algeria in the first round on April 8, 2004 with 84.99% of the vote. The first five years of Bouteflika's presidency have been dominated by attempts at national reconciliation ( ‘concorde civile’ ) and a reorientation of Algeria on Europe. There was an amnesty for Islamist militants and an association agreement with the EU. Since the spring of 2001, when riots in Kabylia outbreaks, the Berber issue is back on the political agenda. MP Ouhaiya, himself Berber, reached an agreement with local representatives in 2005, but the president did not want to go so far as to make Berber the official language. By decree of February 27, 2005, the president amended family law, which slightly improved the position of women. This decree was ratified by parliament on May 4, 2005.

The 462 seats in parliament were elected in 2012 by 42.9% of Algerians entitled to vote. The socialist Front de Libération Nationale (FLN) won the elections brilliantly with 220 seats, the moderate Islamists became the second party with 66 seats. As is so often the case, a fair poll was doubted.