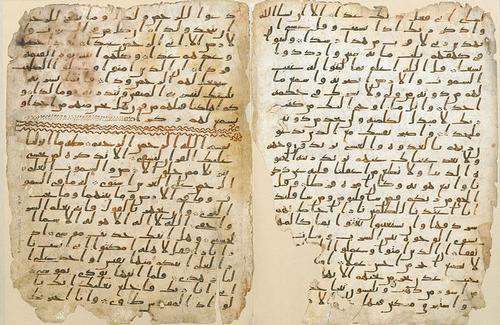 The actions and words of the Prophet Muhammad caused Islam to spread rapidly in the 7th century in the Arabian Peninsula. Mohammed is said to have been visited by the archangel Gabriel, who solemnly read to him the holy word of Allah (God). These words of Allah were put in writing and we now know that as the Quran. Mohammed was the last of a series of prophets, including Adam, Noah, Abraham, Moses, and Jesus, who had been sent to earth by Allah. The words of Muhammad thus took the place of the words of all previous prophets and the Quran also states how the people should live. Muhammad's message spread rapidly, eventually reaching the Atlantic coast in the west and the outlying islands of Indonesia, the largest Muslim country in the world, in the east.

Islam is based on five 'pillars', which should give structure to the daily life of Muslims. The first pillar (shahadah) is the Islamic testimony 'there is no God but Allah and Muhammad is his prophet'. The second pillar (salat) is the duty to pray five times a day in the direction of Mecca. The third pillar (zakat) is the giving of alms, in the United Arab Emirates 10% of the assets are taxed. The fourth pillar (saum) is the fasting month of Ramadan, during which no eating or drinking is allowed between sunrise and sunset. The fifth pillar (hajj) is the pilgrimage to Mecca, which must be accomplished at least once in the life of a Muslim.

The two major schools of Islam are Shia Islam and Sunnism. This dichotomy arose almost immediately after the death of the Prophet Mohammed in 632 AD. and concerns the succession of Mohammed. Sunnis believe that Muhammad had not appointed a successor and therefore made their own choice between Muhammad's two fathers-in-law, and the choice fell on Abu Bakr, the father of Muhammad's favorite wife Aishah. Shites believe that Muhammad had indeed appointed a successor, namely Muhammad's husband daughter Fatima, and thus his son-in-law, Ali ibn Abi Talib. Ali was murdered and his followers demanded that his descendants succeed him. According to the Sunnis, anyone can become a leader of the Muslim world if he sees to the proper exercise and interpretation of the rules of Islam. Shias live mainly in Iran, southern Iraq, Kuwait and as a minority in countries such as India, Pakistan, Lebanon and a number of Gulf states, including the United Arab Emirates. Sunnis, about 85% of all Muslims anyway, live mainly in countries such as Saudi Arabia, Pakistan, Afghanistan, Indonesia and many countries in the Middle East. 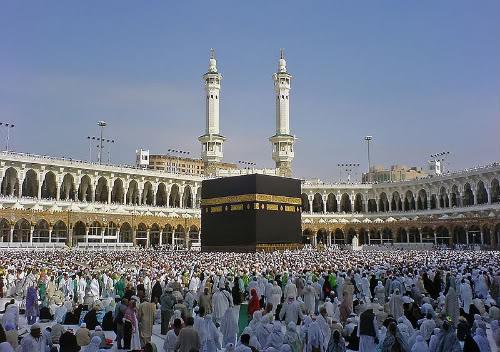 Mecca is always crowded as a place of pilgrimagePhoto: Muhammad Mahdi Karim CC2.5 no changes made

According to Article 7 of the UAE Provisional Constitution, Islam is the UAE's official state religion. The government subsidizes nearly 95% of mosques and pays imams. About 5% of the mosques are completely private, and a number of mosques receive large private donations. About 75% of the population of the United Arab Emirates are Sunni Muslims.

Dubai also has large Christian, Hindu, Sikh, Buddhist and other religious minorities. Abu Dhabi has a thriving Christian community. Non-Muslim groups may have their own places of worship where they can freely practice their religion. However, the distribution of religious literature is strictly prohibited under penalty of criminal prosecution, imprisonment and deportation.

The Sheikh Zayed Mosque is the seventh largest mosque in the world (approx. 22,000 m2), the largest mosque in the United Arab Emirates and can accommodate 40,000 Muslims, but non-Muslims are also welcome at certain times. The mosque houses the largest Iranian-made carpet in the world (5,627 m2), the largest candlestick in the world (diameter 10 m, height 15 m, weight 12,000 kg), 28 types of marble, 82 domes and four minarets, two of which largest are 115 meters high. The mosque is named after its founder and first president Sheikh Zayed bin Sultan Al Nahyan, who is also buried in the building, which was completed and opened in 2005. 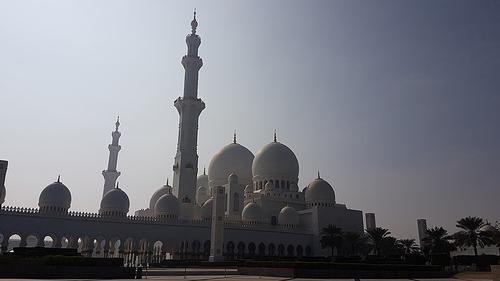 In 1992, the remains of the only Christian monastery in the United Arab Emirates were discovered on Sir Bani Yas Island. Archaeologists estimate that the monastery was built around AD 600, but was abandoned in around 750.