There is a wide variety of climate types in Switzerland. From polar climate-like in the high mountains above the snow line to almost subtropical in the southern alpine valleys. In general Switzerland has a transitional climate, from sea to land climate. The shape of the landscape has a major influence on the climate. North of the Alps a Central European climate occurs, south of the Alps a Mediterranean climate type. It can even be said that every part of Switzerland has its own climate. For example, the north face of a mountain may have dry steppe vegetation, while the south face is covered with dense forests. Another striking example is Sion, which has an average annual rainfall of almost 600 mm. Thirty kilometers away, Rochers de Naye mountain receives an average of 2600 mm of precipitation per year. 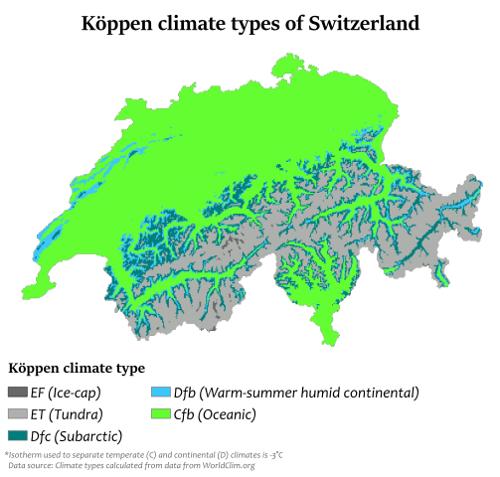 The weather has an unstable character, also because depressions often linger between the mountains. Switzerland is quite rich in rainfall. The Alps and Jura force the humid westerly winds to rise and provide quite a lot of precipitation, which falls most often on the French side of the Jura and on the western and northern edges of the Alps. As a result, on the high plateau behind the Jura and in many Alpine valleys, areas in the rain shadow, much less precipitation falls. The driest climate in Switzerland prevails in the Rhone Valley. Weather conditions can change quickly. For example, the temperature can drop very quickly, especially above 2000 meters. In winter, the phenomenon of temperature reversal occurs when heavier cold air is in the valleys and on the high plains and causes heavy fogging there, while in the higher parts the solar radiation creates higher temperatures.

Many areas in Switzerland are covered with snow in winter. The great lakes moderate the temperature on the Swiss Plateau in both winter and summer.