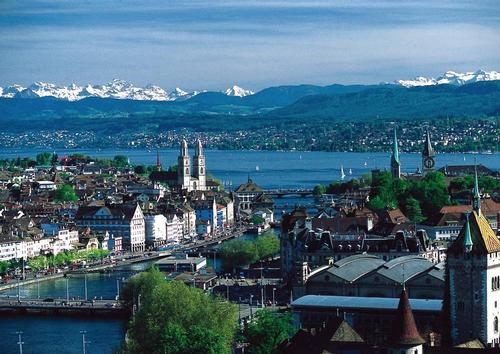 Zurich is located 408 m above sea level where the Limmat River leaves Lake Zurich. The city is surrounded by wooded hills such as the Zürichberg and the Uetliberg. The Old Town stretches on both sides of the Limmat River. The Limmat flows out of the lake, first turning north and then gradually turning west. The geographic center of the city is the Lindenhof, a small natural hill on the west bank of the Limmat.

Zurich, depending on the definition used, has a humid continental climate, with four distinct seasons. The wind direction is very important for the climate of Zurich. If the wind blows from the west, there is often rainfall. If the wind comes from the other side from the east or northeast (Bise), there are often high-pressure situations. The Föhn wind, which plays an important role in the northern Alpine valleys, has a limited influence on Zurich. The coldest average monthly temperatures were measured in January (0.5 °C) and the warmest temperatures were measured in July (17.6 °C). On average there are 88 days with a minimum temperature below 0 °C. There are an average of 30 summer days (above 25 °C) per year. Zurich has an average of 1,482 hours of sunshine per year. The 1,136 mm of rainfall is spread throughout the year.

A Carolingian castle was built in the 7th century and the Fraumunster Abbey in 853. The monastery disappeared, but the eponymous church still reminds of this period in Zurich's history.

Citizens of Zurich take the oath in 1351 Photo: Public Domain

On May 1, 1351, citizens of Zurich were required to take the oath and together with the cantons of Lucerne, Schwyz, Uri and Unterwalden they formed the Swiss Confederation. Zurich thus became the fifth member of the Confederation.

Zurich proclaimed itself a republic in 1648. The Swiss Federal State was founded in 1848. Zurich was accidentally bombed by the Allies during the Second World War.

Today, Zurich is undisputedly one of the most important financial cities on the planet. Many leading banks and financial institutions are based here, or at least have a presence in this rich city. 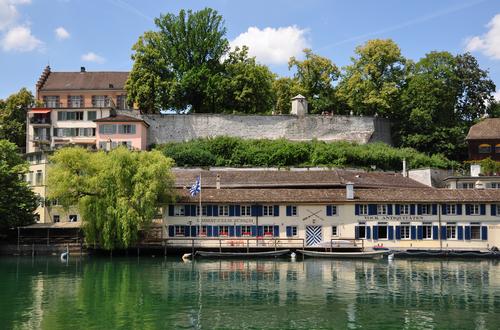 Most of Zurich's attractions are located within the area on either side of the Limmat River, between the main train station and Lake Zurich. The churches and houses of the old town are clustered here, as are the most expensive shops along the famous Bahnhofstrasse. The Lindenhof in the old town is a historic site with a Roman castle and the later Carolingian imperial palace. There are a number of worth seeing churches in Zurich with highlights being the Grossmünster, Fraumünster and St. Peter with the clock with the largest dial in Europe. Zurich is also known for its museums, which showcase the country's great cultural and historical artifacts. In the Barengasse museum you can see the history of the city in the 18th century. 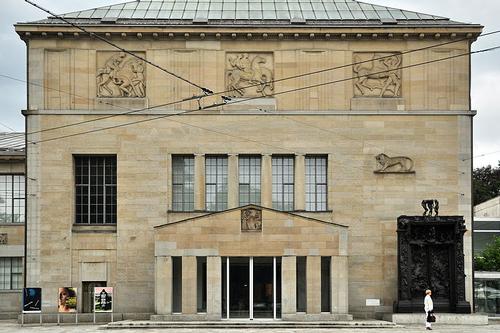 Kunsthaus Zurich has one of the largest collections of classical modern art in the world. The Kunsthaus was founded in the early 20th century and features a large number of Dadaist works within its collection. Many people come here to view Monet's water lily paintings and Alberto Giacommetti's works, especially on Wednesdays when admission is free

Museum Rietberg has a large collection of antique Asian art. Museum Bellerive is the museum for fashion, architecture and design. Other interesting museums are the Kunsthalle Zurich, the Migros Museum and the Design Museum of Zurich and the Swiss National Museum.

The Zoological Garden, the Botanical Garden of the University of Zurich, the Chinese Garden and the Üetliberg, a mountain in the Swiss plateau with a height of 813 meters, are other points of interest in the city.

Shopping in Zurich is a pleasure. The people of Zurich enjoy some of the best living standards in the world and the general prosperity means that shopping takes on an excess. You'll find the latest luxury and international brands, as well as a host of quirky boutiques with locally designed and crafted specialties. The city is not necessarily the cheapest shopping destination on the planet, but in terms of offering, it is truly world class. Unique are fine chocolate, Swiss pocket knives, watches, embroidery, linen and handmade clocks.

Flea market on the Bürkliplatz in ZurichPhoto: Jay8085 (CC BY 2.0) no changes made

Markets: On Saturdays from May to October, Bürkliplatz is filled with stalls during the weekly flea market. Antiques and handmade objects are sold at Rosenhof in the Old Town, Thursdays and Saturdays from March to the end of November.