Kenya (officially: Jamhuri ya Kenya; English: Republic of Kenya), is a presidential republic in East Africa and a member of the Commonwealth of Nations. Kenya, together with Djibouti, Eritrea, Ethiopia, Sudan and Somalia, belongs to the 'Horn of Africa'. 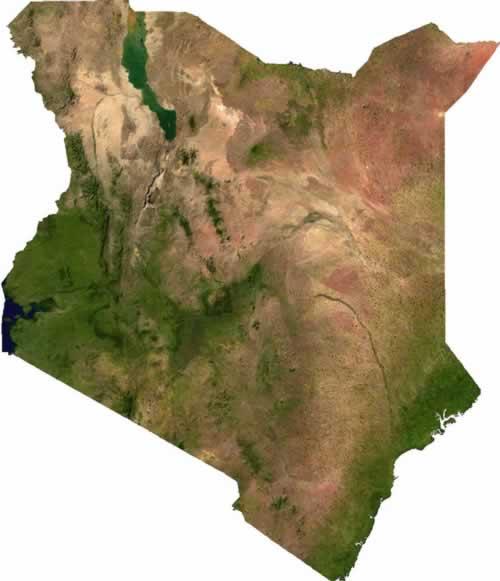 Map of KenyaPhoto: Unknown CC3.0 Unported no changes made

On the coast there are a series of coral reefs and a number of islands, including the Lama archipelago and Mandu. From the up to 200 km wide and up to 150 m high coastal strip, the land slowly rises to a parallel, 150 to 300 meter high plateau area. In the north and northwest this turns into an area with high plains of 300 to 1500 meters, belonging to the East African plateau, which in the southwest merges into the Kenya Highlands, 1500 to 3000 m high.

The Highlands are intersected in a north-south direction by the East African Rift, which is a tributary of the North-to-South extending African Rift or Great Rift Valley, which is 600 to 900 m below the surrounding area and is flanked by high volcanoes. The rift is 48 to 64 kilometers wide. Near Lake Naivasha, the rift is about 2000 meters above sea level. 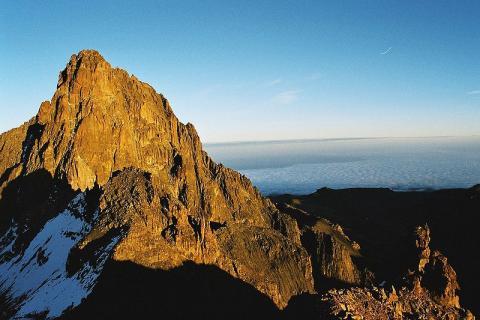 Here we also find the second highest mountain in Africa, Mount Kenya (5199 meters). This area is the most fertile in the country and the lower parts of the mountains are used intensively for agriculture. This rift contains a number of lakes, including Lake Rudolf, Lake Nakuru, Lake Naivasha and Lake Magadi, which is largely situated on the territory of Kenya. Lake Victoria, of which only the eastern end is in Kenya territory, lies between the two rifts. Near Lake Victoria is also Kenya's second highest mountain, Mount Elgon (4321 meters). The Great African Rift runs from the Middle East to Malawi and is more than 5000 kilometers long.

Western Kenya consists of a rolling hilly landscape that stretches from the Sudanese border in the north to Tanzania in the south. In the south, the fertile landscape changes into a vast savannah landscape. Here are the largest and most popular game reserves. South of the Amboseli reserve, Mount Kilimanjaro (5895 meters) rises, the highest mountain in Africa, which, however, lies entirely in Tanzania. North and East Kenya consists of a mountainous landscape with lots of scrub that changes into a desert landscape where rain rarely falls. Here we find the most wild and unspoiled landscape in Kenya.

Partially navigable rivers are the Sabaki and the Tana.