Italy is the most popular holiday destination in the world after France, the United States and Spain. About 35 million tourists visit Italy every year. For tourists, Italy is a country of mainly sun, water and culture. The tourists therefore generally go to the Adriatic and Ligurian coast, the major cultural centers of Rome, Florence and Venice and the winter sports resorts in Trentino-Alto Adige. The lakes in the north of Italy are also very attractive for tourism.

Bologna is a large university city in the north of Italy with a beautiful medieval center. Not only Pisa has a leaning tower, Bologna even has two! They were built in the Middle Ages by wealthy families. The Asinelli and the Garisenda in Piazza di Porta Ravegnana are made of brick and are 97 and 48 meters high respectively. The Asinelli can be climbed, the Garisenda cannot. One thing is certain: the towers together form the landmark of Bologna. The Palazzo dell’Archiginnasio is a beautiful old university building. Today the building serves as a library and houses one of the Bologna's greatest attractions: the Teatro Anatomica. The theater dates from the 17th century and was used as an autopsy site until 1803. The dissections took place under the watchful eye of a priest who immediately intervened if the autopsy would detract from religious norms and values. 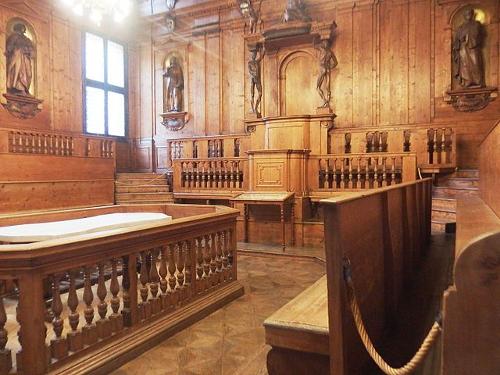 There is an incredible amount to see in Florence, below are some of the most famous sights, especially from the Renaissance. The famous and enormous Uffizi Gallery is located on the banks of the Arno River and the beautiful art collection is decorated to illustrate the art story of Florence. There are many famous masterpieces on display, such as Botticelli's Birth of Venus, Titian's Venus of Urbino, Michelangelo's Holy Family and Piero della Francesca's “Duke and Duchess of Urbino”. The museum owns the art collection of the de Medici family, which was bequeathed to Florence in 1737, on condition that it would never leave the city. Partly because of this, the Uffizi Gallery remains one of the most important art museums in the world. The Bargello is a huge building built in 1255 and it was originally the police headquarters and also a prison. The Bargello is now home to the National Museum, which contains one of the most impressive collections of Renaissance sculpture in the world. Highlights include works of art such as Michelangelo's 'Drunken Bacchus', Donatello's 'David', Giambologna's 'Mercury' and also the designs submitted by Brunelleschi for the doors of the Duomo. The Duomo, or Florence Cathedral, is in the heart of the city. Dominating the city with its enormous dome, the Church was designed in 1334 by the city architect Giotto and completed in 1359, although it took almost two centuries to finally complete it. Today it is still the tallest building in Florence and one of the city's most famous landmarks. The huge dome was designed by Brunelleschi and it was a revolutionary achievement as it was the largest dome of the time and was built without scaffolding. The inner shell provided a platform for the beams that supported the outer structure. There are 463 steps that lead to the top of the dome, where visitors can enjoy panoramic views of the city. Other highlights include the many beautiful frescoes, detailed ceiling mosaics and stained glass windows created by some of the great artists of the time, such as Vasari, Zuccari, Donatello, Uccello and Ghiberti. Milan is one of the most important and stylish cities in Italy. Most of the main attractions in Milan are in the center and there is plenty to see. The most important church is the enormous Duomo, the fourth largest cathedral in the world, which was built for about four centuries. There is also the Castello Sforzeco, a fortress built in 1368, which was later converted into an elegant and beautiful Renaissance residence. The Scala (Opera House) was completed in 1776 and shows beautiful theatrical productions. The Santa Maria delle Grazie is a beautiful church dating back to 1463, where 'The Last Supper' by the famous painter Leonardo da Vinci can be seen. Naple's historic city center is the largest in Europe, covering 1,700 hectares. In 1995 it was designated a World Heritage Site by UNESCO. In the vicinity of the city there are many interesting sights such as Pompeii and the Bay of Naples. Naples itself is a vibrant and bustling city, full of remarkable historical and artistic treasures and narrow, winding streets with small shops. The top sights are the Palace of Caserta and the Roman ruins of Pompeii and Herculaneum. 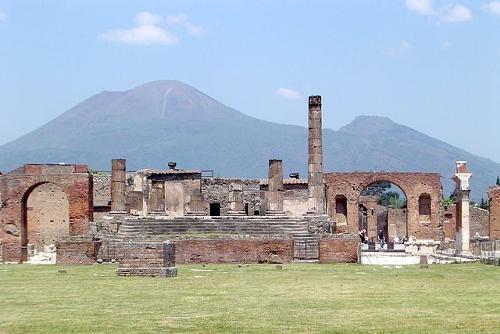 Pompeii with the volcano Vesuvius in the background, Naples, ItalyPhoto: Qfl247 CC 3.0 Unported no changes made

Rome has been the capital of Italy since 1871. It is a gigantic city with almost 3 million inhabitants. Rome has a rich history in which the city has been the most powerful place of Antiquity, the Roman Empire and the Catholic world. Rome and the Vatican City are really overflowing with interesting sights. An attraction in Rome that really appeals to the imagination is the glorious Colosseum from the time when Rome was the center of the Roman Empire. Construction of the gigantic complex was completed in AD 80 under the authority of Emperor Titus. The name of the structure most likely refers to the colossal size of the amphitheater. With a height of 57 meters, a width of 156 meters and a length of 188 meters, it was not only the largest amphitheater in Rome, but in the entire Roman Empire. Every year many interested people go to Rome to visit the Vatican City. The Vatican does not officially belong to Rome and Italy; it is an autonomous state within the city. The Vatican City is the smallest independent country in the world and it is also affectionately referred to as a miniature state. Vatican City was founded in 1929 and is the Catholic power center of the world, the head of the Vatican City is therefore the Pope. 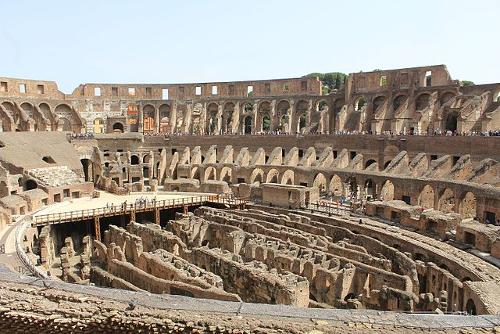 Inside the Colosseum, Rome, ItalyPhoto: Nicolelouisee CC 4.0 International no changes made

Trieste is often mistakenly overlooked by tourists who usually choose to visit the more famous Italian cities with their highly developed tourist infrastructure, such as Venice (162 km to the west). Trieste is one of the most unique cities in Italy and much of its former grandeur is still clearly visible in the form of imposing buildings with beautiful neoclassical facades. With its many cultural attractions, quality museums, coffee houses and ancient Roman remains, Trieste is the perfect base for those wishing to explore the region. The beautiful central square is without a doubt the most typical image of Trieste. It is the largest square, facing the sea, in Europe and covers 12,280 m². The square's name has undergone numerous changes over more than 700 years. Originally it was known as St. Peter's Square, after the church of the same name. Also, for a long time, it was simply referred to as Piazza Grande, before taking the name of Piazza Unità after the city became part of the Kingdom of Italy after WWI. The square is lined with some of the city's most impressive and important buildings, as well as several great monuments and a few historic cafes and coffee houses. 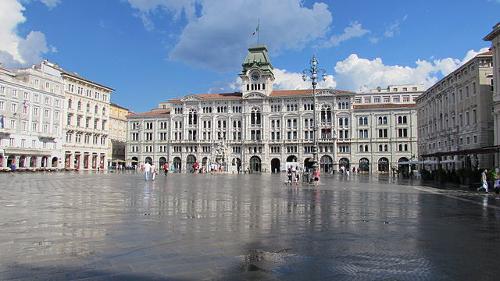 Venice is breathtaking and completely unique. The city was founded about 1500 years ago and consists of more than 100 different islands connected by 150 canals, 400 bridges and many old streets. Venice's historic center is divided into six districts (sestieri) - Cannaregio, Castello, Dorsoduro, San Marco, San Polo and Santa Croce. All buildings in Venice are propped up with posts driven deep into the ground to create a solid foundation. Piazza San Marco is the beating heart of Venice. This square has been a popular tourist attraction for centuries and is also home to many hundreds of pigeons. The square is the center of Venetian life and there is always an exciting atmosphere in this busy square, with many cafes with often live music. Undoubtedly one of the most beautiful squares in the whole world, St. Mark's Square is surrounded on three sides by arcades with public buildings. The beautiful round domes of the remarkable Basilica San Marco add to the atmosphere. As well as the 15th-century Torre dell'Orologio tower and the two pillars with the city's patron saints: the figure of Theodore and of course the winged lion of San Marco himself. Verona is best known for serving as the backdrop for William Shakespeare's play Romeo and Juliet. There are a number of sights that are directly related to this, such as the Montechi House (house of Romeo) and the balcony in the Casa di Guilietta. Verona has a beautiful old center with interesting buildings and squares, a cathedral, a fortress and several church buildings that are more than worth a visit. Historical highlights include the Roman arena, the 18th-century Piazza Bra and the many surrounding palaces and the beautiful Renaissance garden, the Giardino Giusti, where Mozart is said to have regularly walked there. 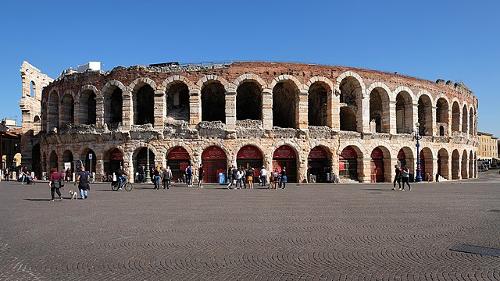