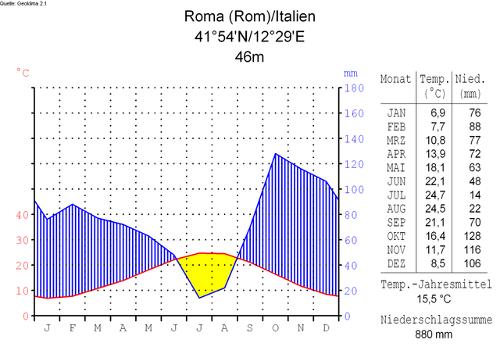 Nevertheless, a number of different climate regions can be clearly distinguished.

For example, the Po Valley has hot summers with temperatures almost as high as in Sicily, but winters are cold and humid, with a lot of mist and fog. The January temperature of Piacenza can drop below freezing point and there is often snow for days on end.

The lake area on the south side of the Alps is more sheltered and therefore has a milder climate. The northern part of the Apennines and the high areas in Tuscany and Umbria are covered with snow for months in winter. An exception is the Italian Riviera on the northwest coast, where the winter is always mild with a dry season in the summer, albeit with a fair amount of rainfall. Southern Italy has very dry and hot summers and this is a Mediterranean climate in a more extreme form with also a much higher percentage of sunshine than in the rest of the country.

In the highest mountains in the Alps is snowing all year round. The limit of the eternal snow is located in Aosta Valley at 3,108 meters and at 2,545 meters on the east side of the Alps.

There are a number of local winds on and near the Italian peninsula. Well-known is the sirocco, a warm, humid southern wind from North Africa. The fresh westerly to northwestern wind, which replaces the sirocco after passing the depression, is called tramontane. 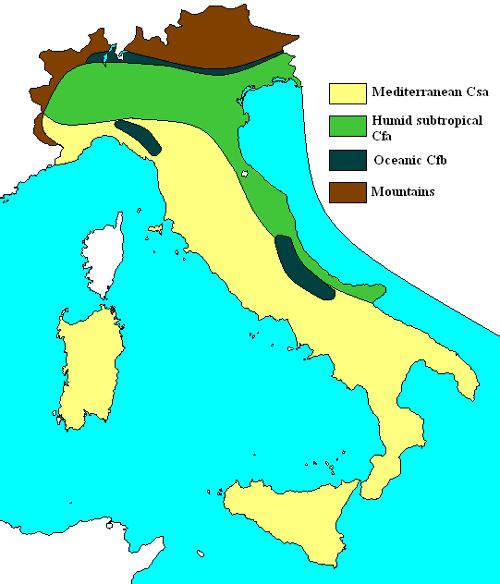 The same name is also given to northerly or northeasterly winds, which bring in cool continental polar air. The cold mistral from the Rhône valley is also felt in the Genoa area. Local cold winds are called maestrale there. Along the northern coasts of the Adriatic Sea, in the winter half year, there is a dry, cold downwind, the bora, which originates from the Dalmatian coast and causes storms.