In 1947, the English colony of India was divided into Hindu India and Islamic Pakistan. In 1950, India officially became a republic and immediately became the largest democratic parliamentary republic in the world. In 1950, a constitution based on Western democratic fundamental rights was also adopted. The President of India is also the head of state, but the real power lies with the government, especially the Prime Minister. The government of India is based in the capital New Delhi.

The Federal Republic of India consists of seven Union Territories controlled from New Delhi and 25 states each with its own government and parliament.

Goa has been an official state of India since 1987, headed by a governor appointed by the government in New Delhi. The government of Goa (prime minister and ministers) is under the authority of the governor. Police, education, agriculture, and industry are controlled by the state government of Goa. The Goa Parliament, the Legislative Assembly, has 40 members. Goa is divided into two major districts: North Goa with the capital Panaji as center and South Goa with Margo as center. Goa is further divided into eleven subdistricts called talukas.

The 374 towns and cities are controlled by 183 panchayats. Each panchayat has a number of so-called “wards” who each choose a member of the panchayat. The members of the panchayat elect a chairman / leader, the sarpanch.

Goa has the following talukas (subdistricts) with their capitals:

For the current political situation of India see chapter history.

Goa was an education center long before the Portuguese arrived. During the Kadamba Empire (around 1000 AD), Goa was an important Hindu religious center with medical, philosophical and architectural institutes. The educational system varied from pathshalas, where elementary education was given, to agraharas, Hindi university education. Margao already had a famous university with a library of more than 10,000 books. After the arrival of the Portuguese, education was taken up by Christian religious orders such as the Jesuits. 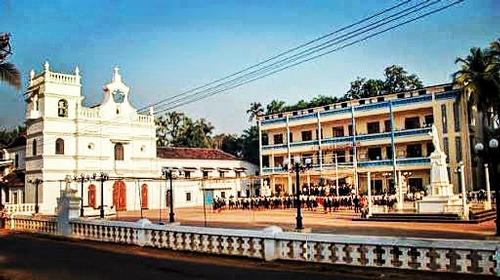 The religious orders were also important in connection with developing new techniques and insights. For example, the third printing press from the east was made in the Rachol Seminary. Here the first Konkani grammar was also printed and the first Bible translated into Konkani. The priests also provided primary education and were also very active in music education. This early structured education offering developed an intellectual elite in Goa that has produced many respected medics, lawyers and journalists. Today, education levels in Goa are on average higher than in the rest of India. Approx. 75% of the Goan population has followed at least primary education. The average for all of India is approximately 52%. Approximately 67% of the Goan women attended education. The average for all of India is 39%!

Education is based on the English system. From five to fifteen years of age, primary education is followed, concluded with an exam. After this basic education, one can specialize for another two years in art, commercial, professional or physics education. Education up to and including the 10th degree is free. The 11th and 12th degrees are no longer free. After the 12th degree, one can still follow three-year courses. Until 1985, students were required to attend university education outside Goa. Goa University was established in June 1985. At the moment about 1600 students are studying there. There is also a medical and dental training in Bambolim.