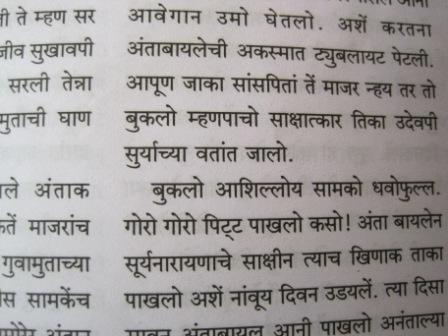 Konkani originated from Sanskrit, just like Hindi. Konkani is written in five different ways. For example, Christians write Konkani in the Roman script and Hindus with the characters of the Devnagari script, just as Hindi is written.

At the time of the Portuguese rule, the upper classes of the population in particular spoke Portuguese. In 1684, the Portuguese language was even made mandatory in Goa. Portuguese is still spoken as a second language by an ever smaller group of Goans.

In education, English is still the primary language, although fierce discussions about letting go of anything to do with the former, hated rulers continue to flare up.

Although Hindi and Konkani both originate from Sanskrit, large differences can be observed. Sometimes the two languages are very similar, sometimes not at all.