The capital Panaji (or Panjim) is located on the Mandovi River and has about 90,000 inhabitants. More than 1.5 million people live in Goa. The average population density is approximately 400 inhabitants per km2. The population is very mixed because mixed marriages between Christians and Hindus were not unusual and Goa had long been an international trading center. Particularly noteworthy are the Sarasvati Brahmins, members of the high sub-caste, who moved to Goa from North India in the 12th century and they are still Goa's trading elite.

India is known, among other things, for its controversial caste system. The caste system states that a person is a member of a certain caste at birth (jati = birth) and cannot change caste during his life. He can only enter a higher caste by doing good deeds. In the next life he is rewarded for this because he is born in a higher caste. The following castes can be distinguished, in order of importance: 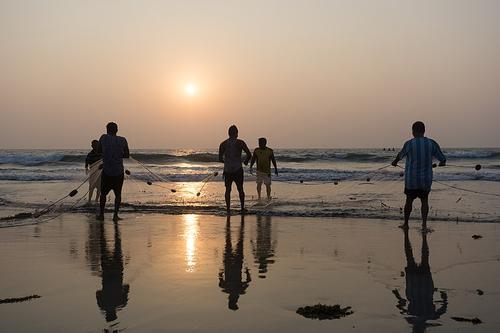 Many thousands of intermediate castes have arisen as a result of marriages between castes. The caste or pariahs who call themselves dalits form a separate group. Everyone has been legally equal since 1950 and much has changed for the better. Special training programs have been established and there are reserved places at universities. There is also a national political party for the casteless, but especially in the countryside in the small villages, the dalits are still struggling.

As in all of India, the population in Goa has exploded over the past 40 years. For example, in 1961 Goa had 590,000 inhabitants, while now more than 1.5 million live there. The population is subject to large fluctuations. For example, many Indians come every year, especially from the nearby states of Karanataka, Kerala and even Rajasthan. Some are looking for permanent work, others take advantage of the tourist season. Wealthy people from the rest of India buy their second home in Goa. Furthermore, Goa is flooded for two-thirds of the year by tourists and it will not be long before the number of tourists who visit Goa will exceed the number of inhabitants of Goa. Approx. 65% of the Goan population are Hindus, about 30% are Christians, about 5% are Muslims and less than 1% have a different religion. The average life expectancy is slightly higher than that of all of India, which is 66.8 years. (2017)