Goa, the smallest state of India, located on the west coast of the Indian subcontinent, has an area of 3701 km2. In the north and northeast Goa borders the state of Maharashtra and in the south and southeast the state of Karnataka. 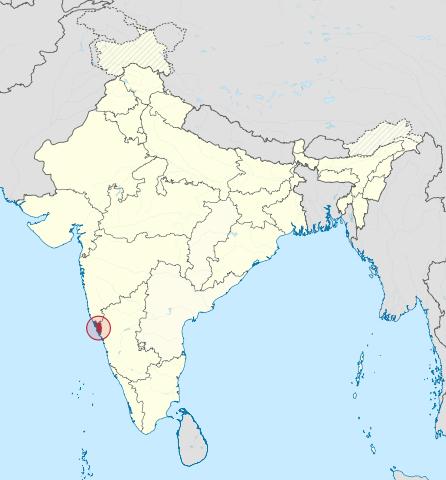 Location Goa in IndiaPhoto: TUBS CC 3.0 Unported no changes made

The small area of the state has a very varied landscape. The west coast, which borders the Arabian Sea, consists entirely (105 kilometers) of sandy beaches, rocks and bays. Behind the beaches are dunes, palm forests and large rock formations. Some rivers flow into the sea here. Goa generally looks green and fertile. During the monsoon there is so much rainfall that the vegetation has sufficient moisture all year round. The lowlands of Goa have alternating rice fields, mango plantations and deciduous forests. The Sahyadri Mountains form the almost natural border between Goa and India and are part of the Western Ghats, a series of ridges that separate the Deccan Plateau from the Malabar coast. Behind the Ghats is the large, dry and barren Deccan plateau.

Topographically, Goa can be divided into three regions. In the east of the state are hills and mountains of the Western Ghats, the ridge that separates the Deccan Plateau from the coastal region. The Western Ghats cover nearly 600 km2 of the total area of Goa. The average height is ± 800m. In the area of the Sahyadri Mountains are mountains such as the Sonsagar (1166m) and the Catlanchimauli (1107m). The Sahyadri Ghats are covered with tropical forests of deciduous trees and bamboo forests. From the Dudhsagar, a spectacular waterfall falls 600 meters. The relatively underdeveloped area is very important for almost the entire water supply of Goa. The seven rivers that flow through Goa also spring into the Ghats. The Mandovi is the longest river in Goa with 77 km.

Bridge across the Mandovi River, GoaPhoto: Amol Gaitonde CC BY-SA 3.0 no changes made

The Ghats were once densely forested, but increasing logging causes many problems. The Midland region lies between the Western Ghats and the coast. This area mainly consists of plateaus between 30 and 100 meters high. Sometimes these plateaus extend to the sea. Fortifications were previously built on the plateaus by the Portuguese. In the somewhat lower areas there are many fruit trees, herbs and areca nut plantations. A lot of iron and manganese is also found on the plateaus and exploited by open mining.

For visitors to Goa, the coastal region with its golden yellow beaches is of course the most important. The vegetation is largely determined by the influence of ebb and flow on the rivers. These influences can be noticed up to 40 km inland. Along most rivers we find mangrove forests that thrive on the salt-like soil.

Unique are the khazahs, low-lying areas (± 15,000 ha) that are irrigated with salt water through a sophisticated system of locks! This is used, for example, for keeping sea fish farms or for salt extraction.