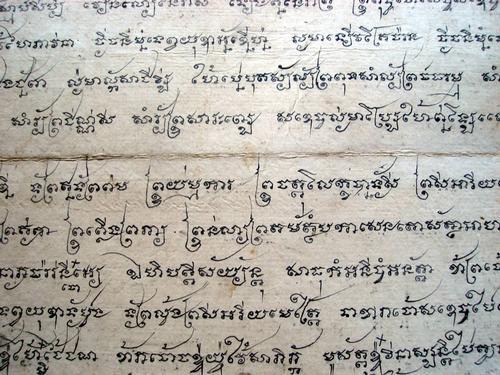 The official language of Cambodia is Khmer, spoken by most Cambodians. Khmer belongs to the Austro-Asian Mon-Khmer group, is one of the oldest languages in Southeast Asia and is also spoken in the Mekong Delta in South Vietnam. Khmer is related to the languages spoken by mountain peoples in Vietnam and Laos, such as Hmong.

Since the 14th century, Khmer has borrowed much of its vocabulary from Pali, a language of southern India. What is special is that it is written from left to right, but without spaces between the words. Khmer has an informal, neutral and formal form. Which form is chosen depends on the gender, age and social status of the speaker and the person being addressed.

Khmer grammar does not seem too difficult. There are no articles and the nouns do not have a plural form. Verbs are also not conjugated.

Unlike Vietnamese and Thai, Khmer is not a tonal language, but an atonal language: it consists of one or two syllable words with an emphasis on the second syllable. The root of many Khmer words corresponds to Vietnamese.

The Mon-Khmer languages are influenced by Sanskrit, the language of Hinduism, and are written in the Old Indian Sanskrit alphabet. The alphabet consists of 23 vowels and 33 consonants, which produce strange sound combinations for Westerners.

Older Cambodians from the colonial period often still speak French, but English is on the rise, especially among the young.