One of the most pristine and isolated holiday destinations in the world, and therefore incomparable to any other destination, is the Buddhist priestly kingdom of Bhutan (Land of the Thunderous Dragon or Druk Yul), where people's happiness is the official measure of prosperity. Due to the lack of contacts with the Western world, the number of tourists is even limited by the government, a large part of the population is still living as they did centuries ago and usually wears traditional clothing. Surrounded by Himalayan giants, the adventurous tourist can enjoy beautiful, spectacular mountain landscapes and nature, Buddhist monastic fortresses or 'dzongs', traditional Buddhist monastic festivals or tshechus with their mask dances, surprisingly picturesque farm houses and a friendly population who will do everything they can to make it to make the tourist as pleasant as possible. 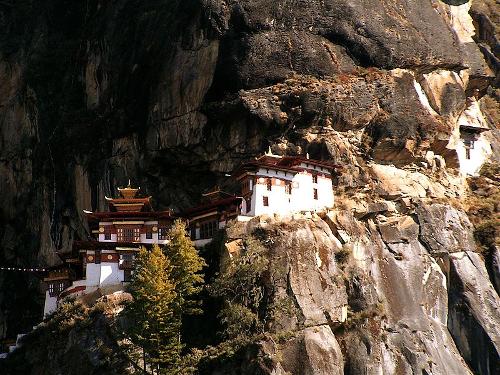 The most famous monastery is Taktshang or 'Tigers Nest', which seems to be glued to the mountains. Bhutan's major festivals are those of Paro (1645), Thimphu and Jambay Lakhang. where Jambey, the Buddha of the Future is worshiped, and where the Jambay Lakhang Festival is held in honor of Guru Rimpoche, who introduced Buddhism to Bhutan. Khurje Lakhang is one of the holiest sites in Bhutan with a temple that houses a huge statue of Guru Rimpoche from 1625 and an ancient temple in which Guru Rimpoche is said to have defeated the demon Shelging Karpo. The Tamshing Temple (1505) is famous for its beautiful murals and the Konchogsum Temple dates back to the 8th century with statues of Maitreiya Buddha, Guru Rimpoche and Pema Lingpa, the founder of the Tamshing Temple. The Bumthang region consists of four valleys and is one of the most sacred areas in Bhutan. In one of the four valleys, that of Chokhor, are the main temples and most of the monastic fortresses. The Haa Valley has many monasteries and you can go hiking and mountain biking on marked routes. The city of Paro is a tourist attraction with Taktshang Monastery, Rinpung Monastery, Paro Monastery and the National Museum of Bhutan. In the former capital Punakha is the important monastery Punaka Zhong, where the annual Mahakala is celebrated, one of the most important festivals in Bhutan. In the Chume valley you will find, among other things, the Tharpaling monastery from 1352 and the Choedrak monastery at 3800 meters. 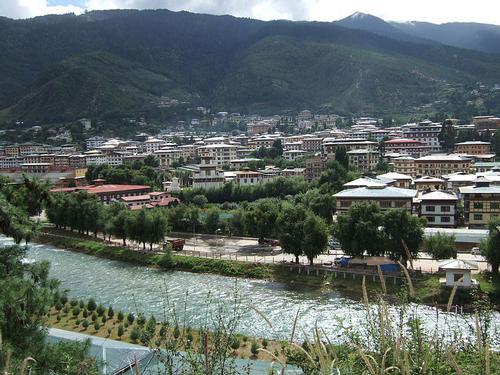 The capital, Thimpu, is built entirely in traditional Buddhist style and has attractions such as the Textile Museum, the weekly Sabji Bazaar and the large stupa Memorial Chorten. The beautiful town of Trongsa is home to the royal family and a beautiful example of Bhutanese architecture, the Trongsa-dzong. On top of the monastery is a watchtower with a beautiful view of the valley.

The largest book in the world is kept in the National Library. The illustrated book is entitled 'Bhutan', weighs 68 kilos and is more than two meters tall. One page is turned every month. 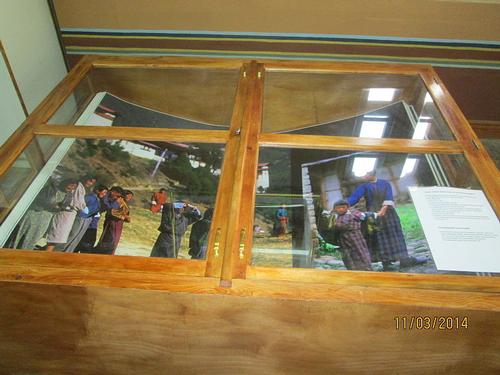 Largest book in the world in the Bhutan National LibraryPhoto: Rudolph.A.furtado in the public domain

One of the most photographed events in the streets of the capital city of Thimphu are the traffic control officers with their white gloves, who make a complete show. Thimphu is the only capital in the world without traffic lights. 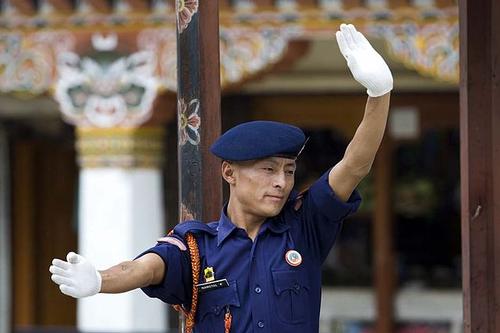 Cops regulate traffic in Bhutan without a traffic lightPhoto: Steve Evans CC 2.0 Generic no changes made