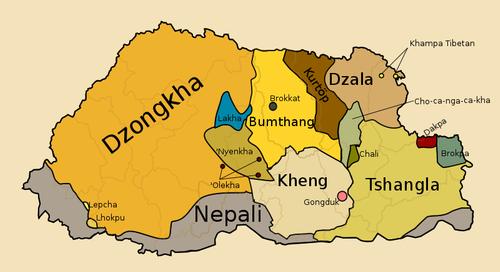 Although Dzongkha is related to Tibetan, the differences in pronunciation are so great that people hardly understand each other. The spelling of Dzongkha and classical Tibetan are identical.

Due to the many remote areas, a number of languages of regional minorities have been preserved to the present day. Some Tibetan dialects are Cocha Ngachakha in Kuri-chhu valley, Drokpa and Dakpakha and Merak, Sakteng and adjacent areas of Tashigang district, Layakha and Lunakha in nomadic Gasa district, and Lakha and Droke in parts of Bumthang district .

Most of the languages of Central Bhutan, Bumthang, Khyeng, Mangdelung and Kurto, have a strong affinity with the Monpa dialects of Tawang, from the Sino-Indian border region of Arunachal Pradesh. The main language in Eastern Bhutan, Tsangla, appears to be related to the Lopa languages of Tibet and Arunachal Pradesh. In South Bhutan, where the population is mainly of Nepalese descent, Nepalese is of course the most important language. 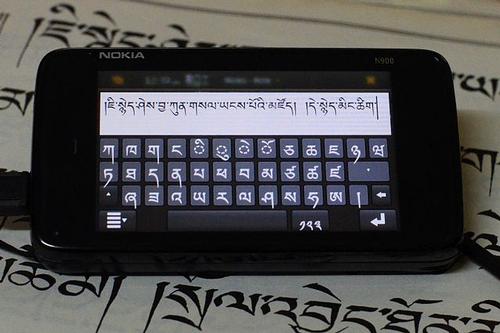 The etymology of the name Bhutan is still a point of contention among historians and linguists. Bhutan could be descended from the Sanskrit word 'Bhotant', meaning 'the end of Tibet', or from 'Bhu-uttan', meaning 'high land'.

British explorers believed that the name Bhutan was derived from 'Bhotsthan', which means land of the 'Bhotias' (Bhotia is Sanskrit for people of Tibet). Although the country's name abroad is always referred to as Bhutan, the people of Bhutan have referred to their country as Druk Yul, 'land of the thundering dragon' since the 13th century. People call themselves 'Drukpa'.

The naming system differs in Bhutan in the north and the south. In the north there are no surnames. Shortly after birth, each child is given two names, which are given by monks. They are usually names of traditional Tibetan origin with a religious background. In the south, under the influence of Hinduism, many people do have a family name. Brahmins keep their caste names, others are named after the ethnic group to which they belong.