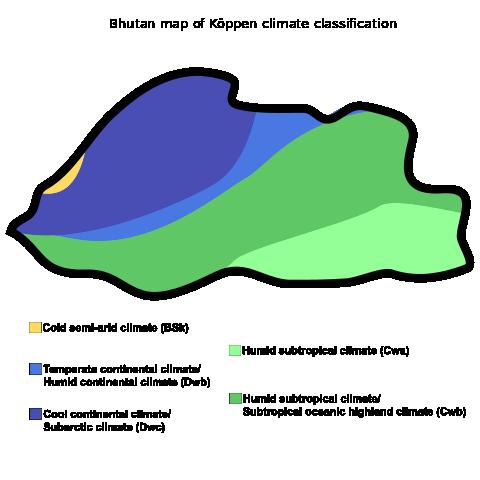 The climate Bhutan is as varied as the elevation in the country and is heavily influenced by the monsoons in June, July and August, especially in western Bhutan. In that area, 60-90% of the annual amount of rainfall falls during the monsoon season. The climate is humid and subtropical on the southern plains and foothills of the mountains, temperate in the Himalayan valleys in southern and central Bhutan, and cold in the north, with perpetual snow on the Himalayan peaks.

The temperatures also depend strongly on the altitude. The temperature in the capital, Thimphu, at 2,200 meters in West-Central Bhutan, ranges from 15 to 26°C during monsoon season, dropping to temperatures of -4 to 16°C in January. Central Bhutan has a cool temperate climate all year round. Southern Butan has a warm, humid climate with year-round temperatures between 15 and 30°C and summer peaks of up to 40°C in the valleys.

The dry period in Bhutan starts in early March and lasts until mid-April. Then the summer period starts with occasional rain showers until the pre-monsoon rains at the end of June. The summer monsoon lasts from the end of June to the end of September with heavy rainy periods advancing from the southwest. Typical for monsoon storms, held up in the north by the Himalayas, are prolonged rainy periods, very high humidity, floods, landslides and many days with fog or heavy cloud cover. The autumn period, which lasts from the end of September or the beginning of October to the end of November, is characterized by clear, sunny days and early snowfall in the higher parts of the country. Winter sets in from late November to March, with frost in much of Bhutan and guaranteed snowfall above 3000 meters. The northeasterly winter monsoon brings stormy winds from the high mountain passes. 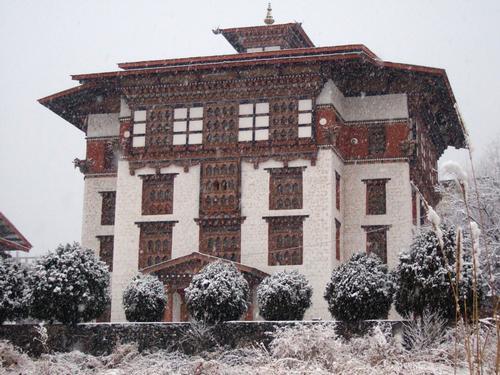 The best time for tourists to visit Bhutan visits are in October and November. Then the sky is often clear and there is plenty of sun with daytime temperatures above 20°C and at night around 5°C. The morning almost always starts with beautiful clear weather, after one o'clock in the afternoon it becomes a bit more cloudy and the wind blows a bit harder, in the evening and at night the weather is clear again with a beautiful starry sky.

In the period March-May it is already getting warmer and the chances of rain are greater. High mountain passes are often covered with snow until March at least. December-February is winter, but in the lowlands there is still plenty of walking and mountain biking. June-August is the period of the monsoon, when it can sometimes rain for days on end, causing mudslides as a nuisance. Hiking trails get wet and slippery and leeches attack people in great numbers. In September it can still rain heavily, the mud is still far from gone and clouds prevent the sunshine.