German is the seventh language on earth and is spoken by approximately 120 million people. Also related to German are Yiddish, Letzeburgs in Luxembourg, Pennsilvan in the United States and Schwyzerdütsch in Switzerland. German is closely related to, among others, Danish, Swedish, Norwegian, Dutch, Flemish and English.

High German is the language of the entire population. In Schleswig, Danish is also spoken and a small part of the country, around Cottbus and Bautzen, is bilingual; in addition to High German, West Slavic Sorbian is also spoken here.

Lower German or Flat German, which is still spoken in the northwest, has many similarities with the regional languages in the eastern Netherlands. 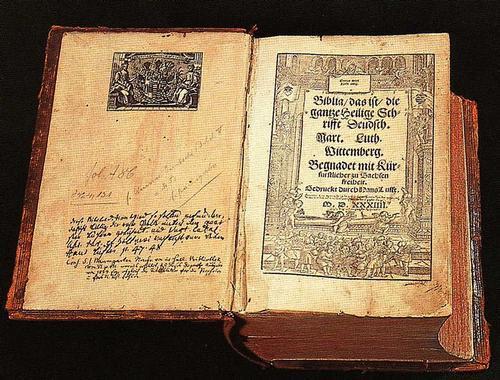 In the first century AD, the various West Germanic dialects did not yet form a close linguistic unity. It is believed that within the Carolingian Empire all Germanic tribes were considered linguistically related. In the south of Germany, the High German dialects gradually emerged, which showed a great uniformity due to language and sound shifts.

In the north, the Saxons continued to expand their power and a Lower German (Old Saxon) language area was established there. Both languages were strongly influenced by Christianity and the ancient Latin cultural tradition, especially in word formation and meaning.

In the period 800-1100 the German language area expanded further to the east and southeast. Between 1170 and 1250 German was strongly influenced by French and classical Middle High German, a courtly literary language, emerged.

From 1250, High German was increasingly used in official documents. The Lower German language area expanded from 1100 to the Oder, the Weichsel and also to the northeastern Netherlands. East of the Elbe and the Salle a so-called colonial East-Middle German language emerged with elements of different geographic origins.

Mainly through Martin Luther's translation of the Bible, the East-Middle German written language became the basis of the German “Schriftsprache”. This development was also further promoted by humanism and emerging national sentiments. The definitive establishment of contemporary grammatical and lexical norms was mainly due to the influence of grammarians in the 17th and 18th centuries. The classical literary language flourished at the end of the 18th and early 19th century. However, it remained a writing language often very different from the spoken dialects. The spelling of this written language was recorded around 1900.

In the old Bavarian 'Bezirken' Oberbayern, Niederbayern, Oberpfalz and parts of Oberfranken and the eastern Landkreis Bayreuth, Bavarian (Bavarian: Bairian or Boarian) dialects are spoken. In total, about 12 million people speak a Bavarian dialect. Due to the relatively small area, there are not many major differences between the various dialects, which can be subdivided into 'Nordbairisch', 'Mittelbairisch' and 'Südbairisch'.

Nordbairisch or Northern Bavarian extends north of the line Eisenstein-Regensburg-Ingostadt-Neuburg an der Donau to the point where the Lech flows into the Danube. Of the Bairian dialects, Nordbairian has retained most of the features of Middle High German.

Mittelbairisch or Middle Bavarian is the most widespread and, for example, is still used in a number of Munich-based media and stretches in a wide belt from Friedberg near Augsburg, Munich and Passau to Austria via the cities of Salzburg, Linz and Vienna to the Neusiedler See up to the Hungarian border. Especially in the city of Munich, Bairian is spoken less and less, certainly among the youngest generations.

Südbairisch or South Bavarian, the language of the high mountains, is spoken almost exclusively in Austria and South Tyrol, with the exception of the Werdenfelser Landes around Garmisch-Partenkirchen and the South Bavarian Inntal, which belongs to the Tyrol topographically.

The letters C and Y are not pronounced in Bavarian; the letters T and V are not spoken at the beginning of a word. It is striking that words in High German can differ enormously from Bavarian. Below are a number of striking examples: