Bavaria (German: Bayern or Freistaat Bayern) is a federal state (Bundesland) in the south and southeast of Germany, with Munich as its capital. The total area of Bavaria is 70,550 km², making it the largest federal state in Germany and just as large as the Benelux or Ireland. Bavaria covers 19% of the German territory. From west to east, Bavaria extends over a maximum distance of 384 km, from north to south the maximum distance is 362 km. The southernmost place in Bavaria is Einödsbach, the westernmost place is Großwelzheim, the easternmost place is Breitenberg, the most northerly place is Weimarschmieden. The most southern point in all of Germany is also in Bavaria: Haldenwanger Eck. Border marker 147 in the Haldenwanger Eck is the southernmost point in Bavaria Photo: Wolfgang Stranglmeier CC3.0 Unported no changes

Bavaria is bordered in the north by the states of Thuringia (381 km) and Sachsen (41 km), in the east by the Czech Republic (357 km), in the west by the states of Hesse (262 km) and Baden-Württemberg (828 km) and in the south and southeast to Austria (818 km). Bavaria also borders 19 km on Lake Constance, a lake that borders Germany, Switzerland and Austria. The total border length of Bavaria is 2706 km.

Northern Bavaria is an area with varied low mountain ranges (including Rhöngebirge with volcanic remains), hills, gently rolling fields (Franconia with many farms and vineyards), meadows, deciduous and coniferous forests and arable areas. Furthermore, this region is characterized by many medieval towns and villages, including Bamberg, Coburg, Miltenberg, Nürnberg and Würzburg.

In the north of Franconia (Unterfranken, Oberfranken and Mittelfranken) lies the terraced landscape of the so-called Fränkische Jura with plateaus and terraces at an altitude between 300 and 650 meters. Because the mountains here consist of limestone, there are many karst phenomena with their often bizarre, capricious shapes. The sunny slopes of the Fränkische Weinland around Würzburg are characterized by endless vineyards. Well-known nature reserves with alternating arable plots and wooded hills in Franconia are the Coburger Land, with the Staffelberg as the highest point (540 m), and Oberes Maintal. 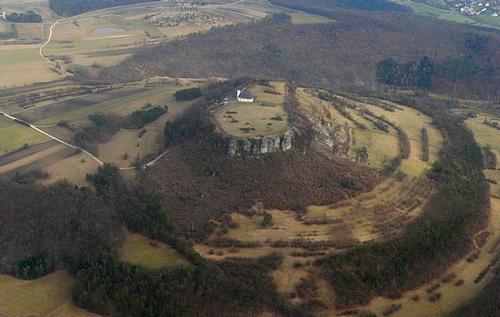 In the northwest of Franconia, in Unterfranken, is the 700-900 meter high volcanic Rhöngebirge, where the enormous basalt blocks stand out. You can hike in the nature parks Bergstrasse-Odenwald, Rhön and Spessart, interesting is the terraced landscape of the Frankenalb east of Nürnberg. In the south of Franconia lies the wooded Altmühltal, towards the north merging into the hills of the sandstone landscape of the Keuperstufe with the nature parks Hassberge, Steigerwald and Frankenhöhe. Even more to the north, against the Czech border, is the Fichtelgebirge with two peaks of more than 1000 meters, the Schneeberg (1051 m) and the Ochsenkopf (1023 m).

The landscape of Central Bavaria was and is determined by the Danube, the largest river in Bavaria, which has carved out a wide plain with many rubble and grit plateaus over time. The Danube flows from west to east through Bavaria, enters Bavaria at Ulm and leaves Bavaria (Germany) again at Passau, on the border with Austria. Downstream from the south are the main tributaries Iller, Lech, Isar and Inn, all of which have their source in the Alps; from the north Wörnitz, Altmühl, Naab and Regen.

The vast countryside consists of fields, meadows and dense forests. In the east flows the Inn, an important tributary of the Danube. This sparsely populated region has only a limited number of large cities, including Augsburg and Ingolstadt. The lowest point in Bavaria, 100 meters above n.a.p., is the Inn river near the village of Kahl am Main (Unterfranken). 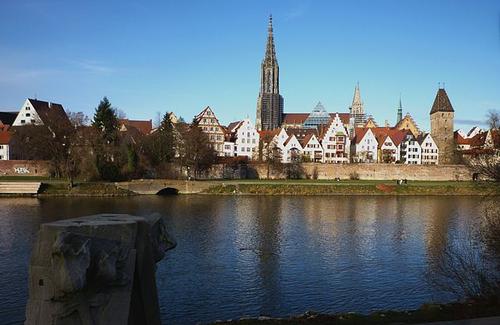 Cityscape Ulm, with the Danube in the foregroundPhoto: Franzfoto CC 3.0 Unported no changes made

Eastern Bavaria also has a somewhat rural character with low hills, many lakes, plains and only in the far east, on the border with the Czech Republic, with dense forests covered mountains of more than 1000 meters. The densely wooded, dark Bavarian Forest (German: Bayerische Wald) is one of the largest and most original forest areas in Germany and, together with the adjacent Bohemian Forest in the Czech Republic, forms the 'green roof of Europe'. The highest mountains, which do not look spectacular due to the worn peaks, are the Großer Rachel (1453 m) at Bayerisch Eisenstein, the Großer Arber (1450 m) and the Großer Falkenstein (1312 m). Very special is the 300 million year old 'Pfahl', a 150 km long and 30 meters wide quartz wall, which in some places can grow to a height of 750 meters. An area of more than 3000 km2 has the status of 'Naturpark', an area of 242 km2 has been the Bavarian Forest National Park since 1970. 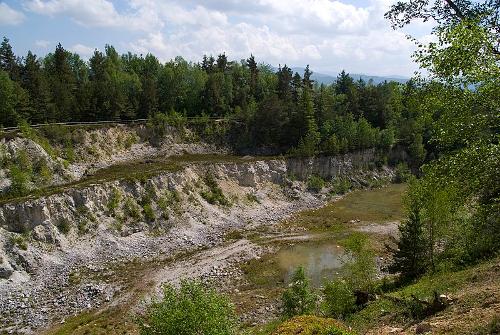 Also in Eastern Bavaria not many cities of great importance, only Landshut, Passau and Regensburg can compete with the mentioned places in Northern Bavaria from a historical and tourist point of view. The Danube winds here from west to east along fields and meadows.

The green Southern Bavaria has a varied landscape with plains in the north to the Bavarian Alps in the south. The Bavarian Alps are among the youngest (folding) mountain ranges in the world and stretch over a distance of 250 km from the northeastern shore of Lake Constance to the Salzachtal, just south of the Austrian town of Salzburg. The jagged shapes of the Northern Limestone Alps, pointed peaks, ridges, subterranean rivers, dripstone caves and even ice caves, consist of limestone and dolomite. There are still a few small glaciers in the Bavarian Alps, including the Blaueisgletscher, the northernmost alpine glacier, at the Hochkalter, and the Schneeferner at the Zugspitze. The largest and deepest mountain lake in Germany is the Walchensee at an altitude of 800 meters, with an area of approximately 16 km2 and a depth of almost 200 meters.

The Isar is an important tributary of the Danube (length 295 km, of which 260 in Germany) and this part of Bavaria also has a number of large lakes, including the Starnberger-Funf-Seen-Land with Wörthsee (4.3 km2), Pilsensee (1.95 km2), Weßlinger See (17 ha), Ammersee (47 km2) and Starnbergersee (56 km2). The largest lake in Bavaria and the third in Germany is the Chiemsee (80 km2). In the Chiemsee there are three more islands, the inhabited islands of Frauenchiemsee (also Fraueninsel, 600mx300m) and Herrenchiemsee, and the uninhabited Krautinsel. The highest lake (603 m) in Germany is the Königssee. There are extensive, silted wetlands around the lakes mentioned. 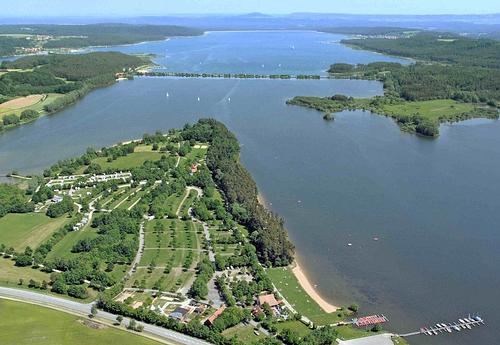 Another type of soil in these regions are the so-called grit plateaus, created by slowly flowing rivers. The Wettersteingebirge, part of the Karwendelgebirge, foothills of the Lofener Steinberge and the Berchtesgadener Alps, is located in the territory of Bavaria from the Northern Limestone Alps. Many peaks here are higher than 2000 meters and the tree line is between 1700-1800 meters, with deciduous forests on the lower parts and coniferous forests on the higher parts. The small alpine meadows are characteristic of a large part of this area.

The Allgäuer / Oberbayerische Prealps and the Chiemgau Alps are on average a lot lower, only the Wendelstein (1838 m), the Geigelstein (1808 m) and the Sonntagshorn (1961 m) rise above 1800 meters. In the Upper Bavarian Alps lies the Wettersteinsteingebirge with the highest mountain in Germany, the almost 3,000 meter high Zugspitze (2,962 m). The Berchtesgaden Alps also have, in addition to limestone massifs and karst plateaus, a number of high peaks, including the Hoher Göll (2522 m) and the Watzmann-Mittelspitze and Watzmann-Südspitze (both 2713 m). The so-called Prealps vary in height from 300 meters in the Danube Plain to about 1000 meters at the edge of the Prealps. A few dozen kilometers from the Alps lies the state capital Munich on a vast (gravel) plain. The Wettersteingebirge with the highest peak in Bavaria, the ZugspitzePhoto: Octagon CC 3.0 Unported no changes made 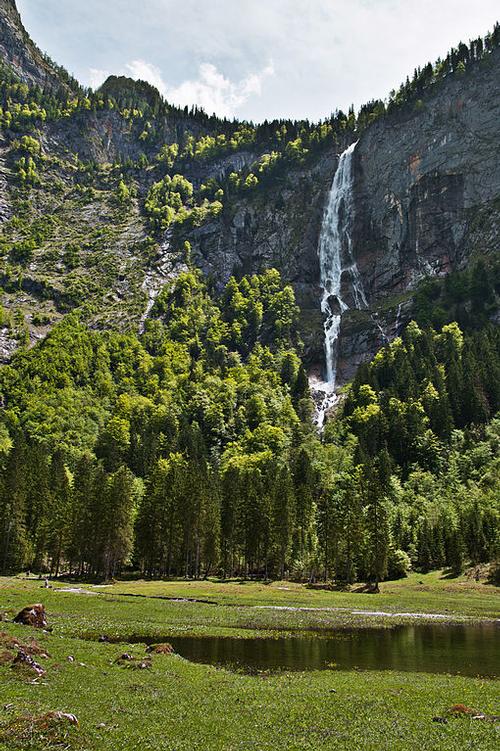